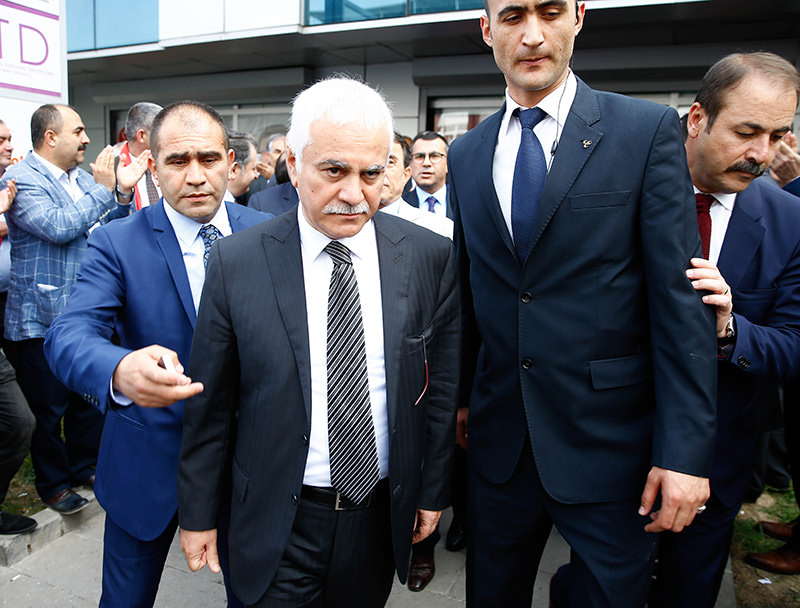 Intra-party dissident and chairman candidate Koray Aydın, who previously ran twice against current Chairman Devlet Bahçeli in 2003 and 2011, criticized leading dissident candidate Meral Akşener for her words and actions on Sunday after falling out of the consensus reached among four candidates that include himself, Sinan Oğan and Ümit Özdağ.

Speaking to Turkish broadcaster NTV, Aydın said four candidates had reached an agreement to gather in front of the chosen location for the emergency convention and hold the convention if possible. If not, Aydın said, they agreed to discuss? the situation with their attorneys, and make a joint press statement before leaving. He criticized that Akşener stayed in the area after the three candidates left and addressed the public, which created an unfair image that they left early.

Answering to the party administration's allegations that the controversial Gülen Movement backs the intra-party opposition, Aydın said that there was only one candidate that these accusations could be addressed to, Meral Akşener. He stated that it is apparent that the followers of the Gülen Movement attend one candidate's rallies and organizations with an overhelming majority, and that this Gülenist support focuses rather on Akşener than the other candidates. He said he and MHP voters are aware that this tendency is turning into her supporting organization.

Aydın underlined that this situation does not mean that Akşener herself is a member of the Gülen Movement, and he does not have any idea on whether Akşener is a member or not.

Amid the conflicting court rulings, Bahçeli previously said: "None of my brothers and sisters will become the pawn of a trans-oceanic-centered game and fall for the trap of a so-called congress. Attempting to paint the MHP as being in chaos, blocking the MHP is a sin that is heavy to carry."

Bahçeli also accused the dissident members of committing a crime by violating court rulings. "We have no party to hand over to the 'parallel [structure],'" he said in early April, adding that the date for a congress is March 18, 2018. Claiming that the Gülen Movement wants to design Turkish politics through the MHP, Bahçeli contended that it would never reach this goal. "I see people who scream out with joy. No one should have desires in this vein," he said.

Criticizing the Gülen Movement, Bahçeli accused what he called movement-affiliated people of hypocrisy over the appointment of trustees to the party. "I am telling this group that raised hell when trustees were appointed to their institutions: You deserve everything you have experienced so far. These [people] are hypocrites," Bahçeli said. He also labeled Gülen Movement-affiliated people as "the puppets of the United States and a disgrace to Islam."

Gülen Movement is being probed by Turkish authorities for forming an illegal organization with its cadres nestled in the judiciary and police to topple the government through fake evidence and illegal wiretappings.

On Sunday, dissident candidates defied a recent court order blocking the dissidents to hold an emergency convention, and gathered with thousands of supporters at the entrance of the Büyük Anadolu Hotel in the capital, Ankara, which was chosen as the location. However, the entrance was closed off by police barricades reportedly in line with instructions from the Ankara Governorate and dissidents were not allowed to enter the hotel.

Aydın stated that what happened in front of the hotel was a struggle for democracy, and thanked all MHP delegates and members for showing up. Dissidents in MHP accused the Justice Minister, Ankara Governorate and the government for meddling into MHP internal struggle, which was denied by government authorities.

MHP dissidents have been very local after the Nov. 1 elections, in which the party barely passed the 10 percent national election threshold and lost half of its deputies compared to the June 7 elections. Since then, Meral Akşener, Sinan Oğan and Koray Aydın have raised their voices against Bahçeli, who has ruled the party since 1997. Later, the dissidents were joined by vice chairman Ümit Özdağ.

The party administration also appealed to emergency convention decision at Turkey's Supreme Court of Appeals, which will announce its decision within this month.

A Turkish court accepted on dissidents' appeal against the stay of execution of another court on party's emergency convention. Meanwhile, the court which previously overruled the emergency convention upon party administration's request issued the same day a new stay of execution decision, increasing uncertainty on whether the convention will be held and whether it will be legally valid.