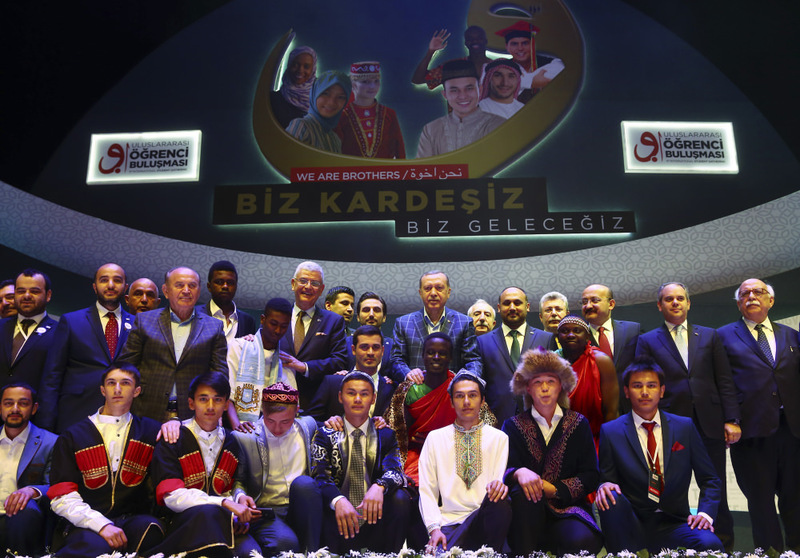 President Erdoğan said while Turkey has opened its doors to 3 million refugees fleeing the war in Syria, more prosperous EU member states have looked on and done little

Countries that have much better GDPs than Turkey turn a blind eye to the situation of more than 6 million Syrians who fled a bloody civil war in Syria that started in 2011, President Recep Tayyip Erdoğan said at the UDEF-TÜGVA 9th International Students Meeting in Istanbul yesterday.

"Our brothers and sisters in Syria have been slaughtered by a ruthless and illegitimate regime for six years – 600,000 people have been killed. Thirteen million Syrians have been displaced and 6 million of them have left their homeland," President Erdoğan said, adding that Turkey has opened its doors to 3 million refugees and put extra plates on the table for them.

Slamming some prosperous countries that failed to share the burden of the refugee crisis, Erdoğan said: "Countries that have much better GDPs look on this picture. Those who penned the Universal Declaration of Human Rights failed in this humanitarian test. Terrorist organizations such as DAESH and the YPG [People's Protection Units] carried out ethnic cleansing and massacres in places they occupied. As Turkey, we did not leave our Syrian brothers and sisters alone since the first day of the crisis."

Turkey, the country's northern neighbor, was one of the first countries to open its doors to Syrians displaced by war and sever ties with the brutal Assad regime, which violently suppressed any opposition. Five years on, Turkey still remains the safest haven for refugees who streamed into the country with few possessions, little or no money and no place to call home. Though Lebanon and Jordan, Syria's other neighbors, accepted the displaced, Turkey is lauded by the international community for offering the best accommodation standards to the refugees. Today, 2.7 million refugees from Syria live in Turkey, a figure that was unimaginable when the first group of 252 refugees quietly entered the country in 2011. Turkey, although seasoned in hosting refugees as a transit country for migrants from Asia and the Middle East heading to Europe, was apparently unprepared when the exodus of the displaced from Syria started. Still, it managed to mobilize quickly, and tent camps established to host the early arrivals were rapidly upgraded to small neighborhoods with proper housing for refugees.

CHP leader's statements same as those of terror groups

Railing at Republican People's Party (CHP) Chairman Kemal Kılıçdaroğlu's statement that a change to a presidential system cannot be made without shedding blood, Erdoğan said his statement includes elements that terror groups use.

"The outcome of every election he ran is obvious. He now thinks about whether he can get an outcome with blood. No you will not. Whatever the nation says will happen," Erdoğan said.

On Thursday, the Ankara Public Prosecutor's office filed an investigation into Kılıçdaroğlu for his comments about a presidential system leading to bloodshed, comments that have drawn a strong reaction from politicians, saying he is inciting people to crime and rioting. The investigation concerns the potential violation of Article 214 of the Turkish Penal Code on incitement to commit a crime. The investigation is into Kılıçdaroğlu's criticism of efforts to include a presidential system in a new constitution, in which he said: "Such a system cannot be realized without the shedding of blood."