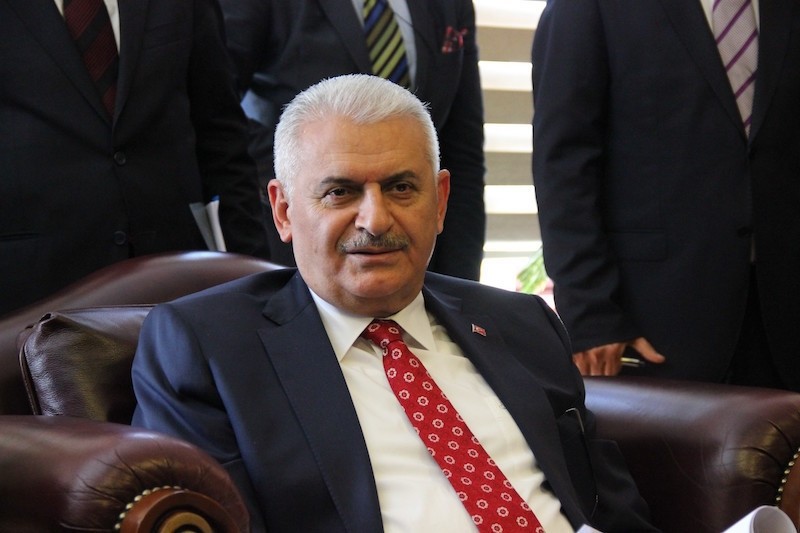 Transportation, Maritime Affairs and Communications Minister Yıldırım has been announced as the candidate for chairman at the AK Party’s emergency convention. He pledged to remove the PKK terror and vowed full harmony with Erdoğan

The ruling Justice and Development Party (AK Party) announced on Thursday that Binali Yıldırım will be the sole candidate for chairman at its Sunday emergency convention. Yıldırım is one of the co-founders of the AK Party and has been the transport, maritime and communication minister for five terms during previous AK Party governments. He is replacing outgoing chairman and prime minister, Ahmet Davutoğlu, to become the new prime minister. In a press meeting at AK Party headquarters in Ankara, party spokesman and Deputy Chairman Ömer Çelik announced Yıldırım as the lone candidate. "Our esteemed friend Binali Yıldırım has been chosen by a huge consensus within the party," Çelik said, and declared there is not the slightest disagreement between the founding chairman President Recep Tayyip Erdoğan and the AK Party cadre. In his first address Yıldırım said that as one of the party's founding members it is a great honor to be nominated as the next chairman and thanked Davutoğlu for his service. "The AK Party is a party that has a cause; a party with which the nation is building its future and walking toward the future by protecting its past.

Yıldırım: We will remove terrorism from Turkey

Focusing on Turkey's ongoing fight against PKK terrorism, Yıldırım vowed that the government will remove the curse of terrorism from Turkey. "Our nation should feel at ease, we will erase the trouble of terrorism from Turkey's agenda," he said, and added that his next duty would be to visit the southeastern province of Diyarbakır to meet families who have lost relatives in the security forces during clashes with the PKK. "I'll visit Diyarbakır to give solace to our people who have been brutally slaughtered," Yıldırım said.

After he was announced as the candidate for AK Party chairman, Yıldırım paid a condolence visit to Diyarbakır to the families whose relatives were killed in the PKK attack on Thursday last week. He reiterated his pledge to purge the country of terrorism. "Nobody is able to split our 1,000-year brotherhood," he said. The explosion occurred about 25 kilometers from Diyarbakır and killed 17 people, including 13 civilians, and injured 23 others.

The announcement came hours after the AK Party's top decision making body, the Central Executive Committee (MYK), evaluated the results of three days of in-house surveys to determine the party's nomination for chairman. Even though AK Party officials did not announce the results of the in-house surveys, sources close to the AK Party indicated that Yıldırım was well ahead in the survey results. The established practices of the AK Party do not embrace races between contenders for leadership posts, and rather impose a single candidate whose name appears as a result of lengthy internal deliberations.

The AK Party's second emergency convention will meet on Sunday in Ankara and 1,468 delegates that represent Turkey's 81 provinces are expected to participate and vote for the next chairman. The AK Party was founded in 2001, and at Sunday's convention Yıldırım is expected to become the third chairman of the party after Erdoğan and his successor Davutoğlu.

Binali Yıldırım, nominated to be the third chairman and fourth prime minister of the ruling Justice and Development Party (AK Party), was a co-founder of the party in August 2001, and has served as transport minister (with other portfolios, including maritime transport) in five Turkish governments (under Prime Ministers Abdullah Gül, Recep Tayyip Erdoğan, and Ahmet Davutoğlu).

Yıldırım, 60, was born in Refahiye, in the eastern Erzincan province. He earned a bachelor's degree at the Istanbul Technical University's Maritime Faculty and in 1991 graduated with a Master of Science from Sweden's World Maritime University.

Under then-Istanbul Mayor Recep Tayyip Erdoğan, Yıldırım served as director general of the Istanbul Fast Ferries Company (IDO) from 1994 to 2000.

Yıldırım won his first seat in Parliament as a deputy for Istanbul in the fall 2002 general elections, which swept the AK Party into power, and served as minister of transport and communications through 2007.

In the 2007 general elections, he was elected an AK Party deputy from the eastern Erzincan province and continued his tenure as transport and communications minister.

After being elected as a deputy from the Mediterranean province of İzmir in the 2011 general elections, Yıldırım became minister of transport, maritime, and communications.

In 2014, he ran for mayor of the İzmir Greater Municipality but came in second, with 36 percent of the vote. On Nov. 24, 2015, Prime Minister Ahmet Davutoğlu reappointed him minister of transport, maritime, and communications.

During Yıldırım's tenure as transport minister, Turkey has constructed high-speed rail lines between the capital Ankara and the central Anatolian cities of Eskişehir and Konya.