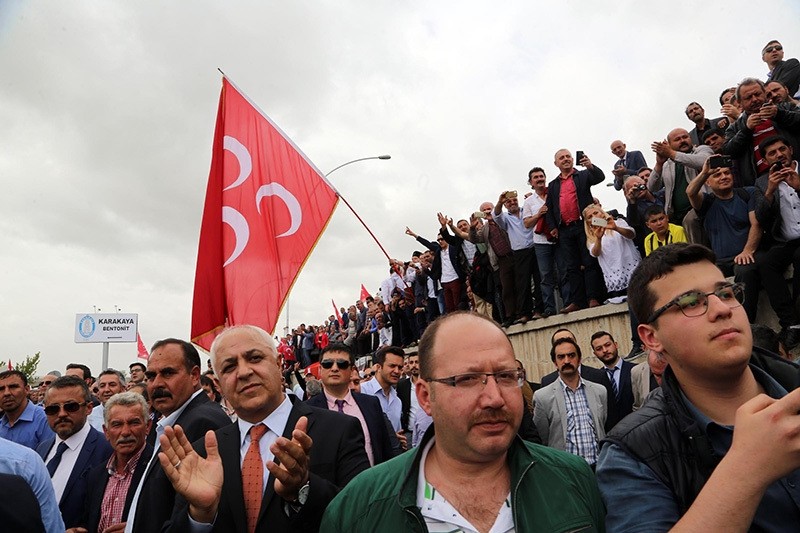 Supporters of dissidents in MHP await in front of police barricade during the emergency convention attempt in Ankara on May 14. (DHA Photo)
by Daily Sabah May 20, 2016 12:00 am

Turkey's Court of Appeals ruled Friday that the Constitutional Court is to decide whether the Nationalist Movement Party (MHP) to hold and emergency convention as dissidents requested.

The decision came upon a MHP delegate's application requesting that the country's top court to decide on issue that has became a judicial riddle.

However, MHP Deputy Chair Yalçın denied that the Court of Appeals took such a decision todefer the issue to the Constitutional Court, stating that the judicial process was still underway.

MHP dissidents have been very local after the Nov. 1 elections, in which the party barely passed the 10 percent national election threshold and lost half of its deputies compared to the June 7 elections. Since then, Meral Akşener, Sinan Oğan and Koray Aydın have raised their voices against Bahçeli, who has ruled the party since 1997. Later, the dissidents were joined by vice chairman Ümit Özdağ.

The party administration also appealed to emergency convention decision at Turkey's Court of Appeals, which will announce its decision within this month.

A Turkish court accepted on dissidents' appeal against the stay of execution of another court on party's emergency convention. Meanwhile, the court which previously overruled the emergency convention upon party administration's request issued the same day a new stay of execution decision, increasing uncertainty on whether the convention will be held and whether it will be legally valid.

Defying the court order and governorate's decision, opposition candidates and their supporters gathered in capital Ankara on May 15. Police have prevented dissident members of the MHP from entering the Büyük Anadolu Hotel, the designated location for an emergency convention. The entrance of the hotel was closed off by police barricades in line with instructions from the Ankara Governorate.

Hundreds of party members, who were not allowed to enter the hotel, stood in front of a training center belonging to Ministry of Customs and Trade and chanted slogans against the MHP's head office.