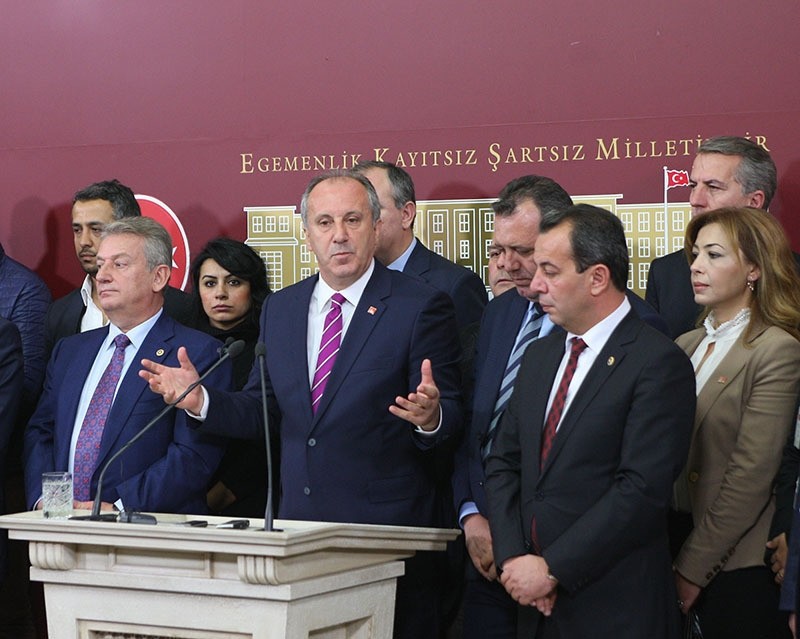 Dissidents in Turkey's main opposition Republican People's Party (CHP), led by the Yalova Deputy Muharrem İnce, who previously in 2014 ran for the party chairmanship in an emergency convention and lost to the current Chairman Kemal Kılıçdaroğlu, have reportedly once again started to raise their voice against the party administration.

The dissidents have been particularly more vocal following the approval of the bill to remove some deputies' immunities on Friday.

The CHP previously declared that it would vote in favor of the bill, but the first round of the voting on Thursday saw many CHP deputies defying their party and voting against it.

In the second round of voting on Friday, however, the outcome revealed that around 20 deputies had changed their strategy after drawing reaction, thereby contributing to the rise in 'yes' votes.

A lack of a definite strategy in the CHP regarding the bill and deputies' inability to stand in unity regarding their decisions pointed to many various problems in the party administration, which was pointed out by the dissident figure of Muharrem İnce, who is reportedly thinking of holding a public demonstration in Istanbul on June 4, according to various media outlets. İnce has also reportedly accused the CHP administration of not "acting courageously" regarding the lifting of the immunities bill.

İnce is a well-known intra-dissident figure, who has on many occasions slammed the chairman Kılıçdaroğlu's leadership skills. He previously pointed out that a leadership that has lost six elections cannot win for the seventh time, emphasizing the CHP's failure in the Nov. 1 elections.

CHP deputy's harsh criticism of the party administration again following Friday's voting results, as well as the party's policies, might be a signal that İnce is to soon declare his candidacy for the chairmanship.

The CHP is not the only party that dissident voices have been quite vocal in the last few months. Opponents within the Nationalist Movement Party (MHP) have been for months demanding that an emergency convention be gathered in order to vote on proposed changes to the party constitution. However, since the party constitution does not allow leadership elections at any congress other than the routine ordinary congresses (the next due to take place in 2018), a 'constitutional congress' is required before a leadership vote to amend the constitution and allow an earlier vote to take place.