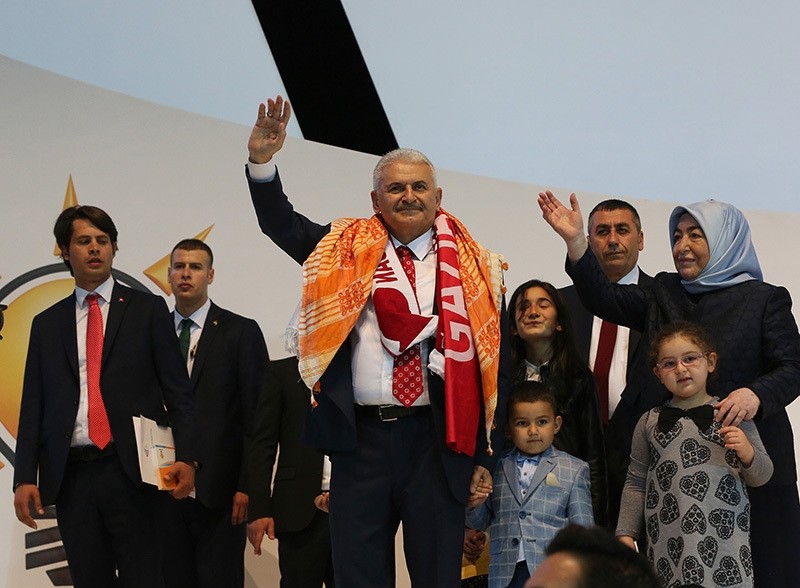 The ruling Justice and Development Party (AK Party) held an emergency convention on Sunday where Transport, Maritime Affairs and Communications Minister Binali Yıldırım was elected as the new chairman after receiving support from 1,405 party delegates. The AK Party already announced on Thursday that Yıldırım would be the sole candidate for chairman at its emergency convention, which began Sunday at 10:00 a.m. at the Ankara Arena Sports Complex. Along with the new party chairman who will become prime minister, other managing bodies such as the Central Decision and Executive Board (MKYK) were elected in two separate voting rounds.

The emergency convention that took place with the slogan, "Continuing on the Sacred March," drew great interest and support from AK Party deputies and attendees from all corners of the country. There were also a large number of foreign attendees, including diplomats, ambassadors and nongovernmental organization representatives from the U.S. in the full house. Along with representatives from local and international think tanks, Turkey's political party officials were among the attendees as well. Starting with opening remarks, Justice Minister Bekir Bozdağ began by stressing the significance of the convention and said that "it is an exemplary congress for all." Bozdağ said: "The AK Party has only one leader and that is our president, Recep Tayyip Erdoğan." He praised outgoing chairman and prime minister, Ahmet Davutoğlu's work and effort throughout his term.

Davutoğlu offered his resignation to Erdoğan at 06:00 p.m. (1500GMT). Yıldırım went to the Presidential Complex after the convention at 07:00 p.m. and was authorized to form the new cabinet.

Before Yıldırım's speech, Davutoğlu gave a speech, who said that it was not a farewell, but rather a loyalty convention. Saying that positions are irrelevant, Davutoğlu continued: "We must never forget our cause." Touching on the new constitution, Davutoğlu said he hopes it will be finalized soon. He also reiterated Turkey's determination in fighting terrorism. He stressed the significance of party unity and togetherness. "The sole reason behind my decision to step down from the position [Prime Ministry] is the value I place on the unity of our party and my concern to protect the AK Party from any harm," he said.

In his address, Yıldırım touched on four main topics, including Turkey-EU relations, ongoing terrorism threats, a new constitution and the presidential system. As visa liberalization discussions continue between Turkey and the EU, Yıldırım said that the EU needs to end "confusion" about its migration policies and added that Turkey would continue regulations to improve human rights and democracy whether or not its EU membership is realized. He also stressed Turkey's ongoing struggle against terrorism and vowed to continue the fight against DAESH the PKK and the Syrian Kurdish Democratic Union Party (PYD) at home and beyond its borders in Syria. He also said that the change in government leadership will not alter Turkey's combat against terrorist groups: "Our counterterrorism operations will continue without interruption until the bloody-handed PKK terrorist organization ends its armed activities. We will clear Turkey's agenda of this terror plague."

Although Yıldırım struggled addressing the crowd, losing his voice throughout his speech, he continued to speak about establishing a new constitution and finally introducing a presidential system. He reiterated his devotion and loyalty to President Recep Tayyip Erdoğan and said: "Turkey needs a new constitution. Nothing will be the same with the president being elected by the nation, because our president received the votes of millions of citizens and bares political responsibility for them." Emphasizing that his duty is to give the de facto presidential status a legal basis, Yıldırım said: "The confusion in the Constitution must end and this is possible only through a new constitution and the introduction of a presidential system."

With Yıldırım, who is one of the original members of the AK Party and maritime affairs and communications minister for five terms during previous AK Party governments, becoming its new chairman, the makeup of the MKYK has also changed.

The new list of AK Party's Central Decision and Executive Board (MKYK) is as follows (members current cabinet are written in bold):

The new list, which brought 26 new names to the MKYK, was accepted with 1,343 delegates' votes. The number of women in the MKYK increased from seven to 15.

The new MKYK list left out some important figures that have served within AK Party since its foundation.

Some 50,000 party members were present at the convention. More than 6,000 invitations for the convention were sent to foreign ambassadors, chiefs of diplomatic missions and NGO's, excluding Egypt, Israel, Bangladesh, Syria and Russia.

*Merve Aydoğan from Ankara contributed to this report