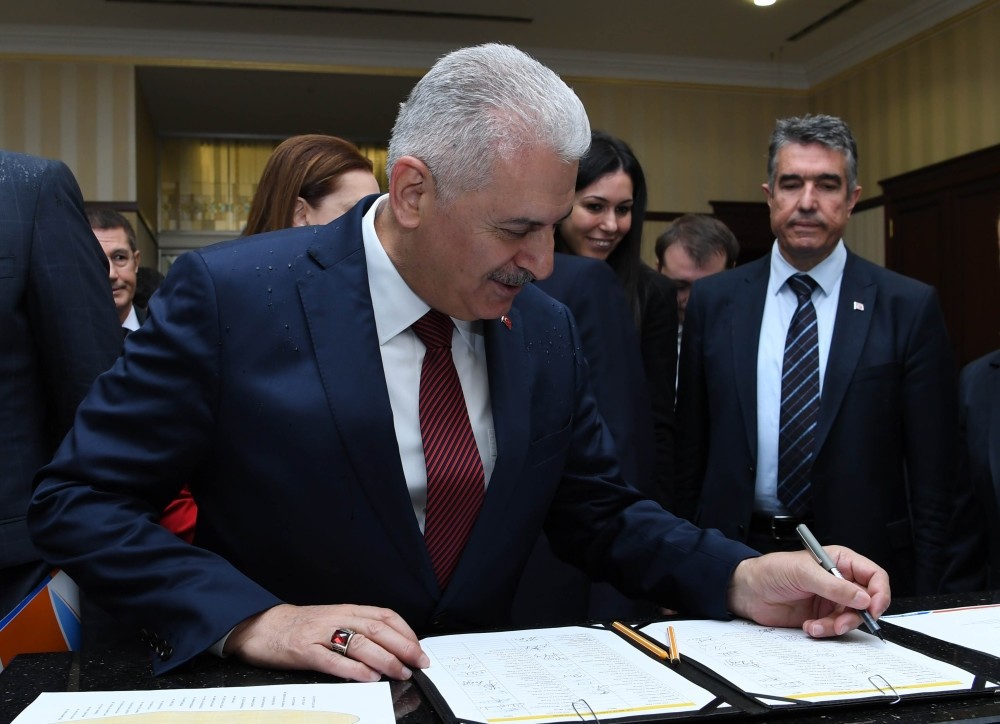 A day after being elected as the new chairman of the ruling AK Party, Binali Yıldırım chaired the first Central Decision and Executive Board meeting on Monday. Yıldırım told reporters the new Cabinet list would be prepared quickly and presented to President Erdoğan

On Monday, a day after being elected the new chairman of the ruling Justice and Development Party (AK Party), Binali Yıldırım presided over the first Central Decision and Executive Board (MKYK) meeting in Ankara. Speaking to the press ahead of the meeting, Yıldırım said he is working quickly to form the new Cabinet that will then be forwarded to President Recep Tayyip Erdoğan for approval. The AK Party held an emergency convention on Sunday where Transport, Maritime Affairs and Communications Minister Yıldırım was elected as the new chairman after receiving support from 1,405 party delegates. Erdoğan gave Yıldırım the mandate to form a new government as prime minister following the resignation of Ahmet Davutoğlu, the presidency said.

Erdoğan handed Yıldırım the mandate in a meeting at the Presidential Palace hours after Davutoğlu tendered his resignation.

The emergency convention that took place with the slogan, "Continuing on the Sacred March," and it drew interest and support from AK Party deputies and attendees from around the country. The full house also had a large number of foreign attendees, including diplomats, ambassadors and nongovernmental organization representatives from the U.S. Along with representatives from local and international think tanks, Turkey's political party officials were among the attendees as well. Starting with opening remarks, Justice Minister Bekir Bozdağ began by stressing the significance of the convention and said that "it is an exemplary convention for all." Bozdağ said: "The AK Party has only one leader and that is our president, Recep Tayyip Erdoğan." He praised Davutoğlu's work and effort throughout his term.

In his address, Yıldırım touched on four main topics, including Turkey-EU relations, ongoing terrorism threats, a new constitution and the presidential system. As visa liberalization discussions continue between Turkey and the EU, Yıldırım said that the EU needs to end "confusion" about its migration policies and added that Turkey would continue regulations to improve human rights and democracy whether or not its EU membership is realized. He also stressed Turkey's ongoing struggle against terrorism and vowed to continue the fight against DAESH, the PKK and the Syrian Kurdish Democratic Union Party (PYD) at home and beyond its borders in Syria. He also said that the change in government leadership will not alter Turkey's combat against terrorist groups: "Our counter-terrorism operations will continue without interruption until the bloody-handed PKK terrorist organization ends its armed activities. We will clear Turkey's agenda of this terror plague."

According to the survey results as given by ORC head Murat Pösteki, the AK Party leads support with 53 percent, followed by the main opposition Republican People's Party (CHP) with 24 percent, the Nationalist Movement Party (MHP) with 13 percent and the pro-Kurdish Peoples' Democratic Party (HDP) with 7 percent, falling below the 10 percent threshold in national elections to secure seats in Parliament.

Considering the possibility of an early election, Pösteki said that the HDP would not be able to get into Parliament while MHP's state depends on its attitude toward the new government's political agenda. He said the AK Party would not receive less support than 53 percent and that the party could receive more votes.

Pösteki said the survey indicated increased support for a presidential system has increased: "If the citizens want the governing system to change, then they might change it by allowing the AK Party to get 400 deputies in Parliament in a possible [early] election without introducing a referendum."

The survey also asked questions about the participants' expectations from Yıldırım as prime minister. Pösteki said that the most common expectations include the urgency of a new constitution, a presidential system, eliminating terrorism and the maintenance of armed struggle against terrorist organizations, cutting financial sources from and detention of those who help terrorist organizations, a more determined and strict fight with the Gülenist Terror Organization (FETÖ) and responding to all kinds of economic and diplomatic factors that threaten Turkey's borders.
Last Update: May 24, 2016 1:03 am
RELATED TOPICS