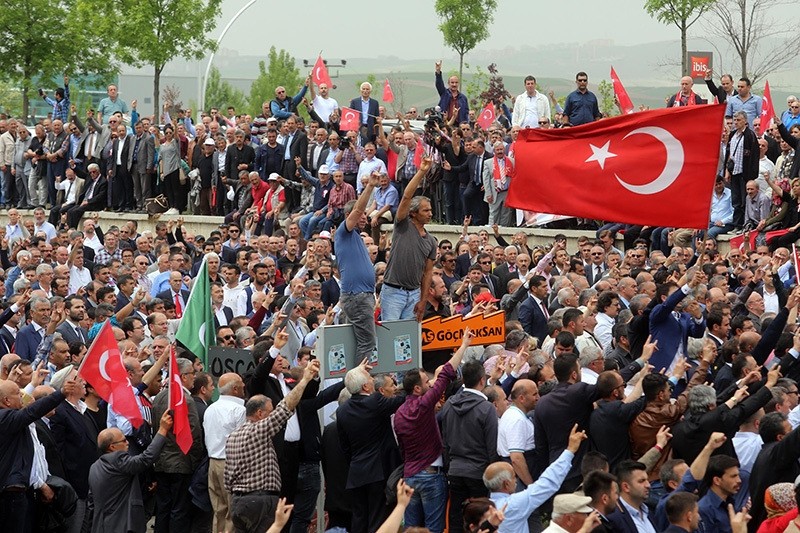 Supporters of dissidents in MHP await in front of police barricade during the emergency convention attempt in Ankara on May 14. (DHA Photo)
by Daily Sabah with AA May 24, 2016 12:00 am

In a written statement, Bahçeli said: "Our party will hold an emergency grand convention before our nation and history."

On Tuesday, just weeks after dissident members of the opposition MHP were blocked from holding an extraordinary congress, Turkey's Court of Appeals ("Yargıtay" in Turkish) confirmed their bid to convene a congress that might lead to new party leadership.

The Court of Appeals upheld an Ankara civil court decision green-lighting the congress, reversing a court that had overruled the decision on May 13.

MHP Deputy Chairman Semih Yalçın had said right after the announcement of the top court's decision that the party respected the decision, adding that the extraordinary congress would be either held on June 26 or July 10. Yalçın further said the current leader Devlet Bahçeli will also run for the party's chairmanship during the convention.

MHP dissidents have been very local after the Nov. 1 elections, in which the party barely passed the 10 percent national election threshold and lost half of its deputies compared to the June 7 elections.

Since then, Meral Akşener, Sinan Oğan and Koray Aydın have raised their voices against Bahçeli, who has ruled the party since 1997. Later, the dissidents were joined by vice chairman Ümit Özdağ.

Seeking an emergency convention to amend party regulations which do not allow emergency leadership conventions to be held, the trio collected 543 signatures out of MHP's total 1,242 delegates. This number is enough to call for a convention and very close to the required 601 votes to change the regulations.