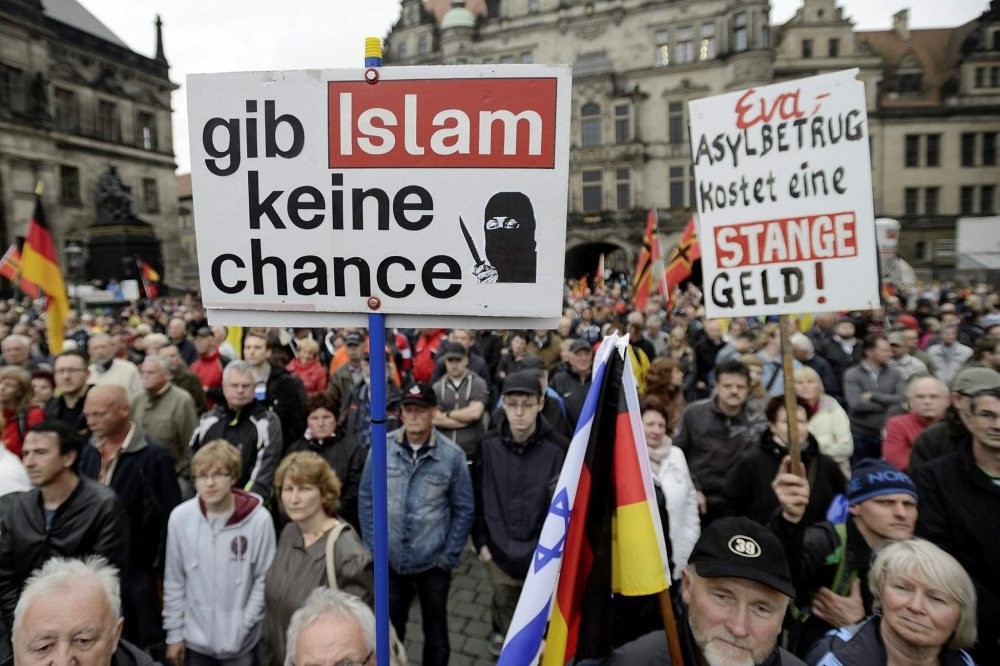 A demonstrator holds a sign that says: ,Give no chance to Islam, at a rally organized by pegida before elections in Dresden on June 7.
by Daily Sabah May 26, 2016 12:00 am

While Europe, and Germany especially, fails to cope with rising xenophobia in the wake of the migrant crisis, four more migrants were brutally attacked in the German state of Brandenburg

Four migrants were attacked by unidentified men late on Monday in Germany, in the province of Frankfurt an der Oder in Brandenburg state.

According to the police report, the men started by insulting the migrants, and then one man punched the face of the youngest of them, a 17-year-old refugee from Syria.

The asylum-seekers fled, with two of them making for a nearby shopping center. But they were chased down by the three men, who caught them and started beating them.

As the men continued to insult and abuse them, other members of the public joined in, hurling racist abuse. The victims didn't suffer any visible injuries and there was no need to call an ambulance, said a police spokesperson.

Police were able to arrest one man with the help of witnesses. They measured 3.7 parts per thousand of alcohol in his blood - or seven times over the legal limit for driving a car.

Germany has been struggling to cope with the rise of xenophobia and hate towards migrants.

With the migrant influx sharply down in recent months, the right-wing and populist Alternative für Deutschland party (AfD) has aligned itself with the xenophobic and anti-Islamic Patriotic Europeans against the Islamization of the Occident (PEGIDA) street movement. "Islam is not part of Germany," ran a headline in the AfD policy paper, a policy that some 2,400 members voted for at a party congress in the western city of Stuttgart.

The paper demanded bans on minarets on mosques, the call to prayer, full-face veils for women and headscarves in schools. A proposal for a more nuanced formulation – to "stop Islamism but seek dialogue with Islam" – was rejected with boos from the mostly male gathering, which was held in a hall decorated with banners that read "Courage. Truth. Germany." One speaker said "Islam is in itself political," while another linked Muslims with "Sharia, suicide bombings and forced marriages."

Germany has witnessed anti-immigrant and Islamophobic demonstrations following the record influx of refugees. Several refugee centers were hit by violent protests and arson attacks. In the face of widespread hatred toward Muslims in German society, German authorities, including Chancellor Merkel and President Joachim Gauck, have condemned xenophobic attacks.

Attacks against refugees and asylum centers in Germany have increased sharply over the past year. Officials say there were around 202 such attacks in the first six months of 2015, as many as during the whole previous year.

Europe has been witnessing a shift towards right-wing parties, which have been gaining popularity due to fears of a refugee influx. Recently, polls noted a rise in support for right-wing parties in Austria, Poland, France and Switzerland.
RELATED TOPICS