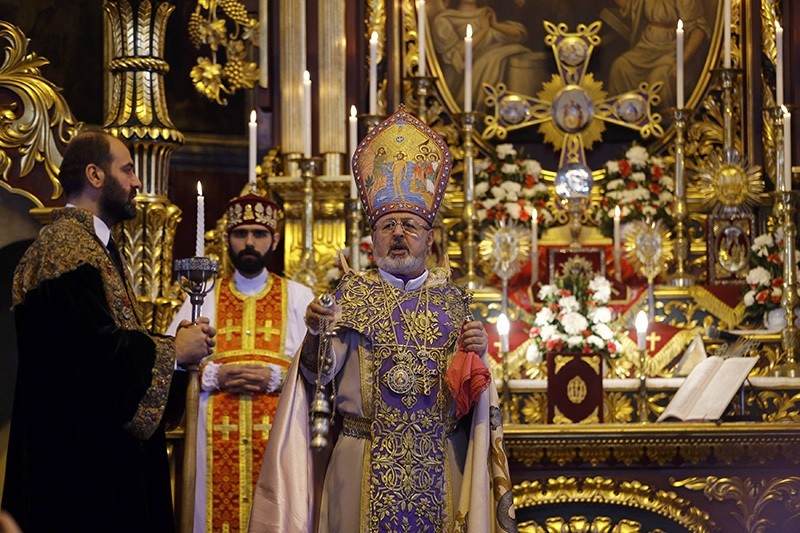 Archbishop Aram Ateu015fyan (C) holds a mass at Surp Asdvadzadzin Patriarchal Church in Istanbul April 24, 2015 (Reuters)
by Hasan Ay Jun 08, 2016 12:00 am
Acting patriarch of Turkey's Armenian Orthodox Church, Archbishop Aram Ateşyan sent a letter to President Recep Tayyip Erdoğan Tuesday regarding the recent adoption in the German Bundestag of a resolution recognizing the 1915 events of mass deaths of Armenians as genocide, expressing his sorrow for Armenian suffering being used with the decision.

He said that the Armenian community shares the deep sorrow that has emerged with the decision. Ateşyan wrote in the letter that Armenians' suffering in history is unfortunately used in international political platforms as an instrument to blame and punish Turkey and the Turkish nation.He also said in the letter that glossing over the German Empire's negative role in the tragic events with a couple of words, but still blaming the Ottomans, is controversial and does not fully represent public opinion in Germany.

"Turks and Armenians have to share the same region. These two old and neighboring peoples should not be detracted from each other with hate and the rhetoric of hostility, and peace and friendship should be provided rather than politicizing history," he said.

On April 24 this year, Erdoğan had released a message commemorating the Armenians who died in 1915 and offering his condolences to the relatives of those killed during the bitter period of history. Ateşyan read the letter at the April 24 commemoration ceremony.
Last Update: Jun 08, 2016 10:34 am
RELATED TOPICS