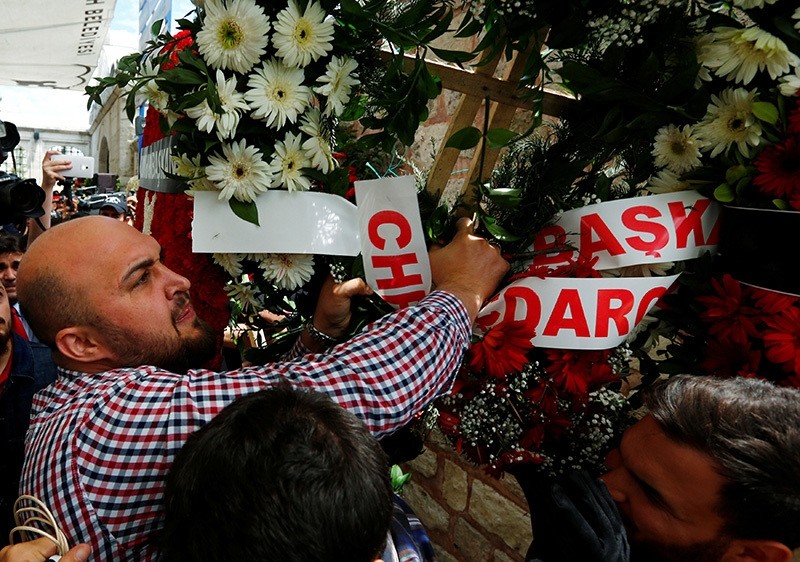 Prior to the funeral prayer held at Fatih Mosque in Istanbul, several protesters took off the paper on a wreath bearing Kılıçdaroğlu's name, while moments later the wreath was taken out of the mosque courtyard.

"You are a killer!" mourners shouted at Kılıçdaroğlu, as heard on a live TV broadcast.

As tensions rose, Istanbul Police Department head Mustafa Çalışkan intervened in the group and warned that fights should not occur at a funeral.

Following the prayer, several others protested Kılıçdaroğlu and other CHP deputies while leaving the mosque courtyard. One person who threw a spent bullet at Kılıçdaroğlu was taken into custody.

Kılıçdaroğlu held a press conference following the protests, in which he blamed five to six people trying to provoke the crowd attending the funeral. Stating that the protest with a bullet implied a death threat, the CHP leader said that he cannot be dissuaded from attending funeral services of fallen security officers.

Kılıçdaroğlu added that from now on the party will take its own precautions to prevent such incidents.

The protest came a day after Kılıçdaroğlu said on a live TV interview on Tuesday that he visited PKK and Revolutionary People's Liberation Party Front (DHKP-C) terrorists in prison. "We visited sick PKK and DHKP-C members in prison. We made no exception," he said Tuesday evening. Although Kılıçdaroğlu admitted he and his party members visited imprisoned terrorists, he had said earlier that that the CHP cannot be mentioned alongside the PKK.

During a hospital visit in February, Kılıçdaroğlu had said: "Whoever supports the PKK, we regard them as a component of the PKK." On Tuesday he said: "We visited wounded PKK and DHKP-C convicts without exception." Considering Kılıçdaroğlu's statements, some complain the he regularly shifts his stance regarding terrorist groups. At a CHP group meeting in April, Kılıçdaroğlu had said: "Anyone who establishes a correlation between terrorist groups and the CHP is vile and dishonest."