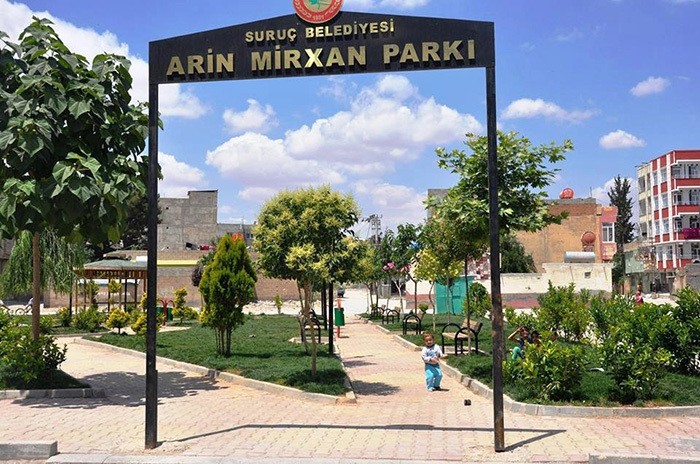 Security forces removed the sign of a park bearing the name of a terrorist from the PKK's Syrian-affiliate People's Protection Units (YPG) in the Suruç district of southeastern Şanlıurfa province yesterday amid complaints from local residents.

The park, which was opened by the municipality in a district ruled by the Democratic Regions' Party (DBP), the regional-affiliate of the pro-PKK Democratic Union Party (HDP), was named Arin Mirkan Park, referring to the terrorist whose actual name is Dilar Gencxemis, who committed a suicide bombing attack on DAESH headquarters in Kobani during clashes between the two terrorist organizations in October 2014.

The incident garnered harsh reactions from locals who demanded that the sign be removed from the park. Both the Şanlıurfa governorate and the Suruç district governorship have taken legal action against those involved.

In a written statement, the Şanlıurfa governorate said the sign was removed by security forces and an investigation is underway of alderman in Suruç. Furthermore, the district governorship said in a statement that the decision to name the newly opened park after the man was made without permission from local authorities.

Earlier in February, the Interior Ministry dismissed Suruç Mayor Orhan Şansal on charges of being a member of the PKK terrorist organization. Şansal has been on the run for four months, and a warrant was issued for his arrest.
Last Update: Jun 10, 2016 3:34 pm
RELATED TOPICS