Experts: Crack in opposition will lead to new party in Turkish Parliament 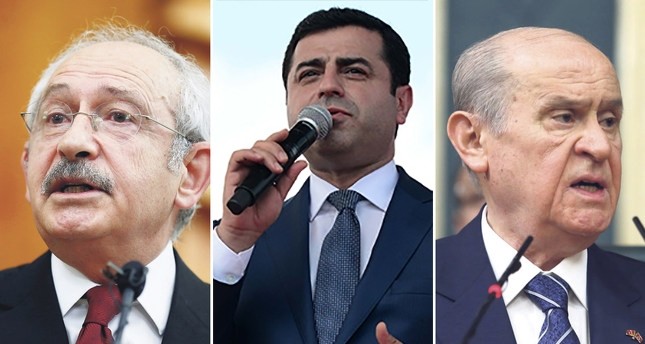 Opposition parties in Parliament are caught up in intra-party conflicts and an unstoppable desire for emergency conventions. As the Nationalist Movement Party (MHP) is set to hold one this Sunday, uprisings within the Republican People's Party (CHP) and pro-PKK Peoples' Democratic Party (HDP) are gradually coming to the surface. "A fifth party will emerge from one of the opposition parties in Parliament, but it is not for sure from which one it will be for the time being," Adil Gür, the president of the A&G research company, which was the most successful polling company in the Nov. 1 elections, told Daily Sabah. The HDP has already fallen way below the 10 percent election threshold according to various polls.

Diyarbakır deputy Altan Tan has recently stood out against his own party, claiming that Kurdish politics may divide the party, resulting in a new party.Ruling out the possibility of a fifth party emerging from within the HDP in the short term, İlhami Işık, a columnist for Star daily and specializing in Kurdish affairs and the PKK, told Daily Sabah that a new party in Kurdish politics is on the way.

"If this war strategy and the heavily leftist, socialist and secular discourse continues, then different formations could emerge," Tan said last week, blaming the HDP for lending support to the PKK's urban war tactics.

"The terrorism issue damaged the HDP heavily. So long as locals are forced to leave their houses and the strategy of digging ditches continues, the HDP will further lose support," Gür asserted. "The HDP is at a crossroads. There is a sociological division among the Kurds," he added.

Stressing that the HDP is now being questioned by its voters, Işık said: "The HDP is blamed because people put the party in a position to rule the country in the June 7 elections, expecting it to solve their problems."

Işık added that the HDP could not use the chance to sweep out violence from the country. "This is why there is a crack within the party and distrust among the public," he claimed.

The nationalist MHP has been suffering strong intra-party opposition since December. Dissidents have been in efforts to gather an emergency convention since then, putting chairman Devlet Bahçeli in a tough position.

Even though Bahçeli asserts that he will remain the chairman of the party, much is expected from Meral Akşener and Sinan Ogan, two of the strongest dissidents.

"A possible chairpersonship for Meral Akşener will bring the MHP many votes from the AK Party. This idea is wrong," Gür contended, adding that such a change would mostly steal votes from the CHP.

Gür also claimed that dissidents will not prevail and Bahçeli will keep his post.

While it is highly likely that a fifth party will emerge from within the HDP, the republican CHP is in turmoil as well. The intra-party opposition gathered and held a closed-door meeting in early June. The meeting included some former CHP deputies and delegates.

The current position of the CHP administration was addressed, the attendees at the meeting stressed the "need for a new party chairman and administration is vital."

CHP Chairman Kemal Kılıçdaroğlu had challenged the dissidents in mid-May, saying that he is ready to hold the convention if the opposition gathers the required signatures from party delegates.

Kılıçdaroğlu has been facing protests and heavy criticism from many circles due to his controversial remarks. He took flak for his remark that a presidential system cannot come to Turkey without bloodshed.

He also faced tough protests at the funerals of slain police officers. The protests are believed to have taken place because he said in a live TV interview early June that he visited PKK and Revolutionary People's Liberation Party-Front (DHKP-C) terrorists in prison.
RELATED TOPICS