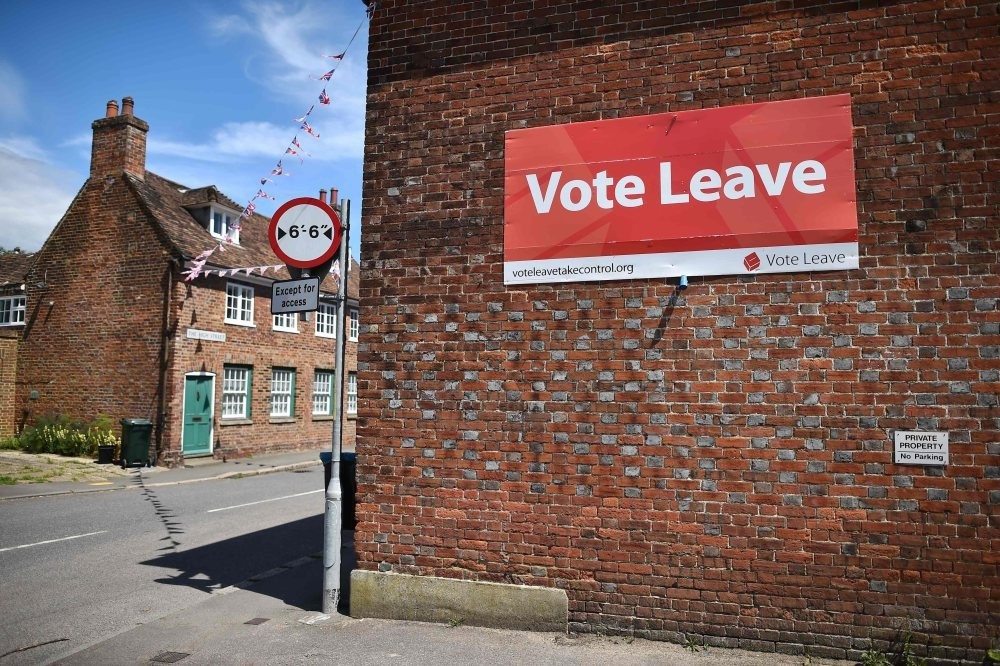 Experts said that using Turkey's EU membership process as a tool in the Brexit campaign is a scare tactic and that if the U.K. leave the EU it will have consequences indirectly affecting perception of Turkey in the country

Today the referendum for Britain to either leave or remain in the EU finally comes down to the vote, and public surveys show that the two camps are neck and neck. Turkey has been a topic of discussion in the lead-up to the vote. Brexit supporters have argued that Britain would be exposed to increased immigration and security risks from Turkey if it were to join the EU. They say that the U.K. needs to leave the EU, using Turkey's possible EU membership as a reason. Addressing these fears, British Prime Minister David Cameron dismissed the idea that Turkey would join the bloc any time soon, recently joking that its current progress toward accession meant it would not become a member until the year 3000. Foreign Minister Mevlüt Çavuşoğlu said that Turkey wants Britain to stay in the EU "under any circumstance." He said it was not right that Turkey's status as an EU candidate country was used as an argument in the Brexit campaign, adding: "Turkey has never been a burden on the EU." Çavuşoğlu said Cameron has contradicted himself, as he was the one to set the referendum and is now standing against it.

"The increasing mention of Turkey throughout the referendum process in Britain reflects the point Turkey has reached," Çavuşoğlu said, adding that it can positively be seen as a "strong Turkey," or as a negative sign of "the increase in Islamophobia and anti-Turkey campaigns in Europe."Speaking to Daily Sabah about Turkey's place in the Brexit campaign, Ian Lesser, the senior director for Foreign Policy at the German Marshall Fund of the United States (GMF), said that the use of Turkey "has been a very unfortunate element in the 'out' campaign," and that the negative public opinion is likely to continue affecting attitudes about Turkey, regardless of the referendum's result.

The director of the European think tank Bruegel, Guntram Wolff, however, said the use of Turkey's membership had no substantive relation with the referendum, adding: "Turkey's EU membership is currently not realistic." Professor Richard G. Whitman from Chatham House said he is surprised that "Turkey is playing so much of a prominent role in the discussion."

Drawing attention to the switch in the U.K.'s attitude on Turkey, the director of the Global Political Trends Center (GPoT), Professor Dr. Mensur Akgün said all the discussions are based on generalizations and prejudices against Turkey: "Britain has always acted as if it stands by Turkey whenever relations with the U.K. come into question. For the first time in history we saw how Britain is against Turkey's EU membership."

Citing the same change in Britain's stance on Turkey, European studies researcher from the Foundation for Political, Economic and Social Research (SETA), Enes Bayraklı, said it shows that "the deep historical issues are now brought forward, and they are being used as a tool." Bayraklı said that there is a manifest campaign against Turkey in the U.K.: "The main reason behind Turkey being prevented from entering the EU is not the immigration issue or the economic issues, but only political and religious ones."

As for how the Brexit would affect Turkey, Lesser said there would be indirect but substantial consequences: "Turkey would lose a traditionally important advocate for strategic partnership with Ankara. The negative geopolitical implications of a Brexit – and there are many – would be keenly felt in Turkey's neighborhood in the form of a less capable and active EU, especially in terms of crisis management."

Wollf said: "It is unlikely to have an immediate and direct effect on Turkey. … Brexit would confirm an increasingly hostile atmosphere towards foreigners in the U.K. and in other parts of the EU." Whitman said the possible effects all depend on the result of the referendum, saying: "I think, in the end, the U.K. will vote to remain."

"Britain used to support Turkey's EU membership as a tradition, as a counterforce against Germany and France in the U.N. By the Brexit, this equilibrant will break down, the EU will be announced more as Continental Europe," Bayraklı said. Akgün focused on the economic consequences of the Brexit for Turkey, as Turkey will no longer be exporting goods to the U.K. as an EU member, adding that the economy will also be affected in terms of the rate of fluctuation of both the pound and euro.

Lawmakers in UK's Turkish districts speak out on Brexit

British lawmakers representing Enfield – the London district with the highest number of Turkish-speakers in the U.K. – have expressed concerns about the level of anti-Turkish rhetoric in the country's EU referendum campaign.

Joan Ryan, who is the opposition Labor Party parliamentarian for Enfield North and wants Britain to stay in the European Union, said she believed the tone of the referendum campaign had caused tensions among communities.

And pro-Brexit, ruling Conservative Party parliamentarian David Burrowes, who represents the adjacent Enfield Southgate district, said there was an issue concerning anti-Turkish sentiment that needed to be countered. The north London borough of Enfield is home to the largest number of Turkish-speaking people in the U.K. Nearly 20,000 residents named it as their main language in a 2011 population census, and thousands more are British citizens originating from Turkish, Kurdish and Turkish Cypriot families.

Ryan and Burrowes, on opposite sides of Britain's European Union debate, are hoping to persuade voters across their boroughs to support them in Thursday's referendum. Ryan told Anadolu Agency, "I would say my view is that the majority of that tone and that content that I think is divisive and unhelpful in the extreme, I don't think that's, in the main, coming from the Remain camp."

Brexit supporters, in particular, have used Turkey prominently in their electioneering ahead of the June 23 referendum, highlighting potential Turkish membership in the 28-nation bloc as a reason why Britain should leave.

Former Mayor of London Boris Johnson and Michael Gove, the justice secretary, wrote an open letter to Prime Minister David Cameron last week urging him to immediately block Turkey's EU membership. But Cameron responded by saying Turkish membership is not "remotely on the cards" and has said the country's accession talks could last until the "year 3000."

David Burrowes, the Conservative lawmaker campaigning for Britain to leave the EU, said he did not see Turkey as "the main focus" of the debate on Britain's future in Europe. He said: "I agree that it's not something I would particularly focus on in terms of my reasons for leaving membership of the European Union. I think [on] both sides, frankly, there's been a concern about the way Turkey's been misused.

"I mean, the prime minister, I know, and minsters have talked very positively [previously] about how much they support the accession of Turkey to the European Union; they've talked very positively about that. And they've kind of rowed back from that." Burrowes said there were many Turkish-speaking business leaders who were going to vote to leave the EU on Thursday. "The Turkish-speaking councilors in my party are voting Leave. There's many others voting Leave – businessmen around here who themselves don't appreciate and don't understand why there is such freedom of movement for European Union citizens to be able to come here," he said.

Spokesman: EU's Juncker will not quit in case of Brexit

European Commission chief Jean-Claude Juncker will not step down if Britain votes to leave the EU in Thursday's referendum, his spokesman said.

"The answer is no," spokesman Margaritis Schinas said on Wednesday when asked if, in the light of media reports about Juncker's health, he would resign in the event of a "Brexit". He said Juncker had not played a more vocal role in the campaign because the Commission "was not and is not part of the campaign taking place in the UK". "It is an issue for the British people."

The high stakes in Britain's referendum have led to speculation about the fate of a series of political figures, not least British Prime Minister David Cameron, if Britain leaves the 28-nation union. Former Luxembourg prime minister Juncker, 61, warned Britain on Tuesday that voting to leave the bloc would be "an act of self-harm". He insisted last week that the EU was not "in danger of death" if Britain departs, but that it would have to learn lessons.

In comments to Norwegian broadcaster NRK, the leader of the oil-rich Scandinavian country that has twice voted in referendums to stay out of the EU said a weaker Europe would mean the economic situation will be more difficult when reforms and competitiveness are needed.

"But it will also mean a more political and fragmented Europe, a weaker Europe and a weaker world," she said in the interview on Wednesday.

She said that in a world where "we are increasingly dependent on each other and solve issues together, it's dangerous to demolish joint institutions," adding that she is "deeply worried" should Britain opt out of the EU.

In Spain, where around 1 million of British ex-pats live full- or part-time and 16 million visit every year, concerns about Britain leaving the EU are widespread.

"This referendum has been a mistake, it's opened a Pandora's Box," Spain's acting Economy Minister Luis de Guindos said earlier this week in a roundtable discussion reported by Spanish daily Expansion.

He added: "It's populist in character, provoking tensions and divisions… [Brexit] would be horrible."

A recent survey by the Germany-based Bertelsmann Foundation showed Spain leads EU states opposed to Brexit with 64 per cent of Spaniards wanting the U.K. to stay and 78 per cent in favor of further EU integration.

Alongside Spain's commercial ties to the U.K. - trade between the countries amounted to around $36 billion last year - the issue of Gibraltar, a British territory located on Spain's southern tip, has long been a thorny issue between London and Madrid.

Gibraltar residents have the right to vote in Thursday's EU referendum and last week U.K. Prime Minister David Cameron flew to the enclave to remind Britons of the threat of leaving the EU.

A rally, which would have capped the first visit by a British premier since 1968, was cancelled following the killing of Labour lawmaker Jo Cox.

However, the trip ruffled feathers in Spain and was criticized by acting Prime Minister Mariano Rajoy. "What's being debated is whether the U.K. remains in the EU or will leave the EU and the campaign for that should be conducted in the U.K., not in Gibraltar," he told Spanish
radio.