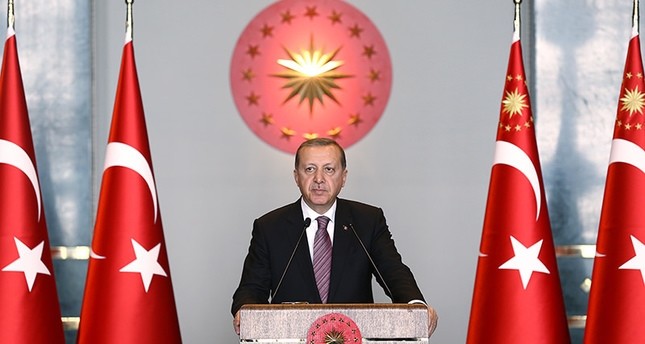 President Recep Tayyip Erdoğan underscored the importance of unity, peace and stability in his Ramazan Bayramı – or Eid al-Fitr – message released on Monday as he said that Turkey will continue to mend relations with its neighbors and will achieve its 2023 targets despite global economic crises and chaos. With regards to the recent steps taken towards fixing relations with Russia and Israel, Erdoğan said, ''Mutual positive steps taken in recent weeks promise hope for the future.''

The president started off his eid message by sending his "deepest" greetings to everyone following the holy month of Ramadan.

''Besides being a providential blessing, eid provides an opportunity for us to reinforce our national unity and to renew our brotherhood vow,'' Erdoğan said.

He continued by saying that the Islamic world is going through a difficult period, with Muslims in different regions including Afghanistan and Syria suffering ruthless attacks and terrorism, which has also cast a shadow over eid in Turkey as well. Erdoğan offered condolences to the Turkish security forces who lost their lives while fighting terrorists, and wished a speedy recovery for the wounded. Touching on global developments, Erdoğan said that the Syrian crisis continues despite nearly 600,000 innocent people losing their lives. He said that Turkey will continue to provide a safe haven for its Iraqi and Syrian brothers and sisters fleeing conflict, and will continue to contribute to efforts to resolve the crisis fairly.

He also added that Turkey is overcoming crises created by the Syrian crisis, terrorism and fabricated tensions, to fix broken relations and is removing obstacles one by one, while completing grand projects that will move Turkey forward to the future.

He continued by saying that Europe is also dealing with a number of issues, including economic instability and political uncertainty following the Brexit referendum.

''As Turkey, we have taken the necessary precautionary measures against global economic and political crises,'' the president said, and added that Turkey continues to take steps towards its 2023 centenary goals and will further strengthen itself.

He said that Turkey is not just a country of 780,000 square kilometers, but contains strong potential with its rooted heritage and rich civilizational values.

''We need to embrace one another, and stand in solidarity more than ever,'' the president said, urging everyone to see eid as an opportunity to strengthen ties with family, friends, relatives and the nation as a whole.

Erdoğan also touched upon the importance of obeying traffic rules as millions of Turkish people are on the road to visit family or for vacation, and said people should avoid speeding and, ''Let us not turn joy into pain.''

The president ended his message by saying that he hopes eid will bring peace, happiness and health to everyone, to Turkey, and to the Islamic world.

Speaking at an iftar dinner in Istanbul, Erdoğan said Turkey consulted the leaders of Palestine while negotiating with Israel. "Our main concern is the Gazans and we made our consultations with Khaled Meshal, Mahmoud Abbbas and Ismail Haniyeh while making the deal with Israel," the president said.

Erdoğan added that the criticism against Turkey's efforts to improve ties with Israel and Russia were not based on any kind of comprehensive policy or analysis.

The president underlined that Turkey is passing through a severe test in which "the country has become the target of the world's bloodiest terrorist organizations," saying it needs to be strong for the sake of not only Turkish people but also all civilians in the region.

The government has so far blamed DAESH for Tuesday's deadly attacks at Istanbul Atatürk International Airport, one of the busiest hubs in Europe. Turkey has cracked down on DAESH after a string of deadly attacks were blamed on the group.