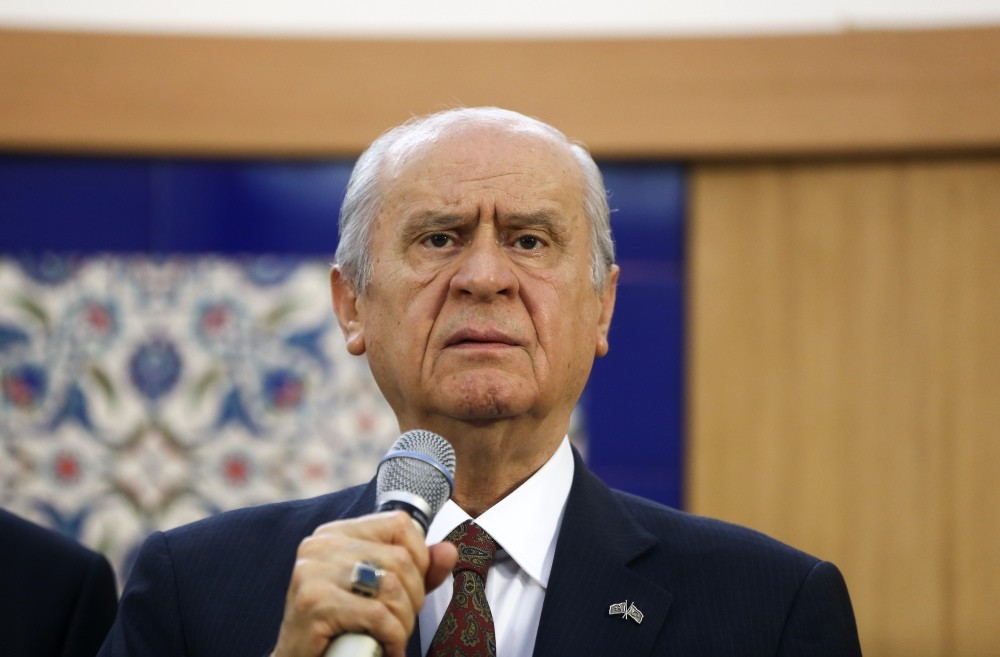 Amid uncertainty within the party due to legal cases and intra-party opposition, MHP Chairman Bahçeli accused the Gülen Movement of secretly supporting the turmoil through dissidents

In the ongoing saga of intra-party divisions in the opposition Nationalist Movement Party (MHP), party Chairman Devlet Bahçeli on Wednesday criticized MHP dissident Meral Akşener's alternative Ramadan Bayram – or Eid-al Fitr – party, further claiming that the U.S.-based fugitive imam, Fethullah Gülen, is behind those in the party opposed to his rule. Speaking at his party's event to celebrate Ramadan Bayram, Bahçeli said: "The only bayram celebration held by the MHP is here and today. According to the information I received, the other celebrations are only a recommendation from Fethullah Gülen's organization and a scam to get them into politics and society again. We will give this show away."

He said what is necessary will be done to MHP members involved with the alternative celebration, and added: "The requirements of our bylaws will be enforced for those members joining this celebration and a cleaning season within MHP will start now."

Prior to Bahçeli's Ramadan Bayram celebration, the alternative celebration was held by Akşener on the same day. Akşener is running for the chairmanship of the party in opposition to Bahçeli. During Akşener's speech, a group of Bahçeli supporters shouted, "The leader of our movement is Bahçeli," which resulted in a fight between supporters of the two factions. Many people were wounded and gunshots were also heard from the hotel where the celebration took place. The armed person was taken into custody.

MHP dissidents held an emergency convention on June 19, which was not sanctioned by the party administration, at which they changed party bylaws to allow for the election of a chairman at emergency conventions. The plan was to elect a new chairman at the July 10 convention. The dissidents have been fighting to remove Bahçeli, who has led the party for nearly 20 years, following the party's poor showing in last November's general elections as well as all previous ones under Bahçeli's leadership.

The party will now hold a convention with elections in March 2018.

As one of the strongest candidates for the canceled party chairman elections, Akşener is believed to be gathering signatures from deputies in order to pave the way for a new emergency convention. Akşener is also rumored to be making preparations for a fifth party to be of a center right ideology, and formed mostly by current MHP members. The new party's name is rumored be the Nationalist Democratic Party (MDP) or Nationalist Labor Party (MÇP), and would most probably include MHP deputies who will join the opposition. Akşener is also said to be forming a group by reaching out to at least 20 deputies in the party assembly, including transfers from the ruling Justice and Development Party (AK Party).

The twisted path to yesterday's convention began in February when a group of MHP dissidents, frustrated when the party rebuffed their call for an emergency convention, filed a case with the 12th Ankara Civil Court of Peace.

The court decided in April to appoint trustees to the party and hold a convention, as the dissidents had gathered 531 signatures out of 1,232 party delegates.

On May 24, the Supreme Court of Appeals upheld an Ankara civil court decision giving the green light for yesterday's congress.