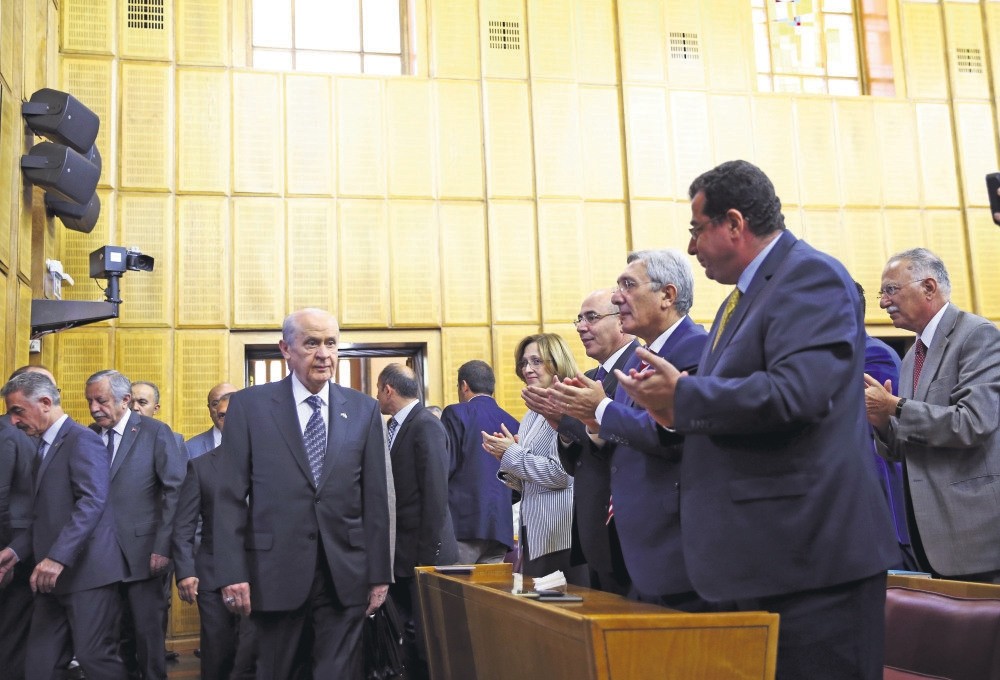 MHP dissidents decided to unite against Chairman Bahçeli and announced that they will join the convention to celebrate the party's foundation. In the same day, however, Bahçeli signaled the upcoming expulsion of dissidents from the party

Nationalist Movement Party (MHP) Chairman Devlet Bahçeli, speaking to his party's parliamentary deputies yesterday, said all party dissidents will be referred to the disciplinary committee and a clean-up of the party will start. Answering journalists' questions after the meeting, Bahçeli commented on the legal procedure to be followed in regard to the dissidents, saying: "We will patiently wait for the decision of the judiciary. They want this and we want this. ... During the last seven months, anyone who discredits the MHP, holds illicit meetings and introduces alternative bayram celebrations will be referred to the Central Disciplinary Committee and further action will be taken. The MHP will proceed on its way after a cleansing."

Following the Ankara 3rd Civil Court of Instance's motion stopping the emergency convention to be held on July 10, the party dissidents gathered on Monday, deciding to watch the judicial process closely.

The four candidates for the leadership of the party in the canceled election on July 10, Sinan Oğan, Meral Akşener, Koray Aydın and Ümit Özdağ, were also present at the meeting, where one of the main goals was to collect signatures from the deputies to hold a new convention and election. The dissidents claim that if they are able to collect the necessary signatures within two days a new emergency convention to hold an election might be held within one month.

Further announcing that all four members will be joining the Erciyes Victory Congress to be held to celebrate the founding of the MHP, the dissidents stated one of their main agendas for the congress will be collecting signatures for a new convention.

According to information given by the sources within the party, there will be expulsions from the party. After holding an alternative eid celebration to the official one held at the party head office, prominent MHP dissident Akşener drew negative attention from party headquarters. It is expected that on July 15, as the expulsion procedure is initiated for 20 party members, Akşener will be first.

Bahçeli previously said the party was waiting for the decision from the Supreme Election Board (YSK) in order to hold the convention on July 10. "If there are no judicial obstacles, then we will hold our convention at the Ankara Sports Arena in a festive way. However, if not allowed, then we will begin the process of holding the 12th ordinary convention of the party starting with conventions throughout provinces and districts on Oct. 9," he added.As Bahçeli said, October will be a crucial month for the MHP. The dissidents will not have a chance to topple Bahçeli should they fail to change the party bylaws again and elect a chairman until October. Otherwise, the legal period for the 2018 ordinary convention will begin.

MHP dissidents held an emergency convention on June 19, which was not sanctioned by the party administration, at which they changed party bylaws to allow for the election of a chairman at emergency conventions. The plan was to elect a new chairman at the July 10 convention. The dissidents have been fighting to remove Bahçeli, who has led the party for nearly 20 years, following the party's poor showing in last November's general elections as well as all previous ones under Bahçeli's leadership.As one of the strongest candidates for the canceled party chairman elections, Akşener is believed to be gathering signatures from deputies in order to pave the way for a new emergency convention. Akşener is also rumored to be making preparations for a fifth party to be of a center right ideology, and formed mostly by current MHP members. The new party's name is rumored be the Nationalist Democratic Party (MDP) or Nationalist Labor Party (MÇP), and would most probably include MHP deputies who will join the opposition. Akşener is also said to be forming a group by reaching out to at least 20 deputies in the party assembly, including transfers from the ruling Justice and Development Party (AK Party).
Last Update: Jul 13, 2016 2:27 pm
RELATED TOPICS