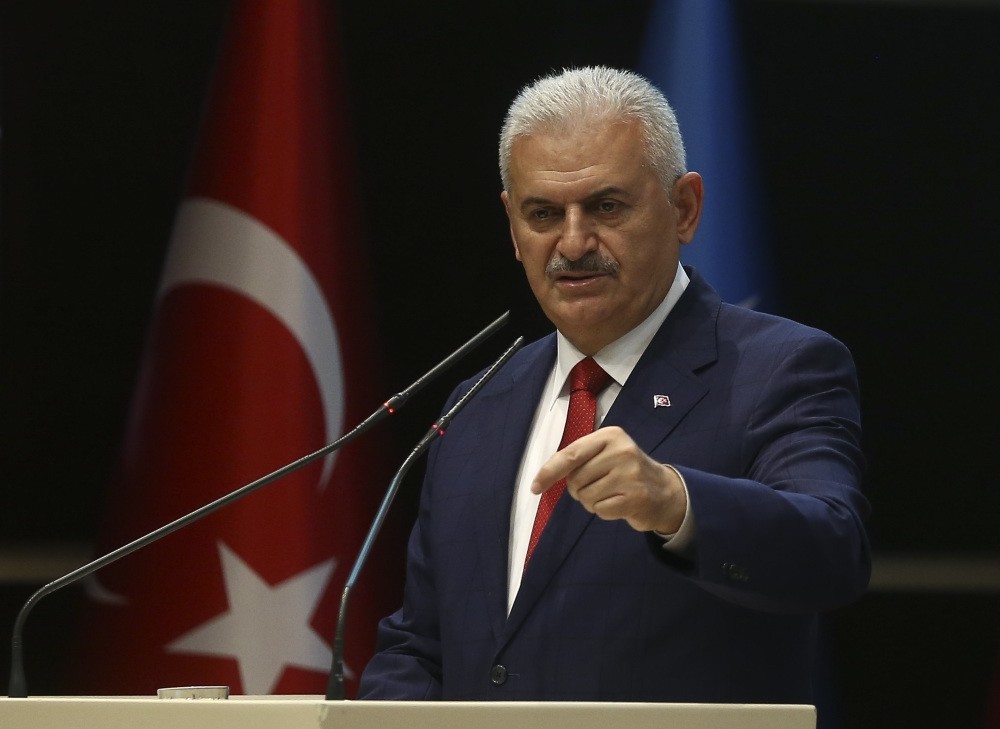 Commenting on the opposition's ‘shameful' criticisms of granting citizenship to Syrian refugees who meet certain criteria, PM Yıldırım said such a hateful attitude is ‘unacceptable' and against the principles of social democracy, Islam and Turkish history

Prime Minister Binali Yıldırım in a speech at the Justice and Development Party (AK Party) Provincial Chairmen's Convention on Wednesday said that discussions that aim to tarnish honors of Syrians in Turkey mainly motivated to oppose the idea for being proposed by President Recep Tayyip Erdoğan.

Touching on the recent issue of naturalizing Syrian refugees, Yıldırım said that applicants fulfilling the criteria might become Turkish citizens. "We are witnessing some rather embarrassing discussions about our Syrian brothers and sisters that are inconsistent with the principles of social democracy, of Islam and of being a Turkish citizen. Some people are showing and encouraging a hateful attitude toward Syrians, who only seek shelter, with the intention of opposing our president. This merciless behavior is unacceptable," Yıldırım said. It has been four years since the first wave of refugees came to Turkey and over time, and many were provided residence and temporary work permits. Some 100,000 Syrians were born in Turkey in four years, Yıldırım said, adding that it would be unjust and inhumane to deprive them of citizenship.

Yıldırım asserted that their aim is to nurture friendships with neighboring countries. ''We will expand the circle of friendship. We have already started doing it. We have normalized our ties with Israel and Russia. Now I'm sure we will normalize ties with Syria," he said, drawing attention to necessity of a Syria without Bashar Assad. "Hopefully, our relations with Syria will normalize over time. It is vital that we improve our relations with our neighbors. We went through the thick and thin. The future lies in brotherhood and unity."

"We need this [because] in order for counterterrorism efforts succeed, there has to be stability in Syria and Iraq and [they] need to adopt a system of government that represents all our brothers and sisters [in Syria and Iraq]. This is inevitable," he said.

Regarding Turkey's fight against the PKK, Yıldırım said that urban areas had been cleansed of militants and they would show the same determination in eradicating PKK elements from rural areas as well. Calling on the leaders of all parties, Yıldırım said: "This is a matter that involves every political movement and parties, not only the AK Party. The Republican People's Party [CHP], the Nationalist Movement Party [MHP] and the Peoples' Democratic Party [HDP] should also act against terror of all kinds." Yıldırım said that HDP deputies should stop attending funeral services of terrorists responsible for slaughtering innocent people if they want unity.

Finally, Yıldırım said: "We have altered the fate of Turkey by prioritizing justice and development, which are the AK Party's two main principles. However, there seems to be a tutelary spirit spreading among the public. While we cannot allow this kind of understanding to be nurtured, it is our duty to open our arms to diverse ideas of all 79 million Turkish citizens and embrace them. Remember, only in a dictatorships is there a uniform mindset."

Yıldırım also touched on establishing a unifying government in Syria. "We normalized our relations with Israel and Russia. I'm sure we will go back to normal relations with Syria as well. We need this [because] in order for counterterrorism efforts succeed, there has to be stability in Syria and Iraq and [they] need to adopt a system of government that represents all our brothers and sisters [in Syria and Iraq]. This is inevitable," he said.

Speaking to Daily Sabah, officials underscored that there will be no changes to Turkey's relations with Syria unless the Assad regime changes.

Officials noted that Turkey is currently undergoing an expansion process in terms of its diplomatic relations with neighbors, which is indicated by recent developments with Russia and Israel. They continued by saying that Turkey will further develop relations with Iraq and may open diplomatic channels with Egypt, but there will not be any changes to its policy in Syria, saying that the only way to normalize relations with Syria would be Assad's departure from power.