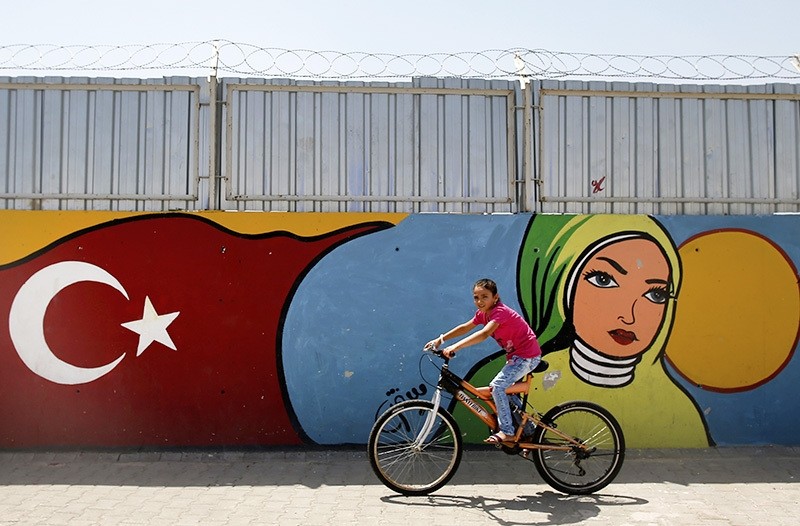 A child cycles past graffiti at the Oncupinar camp for Syrian refugees next to the border crossing with Syria, near the town of Kilis in southeastern Turkey, Monday. (AP Photo)
by Anadolu Agency Jul 14, 2016 12:00 am

He said the international community is "thankful" for Turkey's efforts to help easy the of refugee crisis that has burdened countries in the region.

"I think the international community are extremely thankful for all of what the Turkish government and the Turkish people have done in showing great hospitality to millions of Syrians who have taken refuge or come through Turkey," Dujarric said during a session at UN headquarters in New York. "Anything that will make their life easier and improve it would be very much welcome."

Ankara is mulling the idea of granting citizenship to the more than 2.7 million Syrians in Turkey, mostly living in southern cities and major metropolitan areas.

On Tuesday, Deputy Prime Minister Numan Kurtulmuş said Ankara was in the process of offering citizenship to Syrians who "can be of use to Turkey, who have never been involved in terrorism, and who can create a bridge between Turkey and Syria."

The move was hinted at earlier this month by President Recep Tayyip Erdoğan who said millions of Syrians living in Turkey would have the chance to become citizens in the country that has given them shelter.

Syria has remained locked in a vicious civil war since early 2011, when the regime of Bashar al-Assad cracked down on pro-democracy protests with unexpected ferocity.

Since then, more than 250,000 people have been killed and more than 10 million have been displaced, according to UN figures. Activist groups put the death toll at double the UN figure.

The conflict in Syria has now driven more than 4 million people-a sixth of the country's population-to seek sanctuary in neighboring countries, making it the largest refugee crisis in a quarter of a century, according to the UN.