10 p.m.: The coup attempt was first noted when social media users announced that gendarmerie forces had blockaded the Bosporus and Fatih Sultan Mehmet Bridges in Istanbul, while military jets flew low over military institutions in Ankara.

10:30 p.m.: Prime Minister Binali Yıldırım spoke to media regarding developments, said that there is a possibility that a group within the military is attempting a coup. 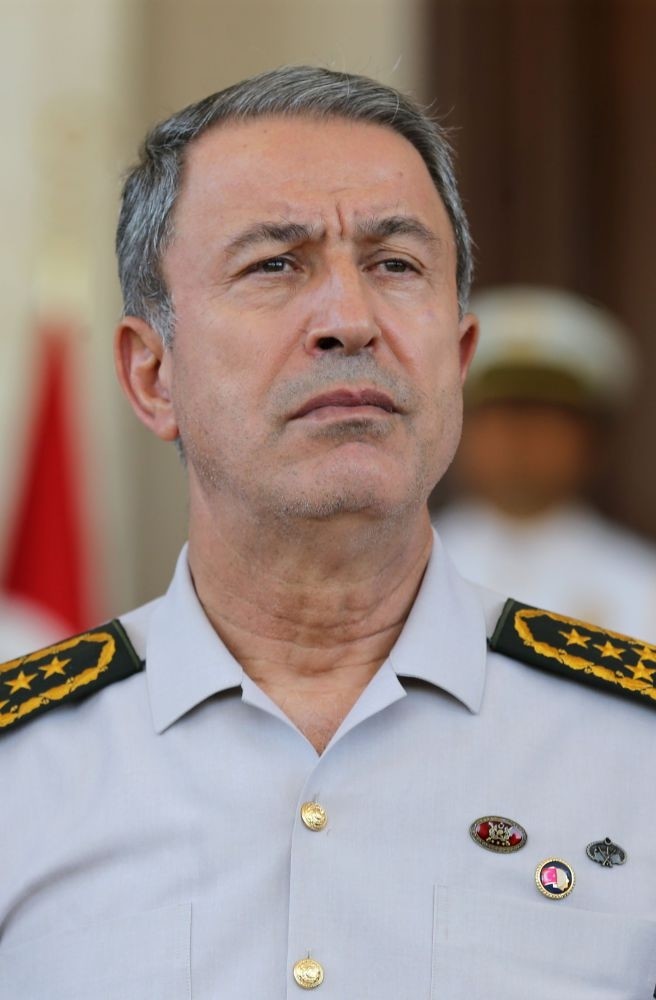 Chief of General Staff Hulusi Akar was taken hostage by Gülenist coup soldiers. Later on, Akar was rescued in a special operation. The putschists strangled Akar with a belt and pointed a gun at his head. The bruise on Akar's throat is seen in the photo.

Provincial organizations belonging to the ruling Justice and Development Party (AK Party) were surrounded by soldiers. 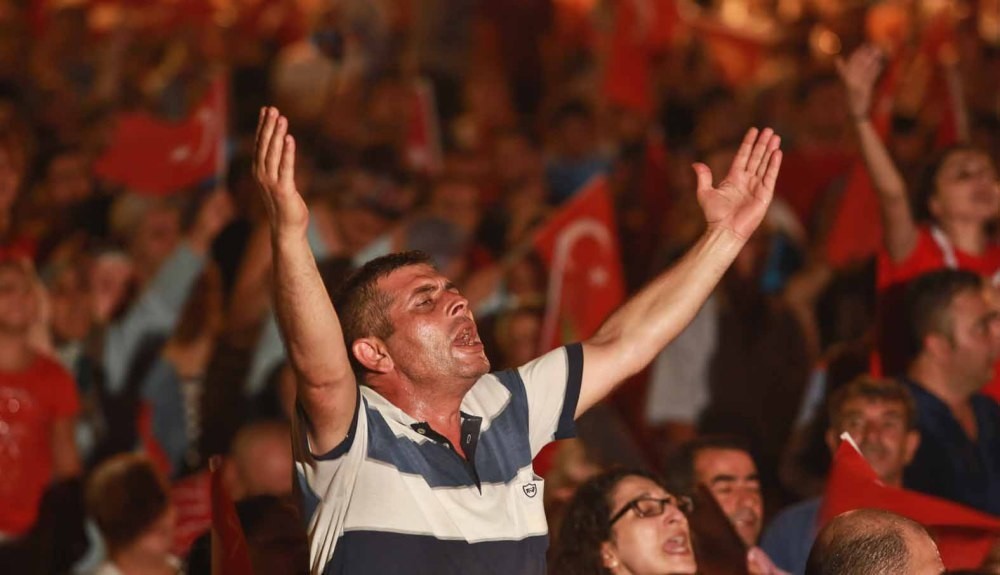 A citizen at "the Democracy Watch"

An unsigned declaration was issued on the Turkish Armed Forces (TSK) website, in which the coup actors declared that they had seized control of the country. The declaration was read on live TV by a newscaster, at gunpoint, on the state-run TRT channel.

12:20 a.m.: Defense Minister Fikri Işık announced that those attempting the coup were outside the chain of command, and said the coup declaration was fake. 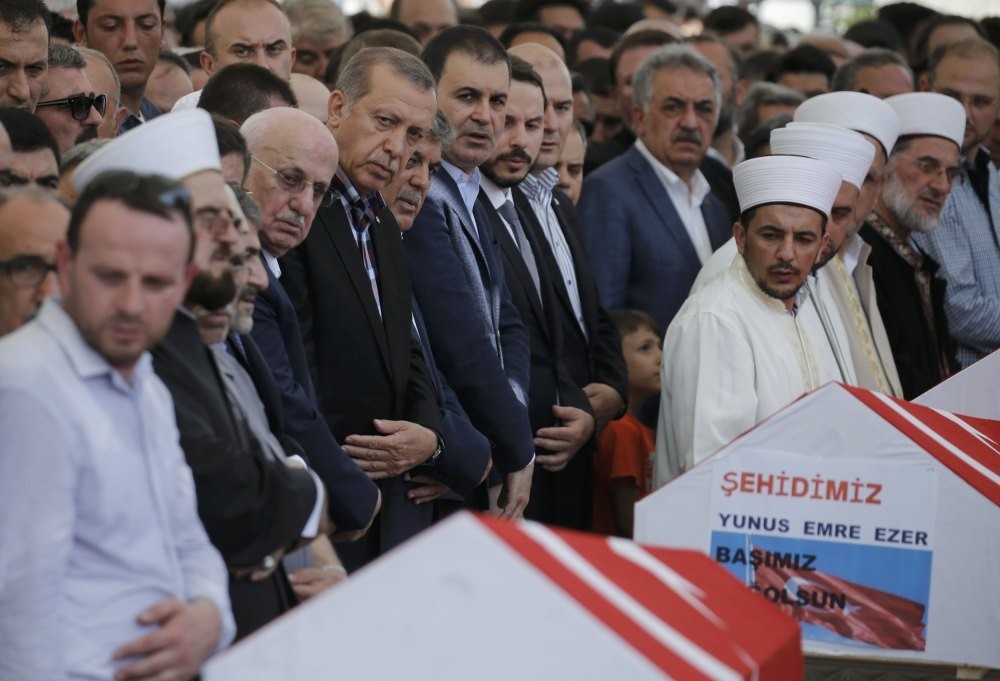 President Erdoğan at a funeral held for the fallen with former president Gül and ministers.

In Ankara, a group of coup soldiers surrounded the National Intelligence Agency's (MİT) headquarters. A helicopter flying over the area opened fire on the building.

12:30 a.m.: President Recep Tayyip Erdoğan spoke via live through Facetime from the Marmaris district of the southwestern province of Muğla.

1:10 a.m.: General Ümit Dündar, Commander of the First Army, said they were working with Governor Vasip Şahin to dismantle the attempt in Istanbul. The soldiers who occupied Atatürk airport abandoned the traffic control tower, and citizens entered the building. 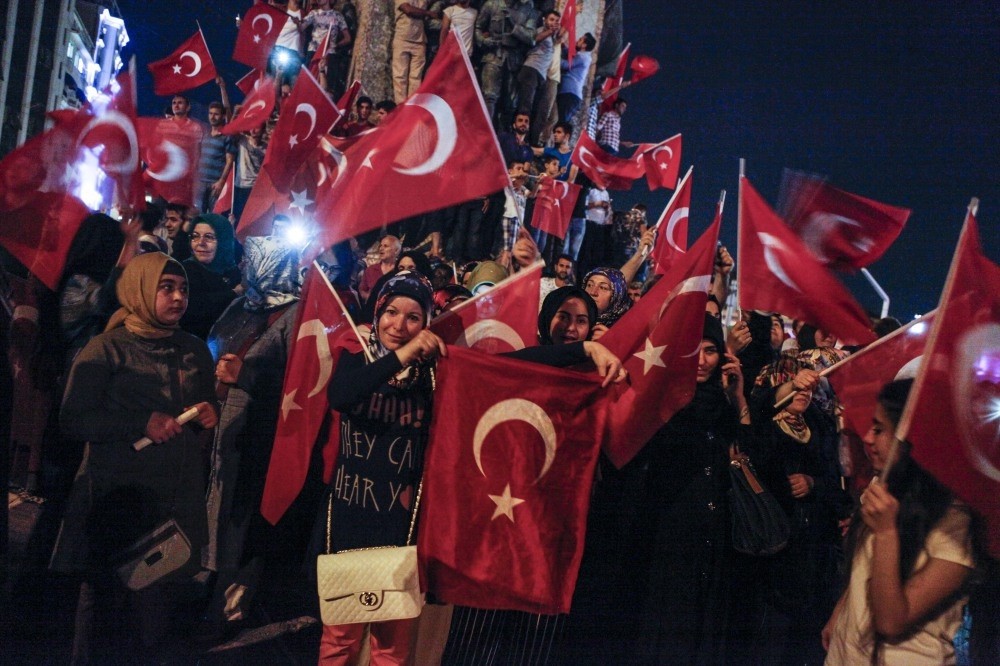 2:05 a.m.: In Ankara, a helicopter used by the coup plotters was shot down by F-16 jets. The coup actors killed 17 police officers at the Police Special Forces Training Academy, while two civilians were killed at the TURKSAT national satellite company compound.

Parliament convened 100 deputies, and announced that they will hold an emergency convention on Saturday.

Police officers and citizens neutralized four soldiers, including one senior officer, who had occupied the TRT building. The chief of Bursa's provincial gendarmerie command was detained. 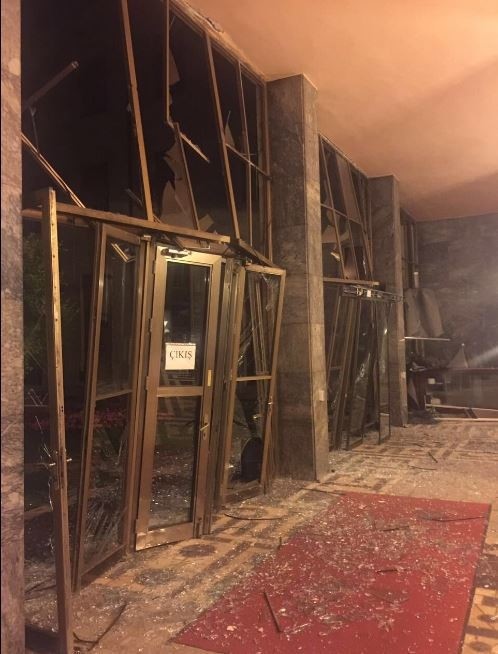 2:40 a.m.: In Ankara, explosions were heard in Parliament. The general assembly hall had 100 deputies present.

3:10 a.m.: In Istanbul, President Erdoğan's plane landed at Atatürk International Airport, as Prime Minister Yıldırım said that a no-fly zone had been declared in Ankara, announcing the situation was mostly under control. 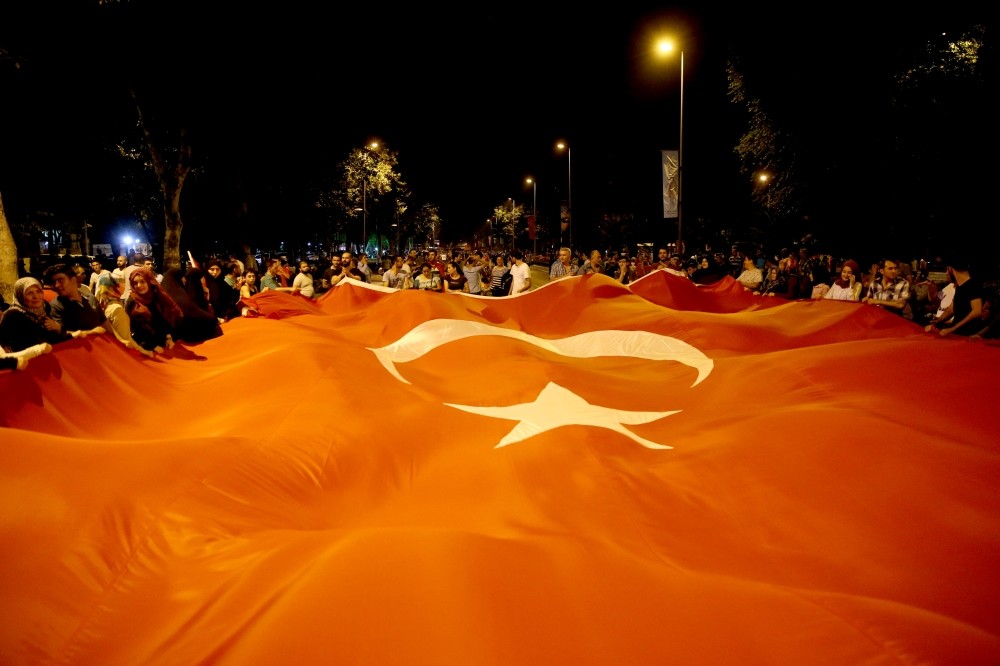 Citizens with a huge Turkish flag.

3:30 a.m.: Another explosion was heard in Parliament. Deputies sought shelter.

4 a.m.: President Erdoğan is received by many people in the airport.

4:05 a.m.: Coup actors opened fire on the hotel in Marmaris where Erdoğan was while on vacation.

4:30 a.m.: At Atatürk International Airport, President Erdoğan spoke to the media and gave the details of the attempted coup. He said: "It is auspicious to purge Gülenists from the military. It is not a coincidence that they did this before the meeting of Supreme Military Council (YAŞ)," and added that his Presidency Secretary-General Fahri Kasırga had been seized by the coup actors. 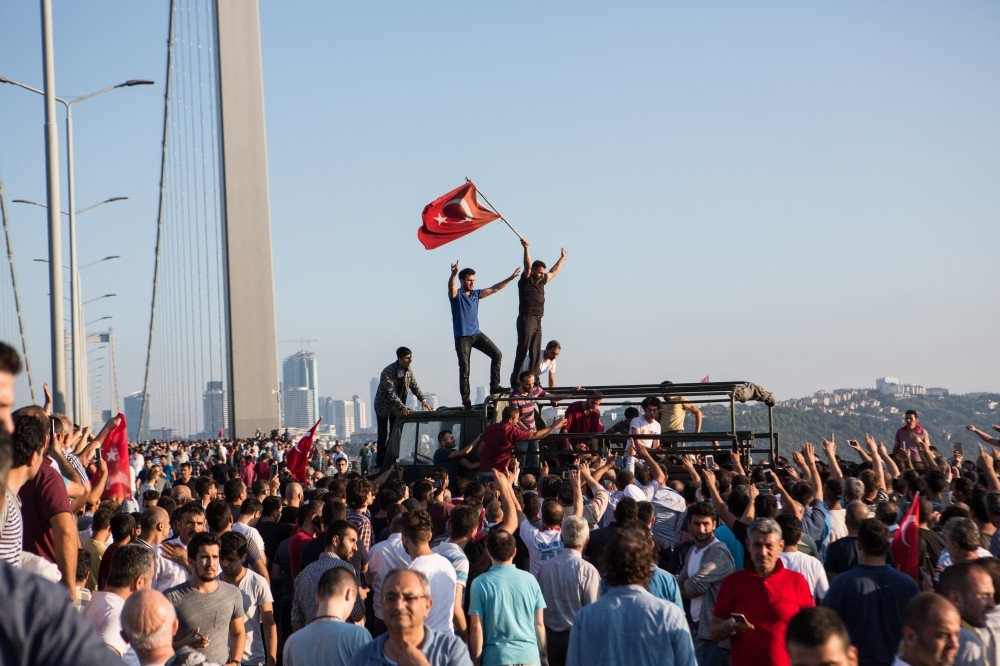 Citizens took back the Bosporus Bridge and chanted with Turkish flags.

6:30 a.m.: Erdoğan addressed people at Atatürk International Airport. "I am grateful on behalf of my nation. Last evening revealed the criminal acts by the parallel state [Gülenists]. They carried out, in a strict sense, a terror attack." He called for people to stay in the streets until everything became normal.

8 a.m.: While life returned to normal in Istanbul, 50 soldiers belonging to the coup faction surrendered to police officers on the Bosporus Bridge. Reuters reported that the General Staff building was under the control of soldiers loyal to the government.

8:15 a.m.: Police headquarters announced that 16 soldiers were killed, and 250 soldiers were detained at the Gendarmerie General Command in Istanbul. 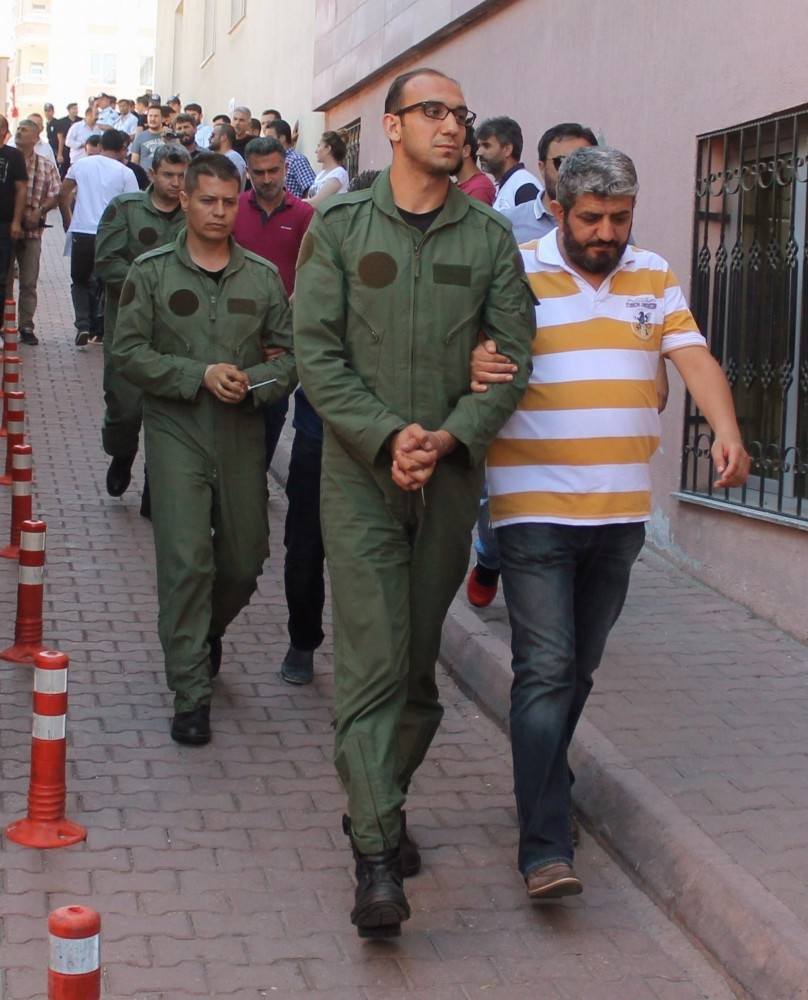 9:50 a.m.: AA reported that during the night's events, 90 people were killed and 1,154 people were injured. The statement said that 200 unarmed soldiers in General Staff building had surrendered to police officers in Ankara.

11:05 a.m.: Chief of General Staff in Charge Umit Dündar said 1,563 soldiers were arrested, while 104 coup-affiliated soldiers were killed. Those killed included 90 people, including 47 civilians, and 1,154 protestors and security forces were injured. 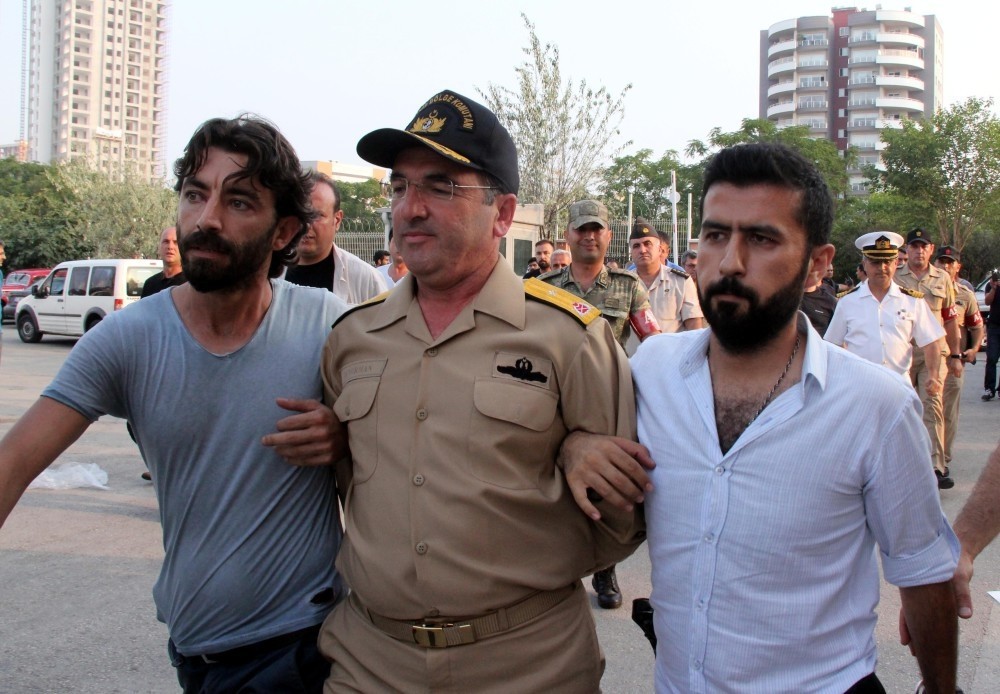 11:45 a.m.: A no-fly zone was declared in the Marmara region, covering an area including Istanbul.

A helicopter landed in Greece, with seven coup-affiliated soldiers and one civilian seeking asylum.

Around 100 Turkish military staff detained in s.eastern Diyarbakır air base in connection with failed coup attempt

Citizens did not abandon the "Democracy Watch" and waited until daylight.

4:08 p.m.: Helicopter to be returned to Turkey ASAP, asylum demand of 8 coup-involved staff to be examined, says Greek gov't

5:17 p.m.: 11 prosecutors have been arrested in connection to the failed coup attempt

6:26 p.m.: Greece says they will extradite the pro-coup soldiers who sought asylum there, FM Çavuşoğlu says

6:45 p.m.: 8 traitors who escaped to Greece following failed coup attempt to be extradited as soon as possible: FM

8:32 p.m.: President Erdoğan: I urge Obama to extradite Fethullah Gülen to Turkey; we extradited every terrorist the US demanded

Millions of citizens chanted at squares: "We want the death penalty."

10:41 p.m.: People start to gather in front of Fethullah Gülen's house in Pennsylvania to protest coup attempt in Turkey

11:07 p.m.: President Erdoğan calls leaders of opposition CHP, MHP to thank them for showing solidarity in wake of coup attempt

12:07 a.m.: A team from the Turkish army arrives in Greece to bring back 8 coup soldiers who fled Turkey after failed coup attempt: officials

01:37 a.m.: 8 pro-coup soldiers who fled to Greece are being brought back to Turkey: Greek officials

03:02 p.m.: Prime Minister Binali Yıldırım: Everything back to normal, coup-attempting terrorists have been defeated

03:31 p.m.: Turkey to request fugitives from US, EU, says Erdoğan at funeral of his advisor's brother killed in failed coup