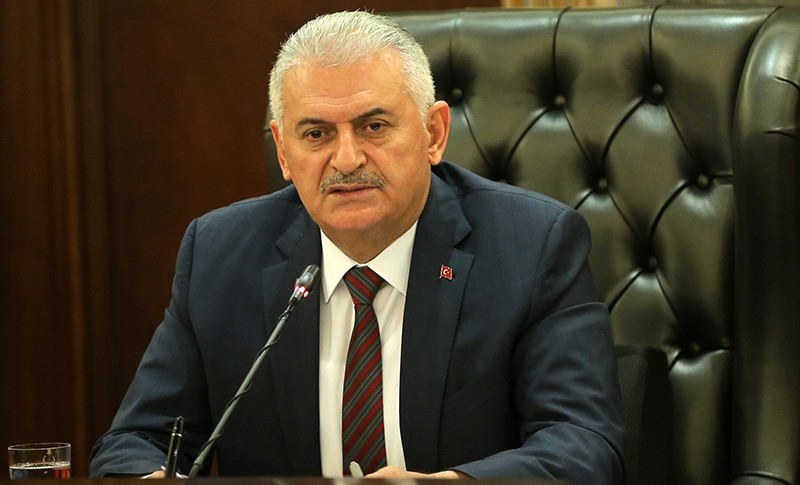 Prime Minister Binali Yıldırım said on Monday that the government will fight against the Gülenist Terror Organization (FETÖ) for its leading the coup attempt in accordance with the law, and stressed that provocations should not be allowed.

"We will act within the law," he said while speaking to the press after a Cabinet meeting in Ankara, adding that "everyone needs justice."

He also said those who attempted to bring down the democratically elected government will be held accountable for their crimes, but Turkey would not act based on emotions or a motive of revenge.

He said all politicians, regardless of their party, in addition to media outlets, supported the people against the coup attempt and thanked to them for their support, adding that people going to the streets to defend their democracy is something that needs to be stressed.

"Officials from the Republican People's Party [CHP], Nationalist Movement Party [MHP] and the Peoples' Democratic Party [HDP] who contacted us as soon as this incident was first noted,have expressed that this is something different and that party interests should be disregarded, in addition to saying that they are against this vicious attempt against the people and they are ready to give any support needed to the government. We have thanked their chairpersons [for this]."

Explaining that the parties acted virtuously, he also praised media outlets for their stance against the coup attempt.

"All media outlets have demonstrated a very national stance with the argument that coups would never have legitimacy and would be a serious blow to Turkey's future, and have acted in a manner that behooves the Turkish nation and the principles of the Republic of Turkey. For this, we thank all media outlets on behalf of our nation."

Yıldırım also updated the death toll from the deadly coup attempt, saying 208 people, including 145 civilians, 60 police officers and three soldiers were killed and 1,491 people were injured.

The prime minister urged the U.S. administration once again to extradite Fethullah Gülen, who is the leader of the FETÖ and lives in self-imposed exile in Pennsylvania.

"I say to the U.S. administration [regarding the extradition of Gülen], a group's attempting to end democracy in a country is proof," he said.

Yıldırım rejected accusations that his government is concentrating all its efforts on dealing with the aftermath of the failed coup, thereby weakening its ability to counter foreign or terrorist threats.

He also told reporters at the end of the Cabinet meeting that Turkey is strong enough to eliminate multiple threats at the same time, as it has 100 years of experience.

"Our banks, our markets are working. Our central bank is on top of its duties. Any changes in economic indices are normal and no different from fluctuations recorded on normal days," he said, and assured the media that Friday's failed coup attempt had no significant impact on the economy.

Yıldırım claimed that the Gülen Movement's involvement in the coup attempt was a definite fact, and commented on the U.S.'s statement that it would extradite Gülen if concrete evidence was provided: "If our allies still insist on us providing them with concrete evidence regarding the Gülen Movement's involvement in the coup attempt, despite the terrorist organization's numerous attempts to eliminate the elected government and the people under the directives of their leader, we will be disappointed. We may even reconsider our relations with such allies."

"Those behind this coup had a plan similar to the 1980 coup," he said, adding: "Even though many claim that they were uninformed of the coup, the public should know that with very clear documents, we have a list of detainees that includes 7,555 people." Stressing the unacceptability of the coup, he said: "Only [Bashar] Assad can do this in Syria," and said he is ashamed he has to use this comparison. "This is not an action taken by the military, but rather by a terrorist organizations," he said, adding that detentions in relation to the coup attempt will continue.

"Provocation attempts from every walk of life should be expected. We request our citizens to be aware of these attempts. This is a day to unite, not to emphasize our differences. I call out to all nongovernmental organizations and political parties to leave our differences aside and become united against a common threat," Yıldırım declared.