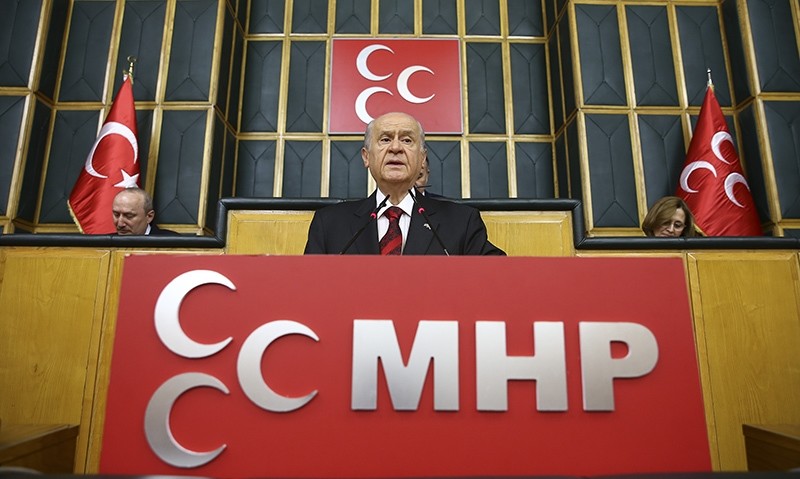 MHP Chairman Devlet Bahçeli said on Tuesday that if the AK Party is ready to introduce death penalty, MHP is ready too.

Nationalist Movement Party (MHP) Chairman Devlet Bahçeli said in a speech during the MHP parliamentary group meeting on Tuesday that the group of coup perpetrators is essentially no different from any other terrorist organization such as the PKK and DAESH. Touching on the issue of the reintroduction of the death penalty, Bahçeli said: "We are ready to support this decision, if the AK Party [Justice and Development Party] proposes it."

"Nothing can or will justify a coup," Bahçeli said. "Military boots and tanks will not suppress democracy." Bahçeli asserted that the people have opted for democracy and they are the sole authority in imposing a new government. "Military coups are the worst for the country. The era of coups has to end," Bahçeli added.

"Our party has never supported a coup and has always sided with democracy," Bahçeli said, adding that his party took action right after they saw jets flying above Ankara and unusual military activity, and realizing the grave danger that Turkey was in, he called Prime Minister Binali Yıldırım and pledged support for the government and the people.

Indicating that the state had been hijacked by the "treacherous" Gülenists, Bahçeli said: "They are the cause of the critical situation we are in. This is not the day to criticize the government. It is a fact that Gülenists want to infiltrate the Turkish Armed Forces. Let's keep Turkey alive. This is the day to stand united, as brothers and sisters. A day to protect our freedom."

Regarding the newly emerged discussion on the reintroduction of the death penalty, Bahçeli said: "The reintroduction of capital punishment has been discussed recently and is supported by the people. If the AK Party proposes the reintroduction of capital punishment, we will support them with peace of mind. We are ready to discuss capital punishment for coup perpetrators and terrorists. Let's not cause more harm to our democracy. Let's not be deceived, let's not fall into a trap. Turkey is not Iraq, Syria, Tunisia or Libya. We are Turks. We have faced many coups and coup attempts in the past, none of them as serious as the coup attempt of July 15. This incident cannot be taken lightly. Everyone should learn their lessons."