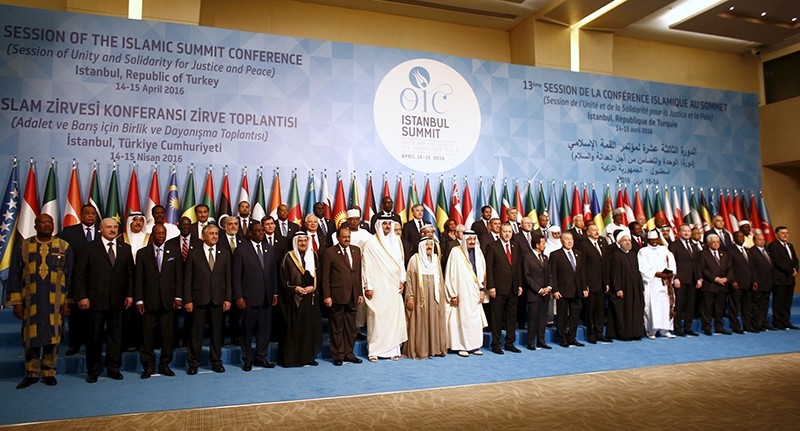 Leaders and representatives of the Organisation of Islamic Cooperation (OIC) member states pose for a group photo during the Istanbul Summit in Istanbul, Turkey April 14, 2016. (Reuters Photo)
by Daily Sabah Jul 19, 2016 12:00 am

Islamic Conference Youth Forum for Dialogue and Cooperation (ICYF-DC), an organization affiliated with the Organization of Islamic Countries (OIC), condemned the recent coup attempt by agents of the Gülenist Terror Organization (FETÖ) within the Turkish military, and called it an irresponsible attempt to stop Turkey's prominent role in the Middle East.

In a statement released on Tuesday, the ICYF-DC condemned the attempt to overthrow Turkey's democratically elected government and the constitution.

"We consider this coup not just as last attempt of narrow click of military and bureaucracy elements to overrule the democratic choice of Turkish people but as unfortunate and irresponsible attempt of internal and external power centers to stop recent development of Turkey on its course to full-fledged democracy, stability, prosperity, toward its legitimate role of stabilizer in the troubled Middle East," the statement said.

The ICYF-DC congratulated the citizens of Turkey for their courageous and mature actions to take responsibility and confront the ruthless pro-coup members to stop the coup, while they urged all members of the OIC to express solidarity with the people of Turkey, and the international community to 'strongly support Turkish democracy vital for prosperity of the entire region as well as global peace and stability.'