President Erdoğan: We provided evidence to our strategic partner US for Gülen's extradition 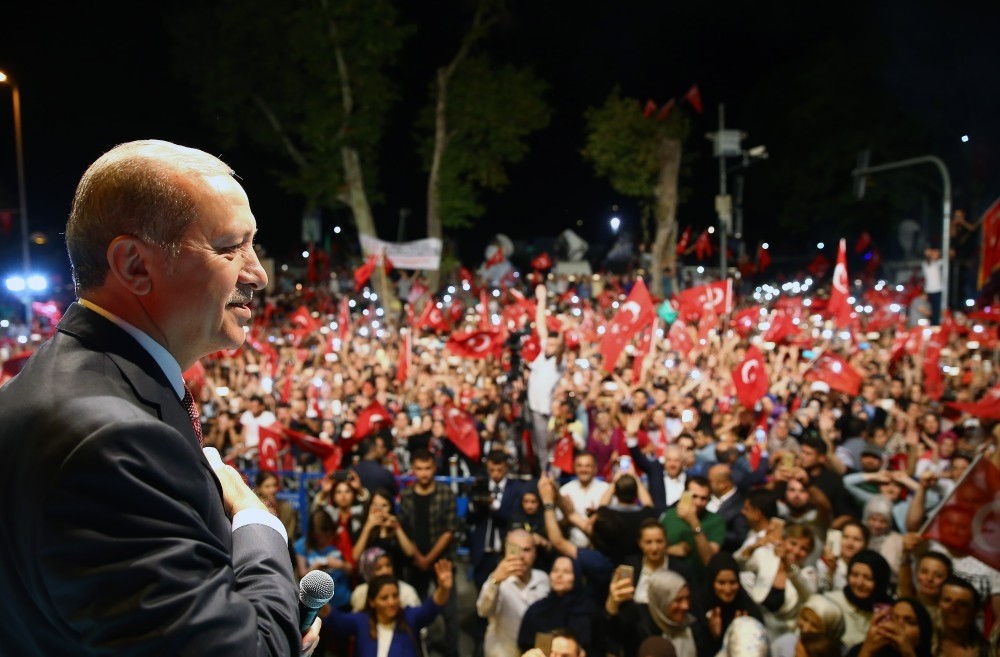 As it remains unclear whether Washington will be willing to extradite the FETÖ leader Gülen, to Turkey, President Erdoğan said Turkey has provided evidence to the U.S. that would result in the extradition of the terrorist leader

Erdoğan said that Turkey has provided evidence to the United States towards the extradition of the leader of the FETÖ terrorist organization, Fethullah Gülen, he said Turkey awaits a decision from U.S. officials. He also said that FETÖ is now an independent terrorist organization and is controlled by another "superior mind," without giving a specific name.

Speaking about the investigation into the failed Gülenist-linked coup attempt on a foreign news channel, Erdoğan thanked the Turkish nation and praised their strong resistance against the attempted coup. "As long as we join forces with the people, the tanks can do nothing."Touching upon the prevalence of Gülenists among the nation, he said, "Last week's failed coup aimed at making a minority dominate the majority of Turkey."

Erdoğan asserted that some foreign countries may have aided and abetted the attempted coup.

Commenting on the crisis with Russia that followed after Turkey downed a Russian jet in late November 2015, Erdoğan stated that the Turkish pilots who took down the Russian warplane on Nov. 24, 2015, may have had some links to the Gülenist Terror Organization (also known as FETÖ, a name given by prosecutors investigating financial and political crimes by the organization).

"The pilots who downed the Russian jet are in custody, and being questioned about their Gulenist ties," Erdoğan said, adding that the pilots may have intended to harm diplomatic relations between Turkey and Russia.

In the interview, Erdoğan touched upon the discussions regarding the reinstatement of capital punishment in Turkey, saying: "It is parliament that will decide if the coup plotters are to be executed. I said that I will approve the death penalty for the coup plotters if parliament approves it."

Responding to criticisms regarding his statements about freedom of speech, he added, "I have never been anti-media, but the freedom of expression should never be a weapon for violence."

Erdoğan also said that he learned about the coup attempt from his brother-in-law, which according to him, shows weakness in the intelligence agency.

"I went to Marmaris for a four- or five-day vacation. The news came to me regarding this coup attempt, and it was my brother-in-law who informed me. At first, I did not believe the news or take it seriously. Yet after the news was confirmed by intelligence and various sources, we took the necessary steps," Erdoğan said.

The president admitted to lapses in domestic intelligence within Turkey's intelligence agency. "If the intelligence had been correct, it could have been prevented".

Military troops loyal to the government, along with police officers and millions of Turkish citizens, succeeded on Saturday morning in quelling an attempted coup, launched by a small military junta linked to the FETÖ, which began mid-afternoon on Friday. At least 2,839 pro-coup members of the military, including 29 colonels and over 40 generals, were detained across Turkey, the Interior Ministry said on Saturday.

Turkey's top judicial body ordered the detention of 2,745 judges and prosecutors for links to the coup plotters on Saturday, while two members of the Constitutional Court were detained for involvement in the attempted coup.

As a result of the attempted coup, 161 people were killed, including 41 police officers and 47 civilians, while 1,440 others were injured. Some 104 pro-coup figures were also killed.
RELATED TOPICS