President Recep Tayyip Erdoğan met with political party leaders on Monday at the Presidential Complex to express his gratitude for their stance against the coup attempt on July 15 and to receive feedback from the leaders on steps that will be taken in the near future. 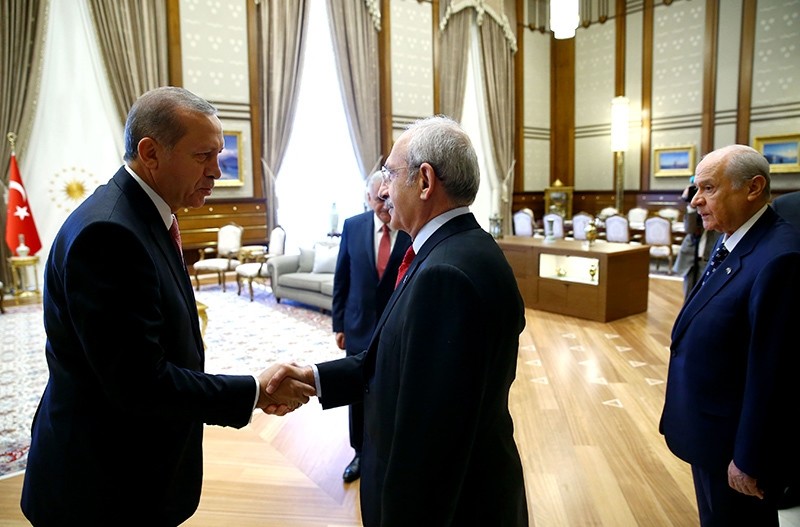 The meeting marked the first time Turkish opposition leaders visited the Presidential Complex in Ankara, only a day after CHP's anti-coup rally in Istanbul was joined by the ruling Justice and Development Party (AK Party) supporters. 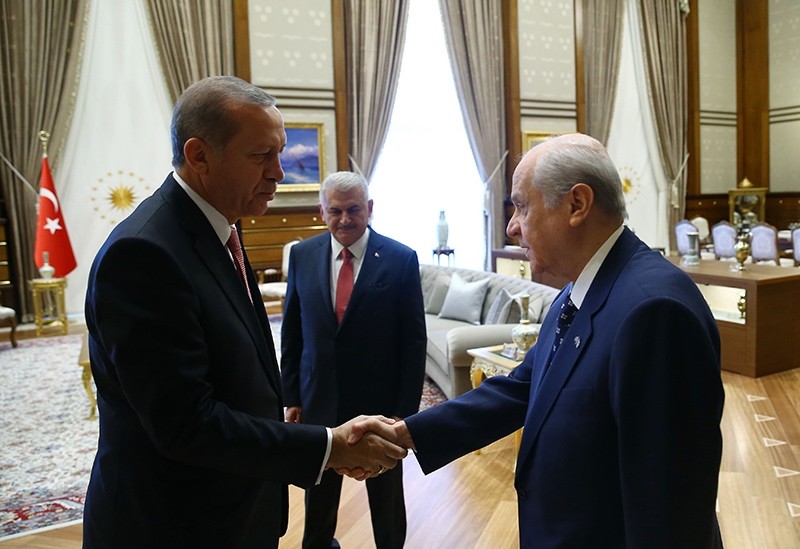 President Erdoğan invited the political party leaders through a letter which stressed the significance of unity during such critical times. The meeting itself has been described as a historic event in Turkish politics due to it being the first of its kind. During the meeting, which lasted nearly three hours and was held hours prior to a Cabinet meeting which was also held at the Presidential Complex, the leaders discussed the latest developments following the coup attempt and exchanged opinions on actions to be taken as part of operations against the Gülenist Terror Organization (FETÖ).

Presidential Spokesman İbrahim Kalın released a written statement about the meeting later Monday, stating that the President, the Prime Minister and other party leaders exchanged views on the attempted coup and the post-coup process in the country.

The President thanked all political party leaders for siding with of democracy, freedom and the rule of law with a clear and determined stance against the July 15 coup attempt, Kalın said in his statement. The president also emphasized that this spirit of unity and togetherness was the most crucial power to overcome any problems.

The president also reiterated Turkey's determined stance in the fight against the Gülenist Terror Organization (FETÖ), PKK and other threats to national security while expressing that the heroic acts of both our citizens who left their political differences aside and took to the streets and squares together, as well as our loyal security forces who followed our orders would never be forgotten. He also briefed the leaders on what happened during and after the night of July 15, the statement said.

The leaders of other parties also shared their views with the president on measures to be taken after the coup attempt.

Steps to be taken to ensure the safety, freedom and prosperity of our nation who came together under the principles of democracy and rule of law, the state of emergency, safety measures, plans fora new constitution and economic policies were evaluated in the meeting.

In the meeting, all leaders expressed their determination in the fight against all terror organizations who try to overthrow the government while stressing the importance of precautionary measures to be taken in the country against events such as the coup attempt on July 15. The president and party leaders agreed that political dialogue was needed to find permanent solutions for common issues and that all parties needed to work in cooperation to ensure that the investigation on the attempted coup and its perpetrators as well as the state of emergency would be carried out meticulously.

With all parties in Parliament decrying the coup attempt by a small clique of Gülenist-linked military commanders on July 15, the political parties displayed a united stance, pledging their support for the democratically elected AK Party government, despite their differences in opinion. The main opposition party, the CHP, organized a mass democracy rally on Sunday that was attended by all political parties and groups. As Kılıçdaroğlu read a 10-point declaration titled the "Taksim Manifesto," which condemned all the perpetrators of the coup attempt and its internal and external supporters, CHP deputy Utku Çakırözer told Daily Sabah that the party's leader had presented the manifesto to President Erdoğan during the critical meeting at the Presidential Complex. Çakırözer further noted that such a meeting is "highly important" especially during the current extraordinary period and noted that it is also important to keep the dialogue channels open.

"The unified stance we displayed on the night of July 15 on the ground and at Parliament is highly important for our country to strengthen its democracy more. In this respect, the meeting at Beştepe today is very critical for aiding the restoration of our democracy through efforts from all the political party leaders' opinions," Çakırözer said. Çakırözer urged President Erdoğan to be open to the CHP's suggestions and advice, and he also said such a receptive stance would allow enhanced relations amongst government institutions in the upcoming period.

Commenting on the joint meeting held, the AK party's Erkan Kandemir told Daily Sabah that the meeting was critical and historic regardless of its outcome. Kandemir said: "Following a bloody coup attempt, or rather a terror attack, all the parties of government had displayed a mutual stance for the first time. It is very important as it shows that the difference of opinions does not matter especially with the CHP opposing the state of emergency. There could be a difference of opinion; however, all three parties came together and expressed a stance against the coup; that is what matters here."

MHP Deputy Oktay Vural also drew attention to the importance of the meeting and said they displayed the nation's anti-coup unity. "A common mind is needed where all political parties open dialogue channels and agree to reconcile during times when all political parties are polarized. It is important for the dialogue channels to remain open following this period as well," Vural said. The MHP Chairman Bahçeli announced his party's support for the government's decision to declare a state of emergency for the sake of the national interest of the Turkish people, thereby supporting the government's struggle against infiltrators from FETÖ.

On July 15, a military junta linked to FETÖ attempted to topple the democratically elected government in Turkey and put martial law in effect. The attempt was prevented by millions of Turkish people who showed up in support of democracy, as well as by military and police units loyal to the government. A total of 264 people, mostly civilians, were killed, and over 2,000 people were injured. Opposition parties have united in condemning the coup attempt, denouncing the plot in the harshest terms and underscoring their determination to preserve democracy and the rule of law in Turkey.