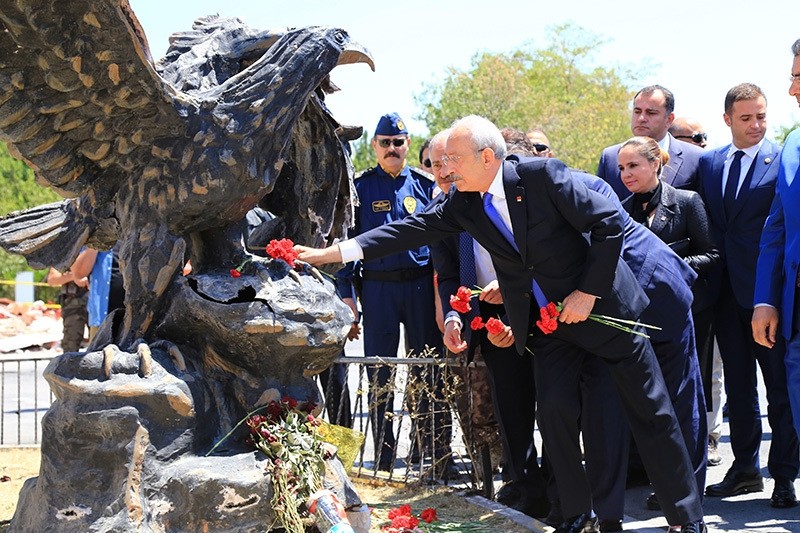 MHP Chairman Bahçeli and CHP Chairman Kılıçdaroğlu put aside their differences and expressed full backing for the fight against the FETÖ, which they blame for the failed coup attempt on July 15

The Nationalist Movement Party (MHP) and the Republican People's Party (CHP) are on the same page, as MHP Chairman Devlet Bahçeli and CHP Chairman Kemal Kılıçdaroğlu point to the Gülenist Terror Organization (FETÖ) for the failed coup attempt on July 15.

Speaking at a weekly group meeting in Parliament on Tuesday, MHP Chairman Bahçeli said the attempted coup on July 15 was an invasion of Turkey. Underlining that no previous coup attempts had such a devastating impact on Turkey, Bahçeli said that the forces that stand against Turkey's very existence are giving leverage to the leader of the terrorist organization, Fethullah Gülen, adding that the Gülenists are being utilized as weapons. "In our opinion, the attempted coup July 15 was an invasion of Turkey. FETÖ are enemies of religion and faith. The 'parallel structure' is an organization which dared to damage the Turkish state, just like the PKK. They aimed at disintegrating Turkey by hijacking all state institutions and disarming security forces."

CHP Chairman Kılıçdaroğlu said that the U.S. must extradite Fethullah Gülen to Turkey.

Speaking to the press during a visit to the Special Operations Department at the headquarters of the police force in Gölbaşı, Ankara where 42 police officers were killed by pustchist fighter jets on July 15, Kılıçdaroğlu said the coup attempt gave rise to many firsts in Turkey's republican history.

Bahçeli referred to alleged U.S. involvement in the coup of September 12, 1980 and the infamous telegram from CIA Turkey Chief Paul Henze which said "their 'boys' had done it on Sept. 12, and now their 'boys' have failed on July 15," adding that the Turkish people were united to strike down the terrorists and unveil the perpetrators. Bahçeli asserted: "We have to defend Turkey, standing together to the last man. Democracy is greater than a coup. Whether Gülenists, the PKK or DAESH, they will not be able to tear Turkey apart." Touching upon allegations that the CIA and the Pentagon were involved in the coup attempt, Bahçeli remarked: "There are strong indications showing that the CIA was involved with this foiled coup attempt. It is being said that the ISAF commander visited Turkey twice before the coup attempt. If the CIA and the Pentagon supported these treacherous terrorists, this is a serious issue. The U.S. won't be able to recover from this. Moreover if this is the case, the friendship and alliance between Turkey and the U.S. will suffer immensely."

"Commitment to democracy has emerged as a large common ground. Turkey's ability to bounce back and develop a common language was due to their sacrifice. The spread of FETÖ [Gülenist Terror Organization] within the Turkish Armed Forces is something we should all think about. Political parties have certain differences of opinion, but we must all work together to promote democracy and meritocracy in Turkey," Kılıçdaroğlu said

He said that Gülen "absolutely must be extradited to Turkey. If he is being held responsible for what happened and he wants to come clean, he should come to Turkey and stand trial in an independent court of law."

Stating that the coup was an attempt to transfer the nightmarish atmosphere from Syria to Turkey, Bahçeli said: "How sad it is that people will starve to death if a corridor is not opened to supply humanitarian aid to Aleppo. The vein of life to Aleppo has been cut since July 8, by the Democratic Union Party (PYD) and the Assad regime. Our kin and our religious fellows are in a difficult situation. Even if we have our own domestic issues, we cannot be a mere spectator to Aleppo. The murderers who shed Muslim and Turkmen blood in Iraq have now hungrily stepped into our country. FETÖ is a terrorist structure that has clung onto Turkey. They said on Sept. 12, 'Our boys have won.' On July 15, their bastard children lost. The national will stood against soldiers in tanks, and slapped them in an Ottoman fashion. The nation realized the game and removed their masks. This spirit of unity definitely has to be protected, as the Republic of Turkey is now vulnerable to a security gap."

Countries we regarded as friends laid a snare under us, Bahçeli said, adding: "If we cannot align together, if we cannot praise the soul of solidarity, we cannot even find an imam to recite the azan in our country. Each of us has to defend the country that was entrusted to us by Mustafa Kemal Atatürk and our founding heroes to the bitter end. The Turkish nation is greater than its traitors, democracy is greater than FETÖ. Turkey is strong enough to not fall prey to tyrants." Stressing the importance of conveying a message of unity, Bahçeli said: ''We are in the same boat against the traitors, we stand together against them."