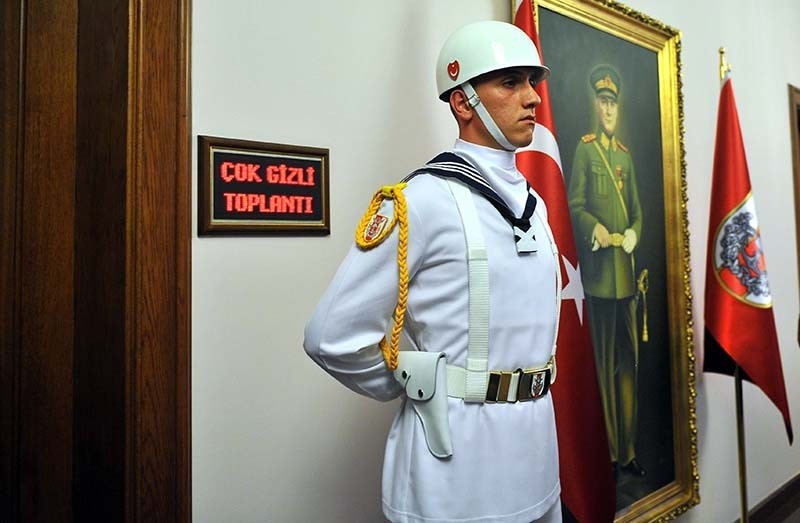 President Recep Tayyip Erdoğan held a meeting with Prime Minister Binali Yıldırım and Chief of General Staff Gen. Hulusi Akar on Wednesday prior to the annual Supreme Military Council (YAŞ), which has been rescheduled to July 28 following the failed July 15 coup attempt by the Gülenist Terror Organization (FETÖ).

The agenda of the YAŞ meeting will be to try to implement new procedures. Prime Minister Yıldırım will chair the meeting, and sweeping changes of high-level positions are expected. Along with Yıldırım, National Defense Minister Fikri Işık, who is attending the YAŞ meeting for the first time, and several other force commanders and top-ranking generals will be there.

A number of commanders will be superannuated, leaving their posts to the highest ranking generals. Sources have reported that the YAŞ meeting will discuss promotions and appointments and will address the recent, failed, Gülenist coup attempt and details of the incident will be discussed. Military sources said prior to the coup attempt that around 1,500 military personnel who have alleged connections to the terrorist Gülen Movement and are charged with military espionage will be dismissed, and the number is likely to be greater after the YAŞ meeting.

Thursday's meeting described as extraordinary due it being held at the Prime Ministry's Çankaya Palace for the first time and not as is customary at the headquarters of the General Staff. According to recent remarks from Yıldırım, the YAŞ decisions will be finalized on the same day, as opposed to previous meetings, which lasted for three days. The critical meeting will further address the FETÖ and the recent coup attempt and address the strategy to be taken against the organization.

President Erdoğan had said last week that the Turkish Armed Forces (TSK) would be swiftly restructured and that it needs "fresh blood."Yıldırım also said new security measures will be taken soon and state institutions, particularly the military, would quickly be restructured. Concerning the restructuring of the military, sources report that names for promotion and new appointment of generals are not expected to be released.

As part of the ongoing operations to remove Gülenist pro-coup soldiers from the military, the Defense Ministry appointed Van Gendarmerie Lieutenant General İsmail Metin Temel as the Second Army Commander on Wednesday, replacing General Adem Huduti, who was detained in Malatya province after the failed coup attempt.

During the YAŞ meeting, two lieutenant generals will attend to replace 2nd Army Commander Gen. Adem Huduti and Gendarmerie Forces Commander Gen. Galip Mendi. The mastermind of the coup attempt, former Air Force commander and Supreme Military Council (YAŞ) member Gen. Akın Öztürk will not be able to attend the meeting as he is under arrest. Sources say radical decisions will be made at the meeting and changes to military commanders are also expected. Naval Force Commander Adm. Bülent Bostanoğlu is likely to be superannuated and Fleet Commander Vice Adm. Veysel Kösele is expected to replace him.