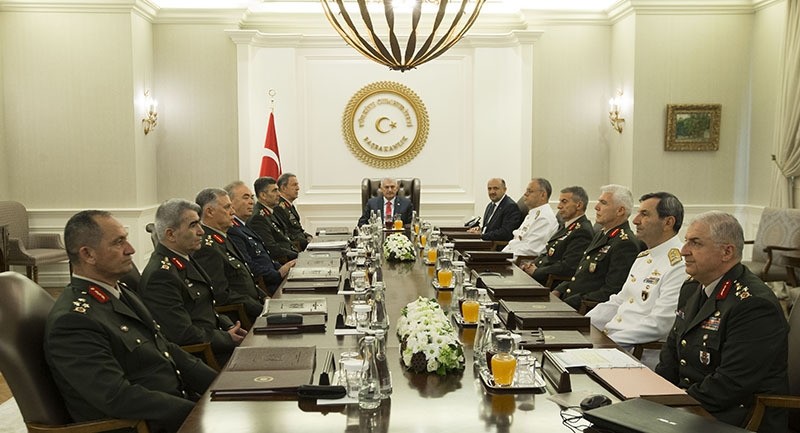 General Hulusi Akar will remain in his position as the Chief of General Staff and the command echelon of the Turkish military will stay the same, Presidential Spokesperson İbrahim Kalın announced Thursday following the critical Supreme Military Council (YAŞ) meeting.

99 colonels were also promoted to general and admiral positions, while the term of office of 20 generals and admirals was extended by a year.

The council's decisions were submitted to President Recep Tayyip Erdoğan for approval, Kalın said. Afterward, Erdoğan met with the YAŞ members at a dinner at the Presidential Palace.

The most critical YAŞ meeting in Turkey's republican history after the July 15 failed coup attempt that was carried out by members of the Gülenist Terror Organization (FETÖ) was held under the chairmanship of Prime Minister Binali Yıldırım in Ankara.

Thursday's meeting was described as extraordinary since it was held at the Prime Ministry's Çankaya Palace for the first time, and not as is customary at the headquarters of the General Staff, and according to Yıldırım, the decisions made at the meeting were to be finalized on the same day as opposed to previous meetings that lasted for three days. Along with Yıldırım, National Defense Minister Fikri Işık, who attended the YAŞ meeting for the first time, and several force commanders and top-ranking generals were at the meeting where a number of commanders were discharged and their posts given to the highest ranking generals.

Prior to the meeting, Yıldırım visited Anıtkabir –Mustafa Kemal Atatürk's mausoleum – with the YAŞ members. He defined the July 15 coup attempt as the second Turkish War of Independence in his writing in the Anıtkabir memorial book. Yıldırım said: "On the night of July 15, the people were victorious in the Second War of Independence. They have shown that the people would not surrender their will to any kind of tutelage while defending democracy and their country. Millions of people rushed to the streets, to their martyrdom, conveying the message that Turks still possess the spirit of independence. It is definite that we will eliminate each and every terrorist organization that targets our people and country. I wish the Supreme Military Council meeting will yield beneficial results for our country and the Turkish Armed Forces."

Erdoğan met with Yıldırım and Chief of General Staff Gen. Hulusi Akar a day before the YAŞ meeting. After the meeting, the list of military personnel who were removed from the Turkish Armed Forces (TSK) was published in the Official Gazette. As their removals were done under statutory decree, the people included on the list will never be able to work in any state institution in the future.

Moreover, with a statutory decree, the promotion criteria in the TSK Personnel Law were reformed. With the reform, the prime minister will be able to promote military personnel if there is a dire need for a higher-ranking officer. The new law allows generals to be promoted almost instantly if need be.

Two of Turkey's four-star generals, who are members of the Supreme Military Council (YAŞ) were asked to submit their resignations on Thursday, hours before the meeting. Training and Doctrine Command head Gen. Kamil Başoğlu and Land Forces Chief of Staff Gen. İhsan Uyar reportedly submitted their resignations.