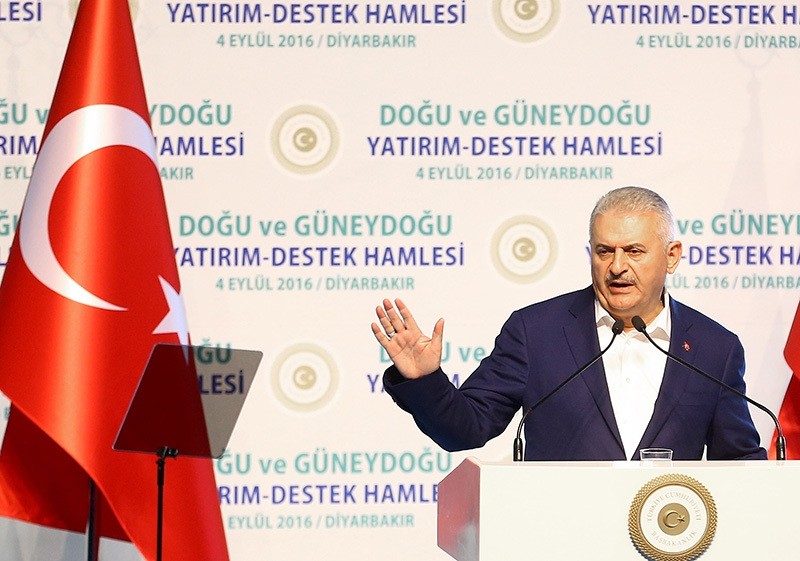 Yıldırım annouced on Sunday that the government will make a TL 10 billion invesment in seven provincial centers damaged by PKK terrorism, in particular the historical Sur district of Diyarbakır.

The Development Action Plan will provide a total of 16TL billion investment in 23 provinces, TL 10 billion of which will be concentrated in seven provinces.

The state will hire any location in a symbolic rental price to the investors who want to open new factories in southeastern Turkey.

The main aim of the plan is to construct 10 new factories in 23 provinces per year. The PM also announced that zero interests will be provided for investors for their loans on buying new equipment.

The PM highlighted the importance of finding solution to ending unemployment, saying that new job opportunities will be provided.

"67,000 new houses will be built. 15 new hospitals, 3 new stadiums and 51 new police stations will be constructed," PM Yıldırım said in Diyarbakır. He continued that "new attraction centers will be built in 23 provinces and we have divided them into five groups."

Speaking about Turkey's fight against terror along its borders, Yıldırım emphasized that Turkey is not against Kurds but against all terror groups in the region.

Pointing out the importance of fighting against Daesh, the PKK and the PKK's Syrian wing PYD/YPG in the region, PM Yıldırım said, "Operation Euphrates Shield is necessary not only for Turkey's border security but also for the stability of Syrian territories. We are there for this purpose."