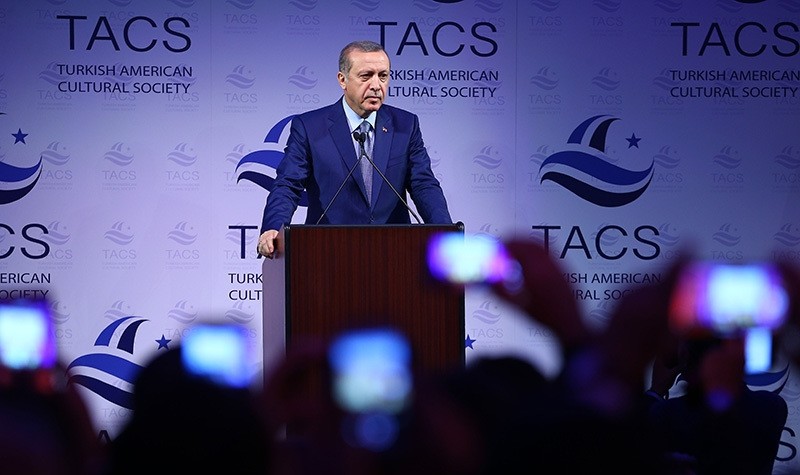 President Recep Tayyip Erdoğan said on Thursday that U.S. Vice President Joe Biden did not know about two planes of weapons airdropped in Kobani to YPG/PYD when he mentioned it at a conversation during his visit to New York on the sidelines of the 71st session of the United Nations General Assembly.

Speaking at an event organized by the Turkish American Cultural Society (TACS) in New York, Erdoğan said that when he told Biden about the weapons being dropped to Kobani three days ago, Biden responded by saying that he was unaware of it.

"I told him I am aware of it" Erdoğan said and continued by adding that the U.S. had done the same thing in the past and half of the weapons ended up in the hands of Daesh terrorists.

Erdoğan also said that Turkey aims to open up a safe zone in northern Syria as part of Operation Euphrates Shield.

The targeted region includes the towns of Jarablus and al-Rai, which have been liberated from Daesh by moderate opposition forces supported by the Turkish military since Ankara launched Operation Euphrates Shield late last month.

Erdoğan said the government wants to build settlements in the safe zone for Syrian refugees in Turkey to return to their country, or for those in Syria who seek to flee the ongoing bloodshed.

He also said a UN convoy hit inside Syria earlier this week was struck by regime forces while entering Aleppo, where nearly 300,000 residents are in need of humanitarian aid amid an ongoing siege.

Assad's culpability in the atrocity must be exposed, according to Erdoğan. "We need to see this. If we are unable to see this reality, shame on us."

Erdoğan's remarks on a safe zone in Syria come one day after State Secretary John Kerry demanded all flights above certain parts of the war-torn Mideast country be grounded to allow for an unimpeded flow of aid.

Kerry's words were taken to mean a partial no-fly zone, a move Turkey has demanded but one the Obama administration has been reluctant to implement, citing logistics and troop commitments.

The civil war in Syria has killed hundreds of thousands of victims and left the country in utter ruin.

Its neighbors have also borne the brunt of the ongoing violence, with Turkey alone shouldering the bulk of the refugee response, hosting nearly 2.7 million UN-registered refugees within its borders.

Meanwhile, Erdoğan also criticized the U.S. for failing to extradite Fetullah Gülen, the leader of Gülenist terror cult (FETÖ), which is accused of infiltrating Turkish state institutions and carrying out a bloody coup attempt on July 15 which killed at least 240 people.

"Till now, Turkey submitted 85 packages of documents regarding FETÖ but the U.S. says these documents are not enough for them to extradite him" Erdoğan said.

He added that when the U.S. requested Turkey to extradite 10 terrorists, Turkey caught nine of them and extradited them, but the U.S. still keeps Gülen.

The president also said that the U.S. should not allow Gülen, regarded as a fugitive criminal by Turkey to give interviews to media outlets, which he said would damage bilateral relations between the two countries.

He also criticized the U.S. for allowing Gülenist figures to freely carry out propaganda and anti-Turkey sentiment in the congress.

"How would the U.S. administration view it if Turkey allowed an enemy of the U.S. to speak against it in our parliament?" Erdoğan asked, and continued by saying that such hostile attitude to Turkey raises anti-American sentiment in the country.