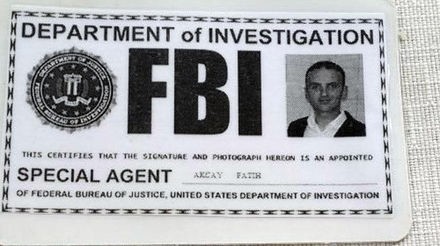 The suspect, identified as Fatih Akçay, lives in Belgium and worked as a teacher in Antwerpen, sources said.

His interrogation continues at the Sakarya Police Directorate. Authorities are trying to figure out how the suspect obtained the fake FBI card.

The suspect can be seen with Fetullah Gülen in photographs posted on his social media accounts, which describe him as an "IT worker at NATO" and a "volunteer at Fetullah Gülen Academy."

According to Turkish government, FETÖ-headed by U.S. based Fetullah Gülen, was behind the July 15 failed coup attempt as well as other efforts to destabilize Turkey dating back to 2013 by using supporters within state institutions, particularly the military, police, and judiciary.