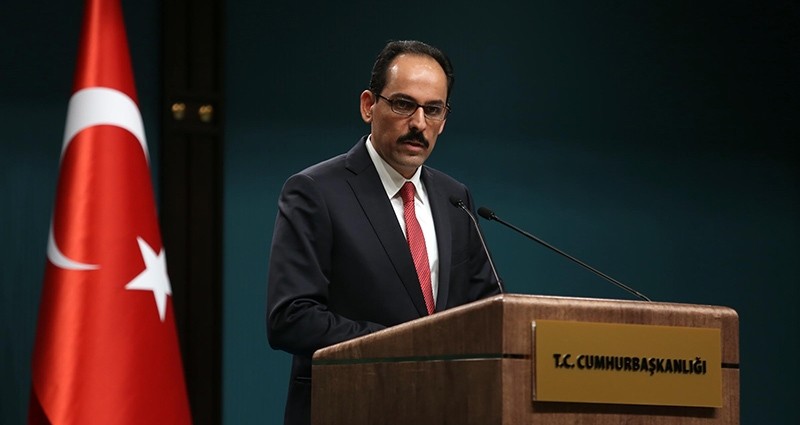 Ankara has reiterated its concern over a possible role for the PKK and People's Protection Units (YPG) terror organizations in the upcoming Mosul operation once again, amid reports that the PKK terrorists will partake in the offensive.

Presidential spokesperson İbrahim Kalın said yesterday during a press conference that the reports on PKK involvement in the Mosul offensive will further escalate the problem in the region.

"Reports that the PKK may take part in the Mosul operation greatly worry us," he said, and also added that Turkey had no "secret agenda" in Iraq and favored solving problems with Baghdad through dialogue. "Those who think otherwise are either acting maliciously or are under a huge delusion," he added.

Mosul, home to up to 1.5 million people, has been at the heart of Daish terror group's self-declared caliphate in Iraq since 2014. The offensive to liberate the city is expected throughout towards the end of October.

"A mistake made there could result in hundreds of thousands of people becoming refugees," Kalın said, warning that the crisis will escalate to becoming a regional issue. "A mistake in the Mosul operation will not be limited to Iraq, it will impact the whole region," he added.

The PKK, a designated a terrorist group by Ankara and its Western allies, the U.S. and European Union, has its leadership based in the Qandil mountains of northern Iraq.

Turkey is part of the U.S.-led coalition against Daish in Syria and has played a frontline role there. It says its troops are in Iraq as part of an international mission to train and equip Iraqi forces to fight Daish.

The presidential spokesperson also said Turkey has information that several hundred fighters from the YPG are still in the area around the Syrian town of Manbij despite its demands that they withdraw.

Kalın told reporters in Ankara that Turkey continued to insist that these fighters move back east of the Euphrates river. Turkey launched an incursion into northern Syria almost two months ago, backing Syrian rebels in their fight against the Islamic State and seeking to prevent Kurdish territorial gains.

The presence of Turkish troops in Iraq was recently criticized by Baghdad. President Recep Tayyip Erdoğan and Prime Minister Binali Yıldırım said Turkey's military presence at the Bashiqa Camp in northern Iraq would continue despite the parliament in Baghdad branding Turkish forces as "occupiers" earlier this week.

Last December, Turkey sent some 150 troops and about two dozen combat tanks to Bashiqa, located some 12 kilometers northeast of Mosul.

A day after the Turkish parliament voted on Oct. 3 to extend its army's mandate at Bashiqa Camp, Iraqi lawmakers rejected the extension and demanded a review of the country's ties with Turkey.

On Tuesday, Erdoğan said Iraqi Prime Minister Haidar al-Abadi himself had asked for the formation of a military base in Bashiqa. Erdoğan told Abadi to "know his limits," reminding him the Turkish military presence in Iraq was due to a demand made by Baghdad itself.

The presidential spokesperson also said military cooperation is being discussed with Russian partners. "A decision was made to cooperate in defense industry with Russia in Istanbul [during Putin's visit]. The details are being discussed by our related units…In principle we are favoring this. We will consider the best offer that would address our needs and national interests and are ready to discuss with those making the offers," he said. Kalın also said it is only normal for Turkey to possess an air defense system when there are internal and external terror threats targeting its security.

"President Erdoğan talked on the main frame with President Putin and they have agreed to the general outline," he added.

Turkey and Israel will complete the process of exchanging ambassadors within one week to 10 days, presidential spokesman Kalın also said, without giving the names of the person appointed, a key step in a process of normalizing ties that were ruptured six years ago.

His comments during a news conference came after the two countries agreed yesterday to deepen cooperation in the energy sector.

After the Mavi Marmara raid, the Israeli government took a step toward reconciliation on March 24, 2013, when Israeli Prime Minister Benjamin Netanyahu, under the encouragement of U.S. President Barack Obama, apologized for the mishandling of the raid during a conference call with then Prime Minister Recep Tayyip Erdoğan. Israel also agreed to pay compensation to the families of the victims.

Having reached a consensus on lifting the Gaza blockade, Israel and Turkey signed a deal. Israeli soldiers will be exempt from legal and criminal responsibility and individual Israeli nationals also would not be held criminally or financially liable for the incident according to the deal.

U.S. has not understood seriousness of Gülen extradition request

U.S. officials do not appear to have understood the seriousness of Turkey's call to extradite the head of Gülenist Terror Group (FETÖ), Fethullah Gülen, the figure behind the July 15 failed coup attempt, Kalın also said during the news conference.

Ankara has demanded that Gülen be extradited to Turkey from the United States, but U.S. officials have said they are still reviewing the evidence Turkey has provided.