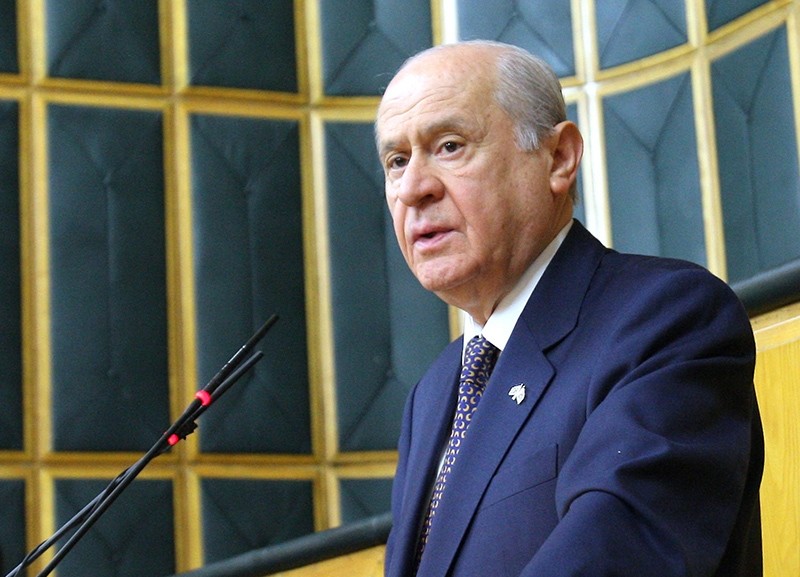 Opposition Nationalist Movement Party (MHP) Chairman Devlet Bahçeli criticized Iraq for opposing Turkey's involvement in the operation to liberate Mosul from Daesh, saying Turkey is entitled to protect its interests in general, and the rights of Turkmens living in the city in particular.

Speaking at his party's parliamentary group meeting in Ankara, Bahçeli said that Turkey cannot leave Turkmens to suffer at the hands of Daesh terrorists and others who want to change the demographics in the region.

"Where was Abadi when Daesh invaded Mosul two years ago?" Bahçeli asked, and continued by saying that the city is significant for Turkey as it shares a 350 kilometer long border with Iraq and terrorists pose a significant threat.

Bahçeli said that it is meddlesome of foreign powers in the Middle East to turn a deaf ear to the calls and requests of Turkey, which is directly affected by the ongoing developments in the region.

Turkey has consistently warned against threat of sectarian and ethnic clashes in Iraq. The population in Mosul, Iraq's second largest city after Baghdad is largely populated by Sunni Muslims, including Arabs, Turkmens and Kurds.

Turkey argues that, if the regional ethnic and religious sensitivities are not taken into consideration, the clearance of Daesh from Mosul will not ensure the establishment of stability and peace due to new Shiite-Sunni, Turkmen-Kurdish tensions. Ankara has repeatedly proposed that the operation must be conducted by supporting the local forces in Mosul, rather than outside fighters brought in by the Iraqi central government or the PKK's Syrian offshoot the Democratic Union Party (PYD) and PKK terrorists, also to protect Iraq's territorial integrity.

Meanwhile, Bahçeli also suggested that his party is in favor of continuing the parliamentary system but they are not against a referendum on the presidential system.

"MHP prefers the continuation of the parliamentarian system through a revision and reform" Bahçeli said, adding that it does not object to bringing the issue to the people through a referendum.

He continued by saying that if the Justice and Development (AK Party) Party brings the draft constitutional reform package to the parliament; it will produce plausible and sound results.