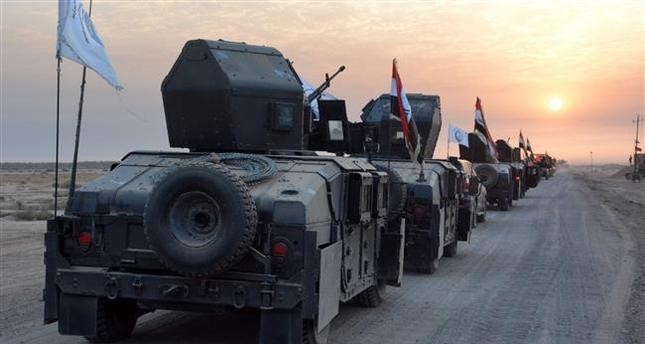 Iraqi military vehicles in eastern Salaheddin province, south of Hawijah, on October 10, 2016.
by Daily Sabah Oct 25, 2016 12:00 am
The former Iraqi Prime Minister Nouri al-Maliki said on Sunday in a speech that the liberation of Mosul will be followed by other cities in Iraq and the region, including Raqqa, Aleppo and Yemen.

Speaking at the Islamic Awakening and Combating Radicalism conference, Maliki said the operation "We are coming, Nineveh," which was launched by the Iraqi military for the liberation of the city of Mosul, will also include other cities in Iraq and the region, so that they will also say "We are coming, Raqqa" , or "Aleppo", or "We are coming, Yemen."

He also thanked Iranian Supreme Leader Ayatollah Ali Khamenei for holding the conference in Iraq. The two-day conference brought together many Arabic and Islamic figures and began in the Iraqi capital, Baghdad, on Saturday, Oct. 22, and was concluded on Sunday afternoon.

The Iraqi prime ministry post was taken over by Haidar al-Abadi from Maliki in August 2014, following devastating defeats of the Iraqi military against Daesh, especially by leaving their weapons and deserting against the terrorist organization in Mosul. It was believed by American officials that al-Maliki could overcome the sectarian division in Iraq when he won the office in 2006. However, during his tenure as prime minister, he applied sectarian policies against Sunnis who had increased the tension between Sunni and Shiite populations, which resulted in the death of thousands of people, as suicide bombings became a part of Iraqi politics, and paved way for Daesh's easy advance over northern and western Iraq.
RELATED TOPICS