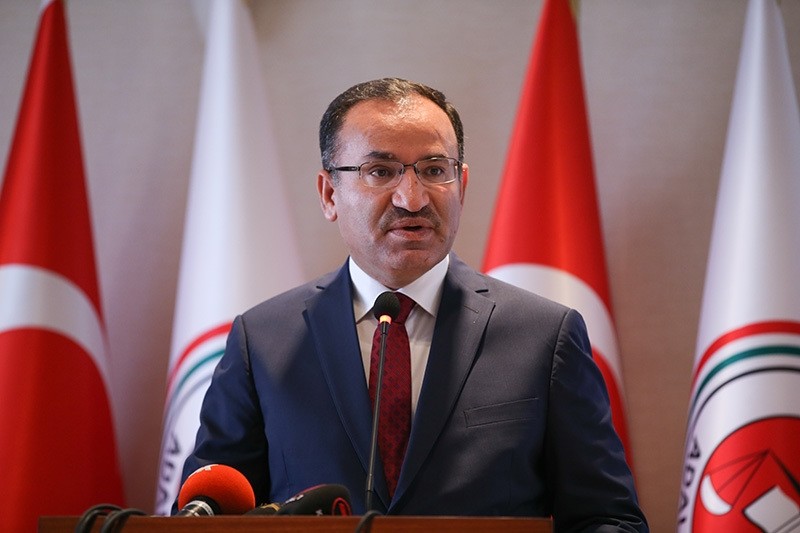 Turkey did whatever was prescribed by the rule of law, regarding the detention of pro-PKK Peoples' Democratic Party (HDP) deputies, and the same justice applies to all citizens, Justice Minister Bekir Bozdağ said on Friday. Bozdağ's comments came after HDP deputies, including two co-chairs of the party were detained after refusing to bear testimony in anti-terror probes carried out by prosecutors.

Speaking at a press conference after the PKK terrorists carried out a deadly terror attack in southeastern Diyarbakır city in response to the detentions, Bozdağ said that the detention of HDP deputies was in line with the rule of law and the constitution.

"The same justice that applies to all citizens is also being applied to parliamentarians" Bozdağ said, noting that the deputies were detained because they refused to bear testimony when they were summoned by the prosecutor.

Bozdağ continued by saying that the procedures are totally in line with law.

Bozdağ also touched upon the deadly PKK terror attack which took place right after the detention of deputies and said that it was carried out by a bomb-laden vehicle.

The terror attack followed the detention of 11 lawmakers from the HDP, including the party's two co-leaders Figen Yüksekdağ and Selahattin Demirtaş and parliamentary group leader İdris Baluken.

The HDP has come under fire for its links to the PKK. Members of the party have so far declined to call the PKK a "terrorist group," attended the PKK militants' funerals, two of whom were the suicide bombers that killed tens of civilians in multiple bombings in Ankara.

Bozdağ also spoke about the latest decision of Belgium, which does not see the PKK as a terrorist organization, even though the group is recognized as a terror group by the U.S. and EU. He said that Turkey is left alone in its fight against terror and added that the international community does not support Turkey's counter-terror efforts.

He also touched upon the increasing racist and Islamophobic attacks in Germany and France, and said that 75 mosques in Germany were attacked in 2015, but police only launched investigations for 15 of them and in France, many mosques are vandalized or closed down.