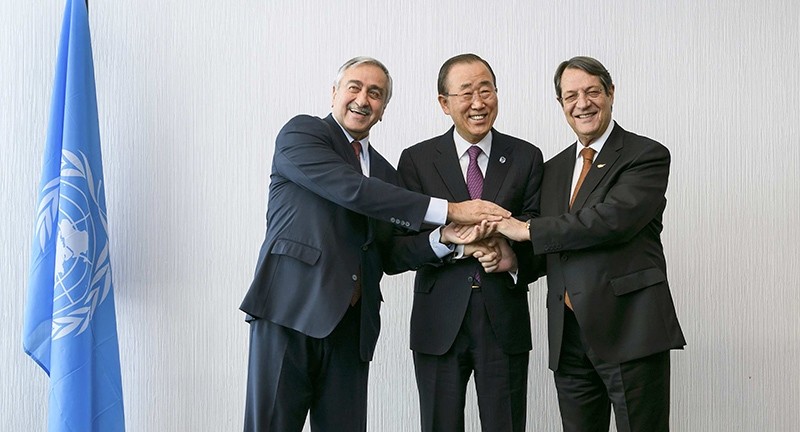 U.N. Secretary-General Ban Ki-moon (C) pose for photographers with the President of Turkish Republic of Northern Cyprus, Mustafa Aku0131ncu0131 (L) and Greek Cypriot leader Nicos Anastasiades during the Cyprus reunification talks (Reuters Photo)
by Daily Sabah with Wires Nov 07, 2016 12:00 am
A deal to reunite the divided island of Cyprus is within reach, United Nations Secretary-General Ban Ki-moon said on Monday as he opened a round of talks in a snow-bound hotel overlooking Lake Geneva in Switzerland.

The five days of U.N.-led negotiations between Turkish Cypriot President Mustafa Akıncı and the Greek Cypriot leader Nicos Anastasiades will concentrate on the question of territory "as well as all other outstanding issues interdependently", Ban said.

"The two leaders have expressed their hope that this meeting will pave the way for the last phase of the talks in line with their shared commitment to do their utmost in order to reach a settlement within 2016," he told reporters.

Ban praised both men for achieving "significant progress" in the UN-backed peace process which began 18 months ago.

"At the same time a number of sensitive and difficult issues still remain," he told reporters before talks began.

"The two leaders have reached a critical juncture in their talks. I encourage them to make the most of the moment and the momentum," he added.

"The prospect of a solution in Cyprus is within their reach. Expectations in both communities are high," he added, without taking questions about how the U.N. might try to steer the two sides to an agreement.

Anastasiades and Akıncı are both moderates leading their respective communities and the negotiations are directed towards reuniting Cyprus as a loose federation of two constituent, largely self-governing states.

Cyprus has been divided since 1974, when Turkey carried out a military intervention into its northern third as a guarantor power in response to an Athens-inspired coup seeking union with Greece. After the intervention, the Turkish Republic of Northern Cyprus (TRNC) was founded under the leadership of its late president Rauf Denktaş.

The last major peace push collapsed in 2004 when a proposal worked out by then-UN chief Kofi Annan was accepted by most Turkish Cypriots but resoundingly dismissed by Greek Cypriots in twin referendums.