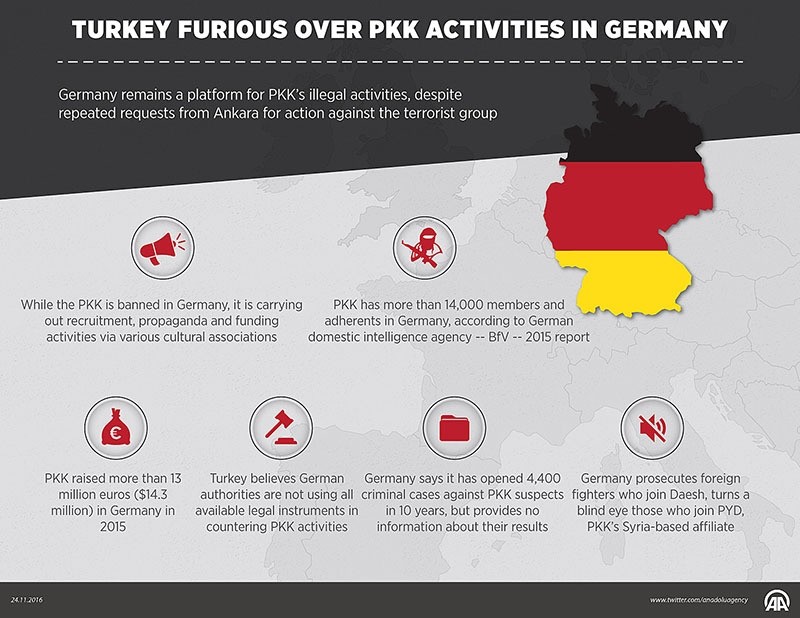 Germany remains a platform for the terrorist PKK's recruitment, propaganda and funding activities, according to official reports.

Although PKK is banned in Germany, which is home to a large Kurdish community, the terrorist group is carrying out significant activities via various cultural associations.

According to the BfV's annual report released in June, the PKK raised more than 13 million euros ($14.3 million) in Germany last year.

The group, which is listed as a terror organization by the EU and the U.S., is responsible for the deaths of more than 44,000 people in a decades-long campaign against Turkey, and it has recently intensified its terrorist attacks.

She argued that her government cannot influence the decision of judicial authorities concerning investigations on PKK activities.

"[In Germany] we have opened more than 4,000 court cases against PKK members. But politics cannot have an influence on the rulings of our independent judiciary; it accepts these rulings," she said.

Turkish officials have repeatedly criticized German authorities for not using all available legal instruments, in countering the activities of the PKK followers in Germany.

In response to a question by the Anadolu Agency, Germany's Federal Ministry of Justice said, courts have opened 4,400 criminal cases against PKK suspects between the years 2004-2013.

The suspects were accused for various crimes, including illegal fundraising, serious bodily injury or breach of the public peace.

But the Ministry said it has no information on the results of these criminal proceedings, and noted that all such inquiries should be referred to the relevant authorities in several federal states.

While Germany has adopted stricter legislation last year against foreign fighters, courts have so far avoided opening criminal investigations against German citizens or residents who traveled to Syria to join PYD, the PKK's Syria-based affiliate.

According to the German media reports, domestic intelligence believes more than 130 Germans so far traveled to Syria and joined the PYD.

German courts so far opened more than 100 court cases against radicals who traveled to Syria and Iraq to join the terrorist group Daesh.