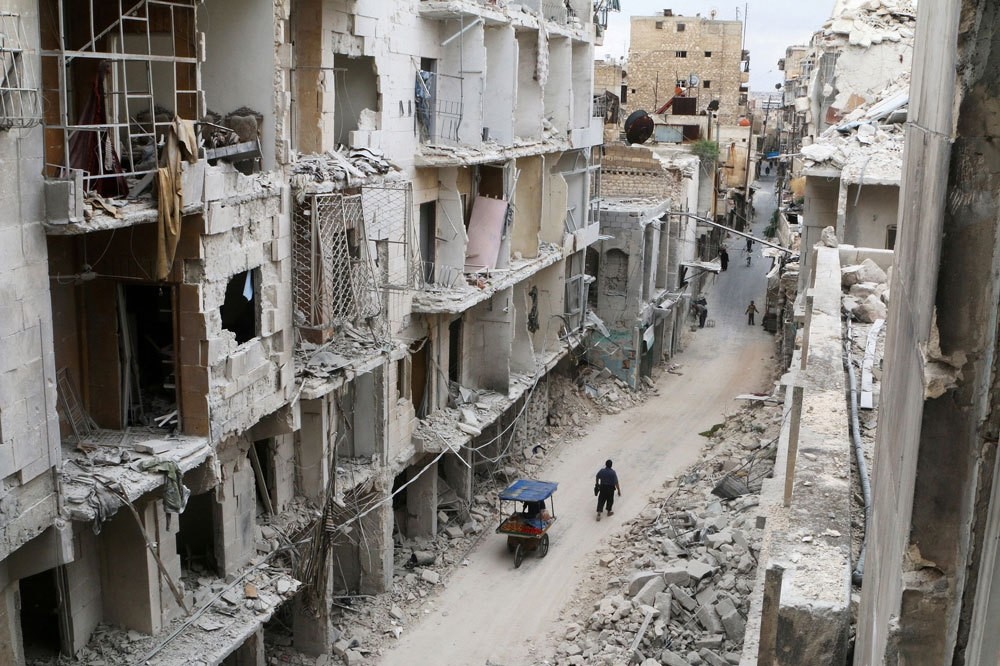 Desperate residents walk among the damaged buildings in the Old City of Aleppo, Syria, May 5. (Reuters Photo)
by Daily Sabah Dec 09, 2016 12:00 am

Turkey has termed the Syrian regime's indiscriminate attacks on civilians in Syria's historic city of Aleppo as "war crimes," raising concern over the escalating humanitarian crisis.

Speaking at a press conference in Ankara yesterday, Presidential spokesperson İbrahim Kalın said, "The developments in Aleppo are of serious concern for all of us. The regime continues to openly commit war crimes and crimes against humanity. We have witnessed that the person heading the regime is not open to any cease-fire or other solutions, as per his recent remarks made to the media. This is actually a reflection of the regime's intentions in Aleppo. We call for an end to the clashes and the delivery of humanitarian aid. We continue our diplomatic efforts for Aleppo."

Turkey has recently been carrying out an intense diplomatic discourse to halt the clashes in Aleppo, particularly with Russia. President Recep Tayyip Erdoğan has held several phone meetings with his Russian counterpart Vladimir Putin to reach a solution on the crisis. Meanwhile, Prime Minister Binali Yıldırım also held meetings with Russia's Prime Minister Dmitry Medvedev in a recent visit, during which he said both states are putting in efforts to reach a solution and cooperating to end the crisis. Russia has been backing Syria's Assad regime with severe bombardments against opposition areas since September 2015. In the case of Aleppo, Russia claims it does not carry out airstrikes in that area.

According to Anadolu Agency, nearly a thousand civilians have been killed and a few thousand have been injured in regime attacks in opposition-held parts of Aleppo, according to local civil defense officials. The indiscriminate bombardments put the city's civilians in a disastrous situation, forcing thousands to leave their hometown. Meanwhile, the attacks on the city's hospitals have also caused the medical operations to stop in the city, leaving the city with only a few doctors.

The presidential spokesperson also said that the PKK terrorist organization's Syrian affiliate, the People's Protection Units (YPG), are cooperating with the Assad regime in northern Aleppo.

The military began its assault on the East in mid-November, pounding opposition-held neighborhoods with airstrikes, barrel bomb attacks and artillery fire. The bombardment has caused a flow of civilians to flee out of the city to other areas.

The moderate opposition has recently requested a temporary cease-fire, for about five days, however it did not receive a positive response. On the other hand, Russia and China vetoed a U.N. Security Council resolution aiming at a seven-day cease-fire in the besieged city for the delivery of humanitarian and medical aid.