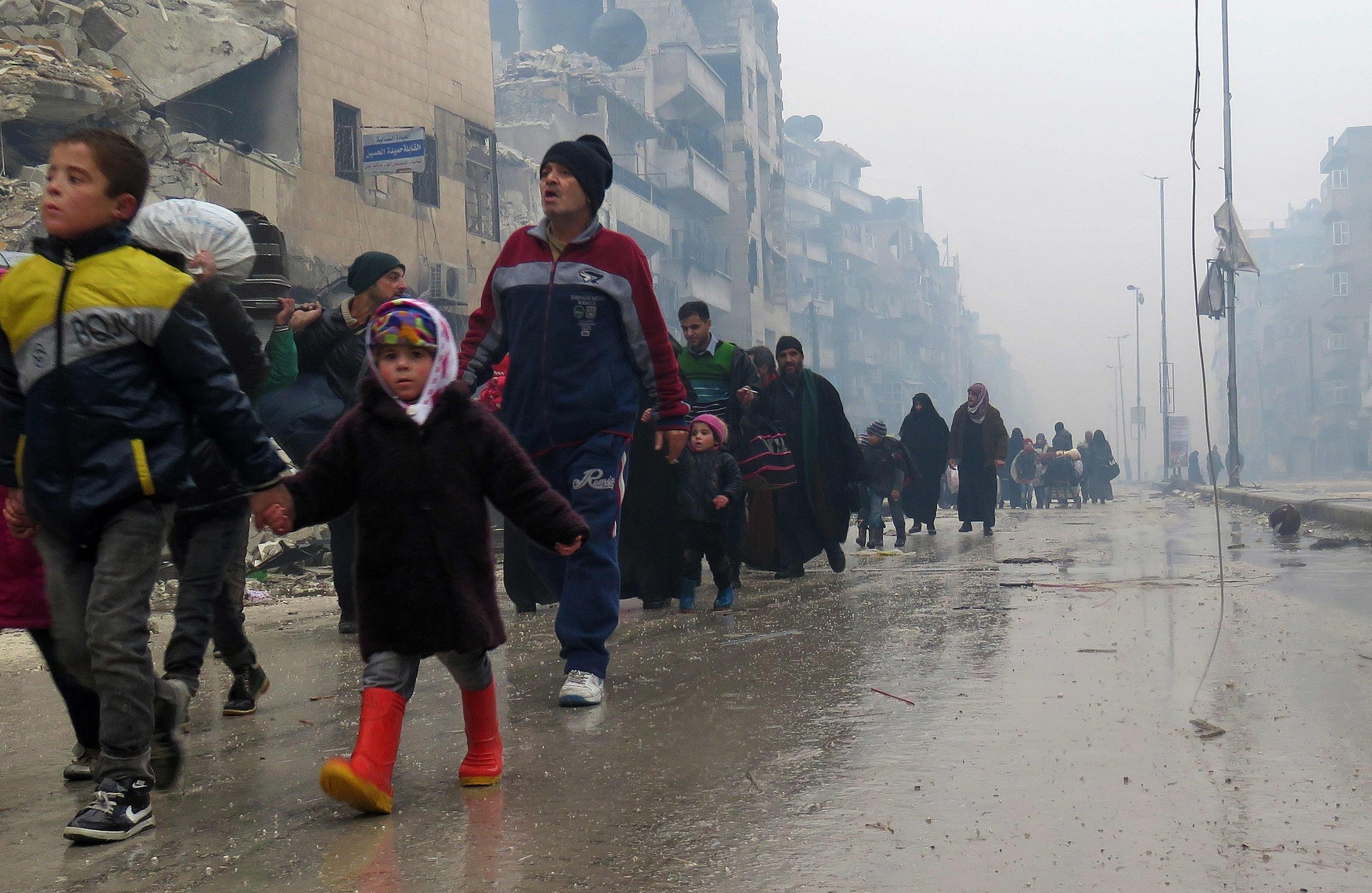 As the Syrian regime forces take control of almost the entire city of Aleppo, supported by Russian airstrikes and Iranian-backed Shiite militias, thousands of civilians trapped in the devastated city facing a massacre. While the entire world turns a blind eye to the heartbreaking human tragedy in Aleppo, Turkey has intensified efforts to open the way to set up a corridor to evacuate civilians

Despite the loyalists of the Assad regime and Iran-backed Shiite militias describing their advancement in northern Aleppo as a "victory," the entire world is watching with horror as innocent civilians are slaughtered and killed. The Syrian Observatory for Human Rights said on Tuesday that abandoned corpses are in the streets of Aleppo and "real massacres" were taking place in the city. A U.N. spokesman described the situation as a "complete meltdown of humanity." While the world fails to react to what is happening in Aleppo, Turkey is building initiatives to prevent a civilian massacre. "We are seeing in Aleppo perhaps the most relentless dimension of oppression in human history.

Hospitals were deliberately targeted in Aleppo with airstrikes to prevent the wounded from receiving treatment, and they are not being allowed to leave for treatment, either. Civilians were confined to starvation as humanitarian aid was prevented from reaching civilians," Turkish Foreign Minister Mevlüt Çavuşoğlu said on Tuesday in Ankara. "We are constantly discussing this issue with Russia, Iran and other countries. We meet constantly with Russia; this process is taking place unremittingly," Çavuşoğlu said while confirming reports that Turkish and Russian officials will meet in Turkey and discuss a cease-fire agreement and the opening of a corridor to evacuate civilians from Aleppo on Dec. 14.

Accordingly, the Turkish Foreign Ministry and intelligence officials will meet Wednesday with their Russian counterparts to discuss Aleppo, where more than 150,000 civilians remain trapped in areas still controlled by the opposition amid relentless regime attacks, air strikes and shellings.

In fact, Turkey's efforts to open a humanitarian corridor in Aleppo and establish a ceasefire in Syria have been ongoing for a while. Turkey has been putting intense diplomatic pressure toward solving the humanitarian crisis in Aleppo, including President Recep Tayyip Erdoğan's three telephone calls with Russian President Vladimir Putin regarding Aleppo and its surrounding region.

Russia has been backing Syria's Assad regime with severe bombardments against the opposition areas since September 2015. Iran-backed Shiite militias are also fighting in Aleppo, backing the Assad regime. According to various social media accounts, messages on Twitter and other social media sources, the international community is urging that immediate help be sent to evacuate civilians, as the Assad regime and Iran-backed Shiite militias continue to indiscriminately target thousands of civilians trapped inside small areas of Aleppo. The indiscriminate bombardments put the city's civilians in a terrible situation, forcing thousands to leave their hometown. Meanwhile, the attacks on the city's hospitals have also caused the medical operations to stop in the city, leaving the population with only a few doctors.

In addition, the Turkish Foreign Ministry released a statement late on Tuesday calling for an immediate halt of the Assad regime's attacks on civilians in Aleppo, urging their evacuation. The Ministry noted that the Assad regime has destroyed the fundamental infrastructure of key facilities, including hospitals, schools and water and electricity outlets in eastern Aleppo, which has been under intense attacks and place under siege.

The Ministry's statement reads, "And now the regime targets civilians and is carrying out mass executions on the civilian population, not giving a chance to those who want to leave the city."

It also highlighted that Turkey is outraged and horrified about the civilian massacres in eastern Aleppo, adding that such acts by the regime constitute human rights violations and that it is necessary to immediately evacuate trapped civilians under the surveillance of the U.N. and to allow humanitarian aid.

Turkish officials also met with their Iranian counterparts twice to discuss the situation Aleppo, in addition to various meetings with the U.S., EU and Gulf countries. Presidential spokesperson İbrahim Kalın said recently that the Assad regime openly commits war crimes and crimes against humanity in Aleppo while adding that Turkey will continue its efforts to establish a corridor to deliver humanitarian assistance to the people of Aleppo.

In the meantime, the commander of a rebel group in Aleppo is urging the U.S. and Turkey to move quickly to save civilians in what remains of the opposition's eastern Aleppo enclave from an assault by the government and its allies. The commander of the Jabha Shamiya group also told Reuters on Tuesday that the rebels' situation on the frontlines had improved in recent hours. The main problem, according to the commander, was the relentless bombardment of civilian areas by government forces in the "narrow area" still held by rebels, he said: "No state has helped these people in any way, my message to the world is to get these people out of this disaster-stricken city, at least the civilians," he said, singling out the U.S. and Turkey as governments with the power to do something.

Although details regarding today's meeting have yet to be released, Turkey is likely to propose an evacuation corridor for the civilians in Aleppo towards territory controlled by the Free Syrian Army (FSA) in Syria's northeast or opposition-controlled territory in the west.
RELATED TOPICS