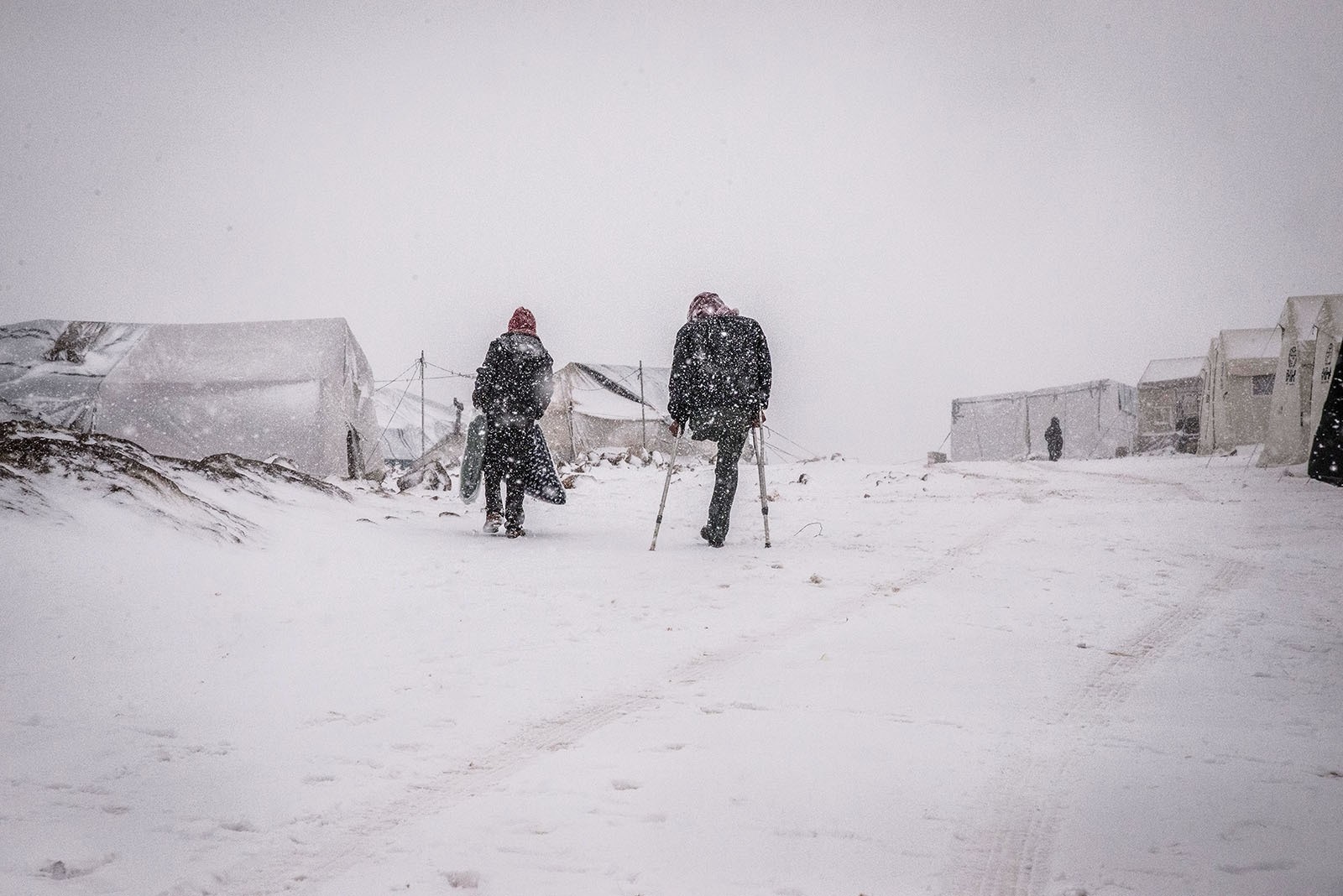 It was a freezing day in the southern Hatay province when I arrived at the Cilvegözü border gate on Dec. 21. Despite having prepared for such a chilly day, both physically and psychologically, I could feel the howling wind deep in my bones.

I knew that I was entering Syrian soil when I saw the "Güle Güle" sign near the last gate at the border, meaning "Good bye" in Turkish. I soon got my first glance of the Syrian town of İdlib, which is controlled by the Free Syrian Army (FSA). Arabic signs and shops greeted me in the rural parts of İdlib, where I was due to inspect a rocky field set aside for a Turkish Red Crescent tent camp.

It started to snow as we made a left toward the field in an off-road vehicle. There were already brand-new tents on the field set up by other Turkish non-governmental organizations (NGO). Trucks belonging to the Turkish Red Crescent were waiting for us, along with some 20-day laborers.

I was in luck when I heard two days before my arrival that it would actually be sunny in Syria, allowing the work to kick off before the snow accumulated. In the beginning, Turkish Red Crescent authorities taught the Syrian day laborers how to set up a refugee tent.

The Turkish Red Crescent, along with other Turkish NGOs, stepped up their work in and around İdlib after Turkey and Russia agreed on an evacuation process for tens of thousands of people trapped in the eastern parts of Aleppo after the city fell to the Assad regime last week.

More than 40,000 people have been evacuated from eastern Aleppo so far. While some of the evacuees settled in houses or with their relatives, many of them are still seeking safe haven elsewhere. Having seen the need, the Turkish Red Crescent quickly took steps to set up tent camps for the internally displaced people (IDPs).

The workers quickly learned how to erect a tent from the NGO authorities. Each tent was meant to shelter a family of five or six, at most. Thousands of Aleppo evacuees are expected to be settled in these tents.

After an hour, there were already six or seven tents at the ready. In spite of the freezing weather that almost froze my stiff fingers, the workers put on a self-sacrificing performance for their fellow citizens.

I decided to wander around the field, where many families that had been taking shelter for months resided. A kid, around 15-years-old, pulled me by the arm to show his family's dire situation. What I saw when I took a peek in the tent was heartbreaking. Five children, age's three to 10, were standing in the middle of the tent with their eyes on me. Their grandmother was apparently sick, stretched out on the cold ground. "Are you all from Aleppo?" was the first thing I could ask. Six children, two wives and the grandmother, as well as the father, have been living in the same tent in this rocky field for five months.

"In the summer, it is okay, but now it is cold, very cold. We need a heating stove," the father, 35-year-old Yaser, said. The grandmother turned to me with tearful eyes, saying: "I need a bed. Lying on this cold ground is killing me." The Turkish Red Crescent had not been able to legally enter into Syria to look after such IDPs living under poor conditions. Building this tent camp will give such IDPs living in the same field a chance to find shelter, as well.

The cease-fire and the evacuation deals have been breached several times by Iran-backed Shiite militias recently, leading to massacred civilians on several occasions. It remains in question whether the whole evacuation process will be completed without further escalations.

I walked on rocks covered with snow to another, but bigger, tent in comparison to those being put up by the Turkish Red Crescent. The brutality of the Syrian civil war and poverty made it possible for this family of 23 to live in a single camp. The father of the family, 55-year-old Ali, complained about their conditions. "Twenty children are hungry and out there in the cold. We are desperate to receive help," he said.

Eighteen-year-old Muhammad, who has a wife as well, helped me a lot in the field as an interpreter, despite his broken Turkish. He told me how IDPs and the innocent victims of the war in Syria have not been looked after by any country in the world, but Turkey. "We need beds and more tents, but at least Turkey was there to provide us with what we have," he asserted.

One of Muhammad's brothers, between three or four years old, fell to the muddy ground, leaving his hands covered in dirt. Muhammed went on to slam other countries for not lending a hand, while his brother burst into tears walking back into the tent with bare feet.

As I talked to the authorities from the Turkish Red Crescent on the ground, they mentioned their plans to seek a larger and better field for the Aleppo evacuees. The NGO has been searching for a field of around 9000-square-meters to host an alternate camp site. Once the tent camps are completed, the evacuees will be settled in, and basic needs such as food, baby food, heating stoves, blankets and beds will be provided.

Towards the end of the day, the sun, which had never truly shown that day, gradually lost its little influence on the weather, leaving us shivering. The workers were able to erect nearly 30 tents in around 4 hours. For people that had never done such a thing in their lives, setting up 30 tents for 150 to 180 IDPs in such short time, under harsh winter conditions, is remarkable.

Having heard complaints about the weather, such as "We are freezing," from the workers, the Turkish Red Crescent authorities called it a day. We got in our off-road vehicles and returned to the relatively-old highway. Compared to 5 hours ago, it was as if the streets were abandoned. The snow fell faster and stronger.

TURKEY WORRIES THE MOST ABOUT SYRIANS

I had an insightful conversation with Kadir Akgündüz, Turkish Red Crescent Humanitarian Relief Operation Syria Field Coordinator, on our way back to the border. He told me that foreign NGOs have been contributing greatly to the cause, however, there is a difference because they are completely funded by the United Nations, "The difference is that we are funded by the generosity of the Turkish people," Akgündüz said. He drew attention to the urgency of delivering humanitarian aid to the people in need. "Other NGOs need to prepare a project and submit it to the UN before receiving the funds. However, it might be too late," he contended.

"When we see an urgent humanitarian crisis and we step in. As you saw, we are quickly setting up a tent camp in rural Idlib for the Aleppo evacuees. This is where we differ from the others," he added.

As a country that shares hundreds of kilometers of border with Syria, Turkey has not turned a blind eye to the suffering of civilians reeling under the brutality of the civil war. "Turkey is the country that worries the most about the Syrian people. They would be left without any help right now if it was not for the Turkish people," Akgündüz said.

Looking back at my journey into rural İdlib, that left me almost paralyzed due to the freezing weather, one cannot actually appreciate on how much the authorities of the Turkish NGOs sacrifice under these harsh-winter conditions.

As the Bashar Assad regime continues to unleash its brutal power onto the innocent people of Syria, there can be no guaranteeing that İdlib will not be the next target. As I was leaving Syria to enter Turkish soil, the "Hoş Geldiniz" sign greeted me this time, meaning "Welcome," in English.

Two things were worth remembering for the rest of my life: The misery of children and the grandparents desperately waiting for help, and the relentless work of the Turkish Red Crescent authorities battling the freezing temperatures.