Assad's readiness to negotiate does not mean he is leaving 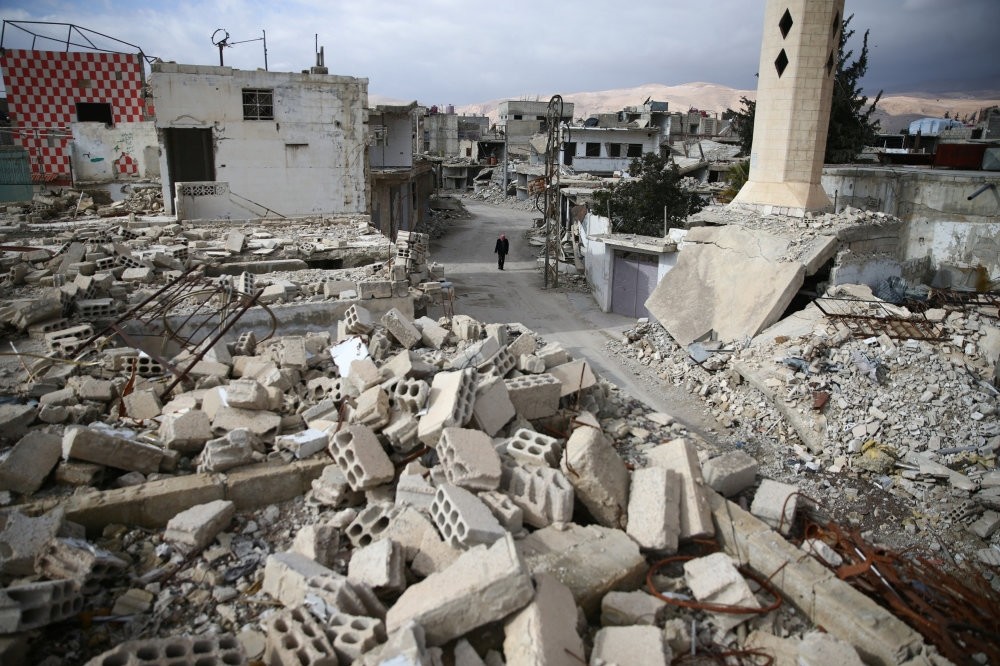 A man walks past damaged buildings in the rebel held besieged city of Douma, in the eastern Damascus suburb of Ghouta, Syria Jan. 8, 2017. Despite the cease-fire, the regimeu2019s bombardment still continues.
by Ali Ünal Jan 10, 2017 12:00 am

Experts say Bashar Assad's statement yesterday saying that he is ready to negotiate everything at the proposed Astana peace doesn't talks mean he will leave, pointing to Russian pressure on him as they want a permanent cease-fire in Syria

Even though the Syrian regime announced on Monday that it is ready to negotiate "everything" at the proposed Astana peace talks and that there are no limits to the negotiations, experts believe that this statement does not mean that Syria's Bashar Assad is ready to leave power immediately.

Syrian President Assad said on Monday that his government is ready to negotiate "on everything" during upcoming Russia and Turkey-brokered Syrian peace talks in Astana on Jan. 23. Assad said in an interview published by state media on Monday that there were still questions surrounding the talks including "who will be there from the other side." In response to a question asking if he is even ready to discuss his position as "president," he said "Yes, but my position is linked to the constitution. If they want to discuss this point they must discuss the constitution," he said.

He indicated that any constitutional matter must be put to a referendum, and it was up to the Syrian people to elect the president.According to a Syria expert from the Center for Middle Eastern Strategic Studies (ORSAM) Oytun Orhan, Assad's statement does not mean that he is ready to leave power. "There is serious Russian pressure on the Syrian administration and Iran to provide a political solution in Syria. We can also view Assad's statement as an explanation made by the influence of Russia. Assad stated that he could compromise to provide a solution.

However, it does not mean that Assad is ready to leave power immediately. On the other hand, Orhan believes that Assad's statement increases expectations for a permanent cease-fire in Syria and the emergence of a political solution in Astana. "Assad has not started the discussion related to his future until now and not allowed the questioning about his future. He made this statement to relieve the hands of Russia in the Astana negotiations." Underlining that Russia is eager for a political solution, he said, "For the sake of finding a common way with the Syrian opposition, even if Assad leaves power, he could reach a solution in Astana about continuing with someone within the regime,'' he added.

Syria expert Can Acun from the SETA Foundation, also underlined Russian pressure on Assad. "With the normalization of relations between Turkey and Russia, both sides agreed that conflicts in Syria should be finalized. Whereas Turkey has an impact on moderate opposition, Russia wants to provide a permanent cease-fire firstly and then provide a political solution by putting pressure on Assad."

However, Can Acun also said that Assad's forces are constantly violating the cease-fire. "In many places, especially in Eastern Ghouta, Assad forces and the Iran-backed Shiite militia are continuously violating the cease-fire. This is a cause to question Assad's sincerity," he said. Acun also added that he finds the idea of the Astana peace talks and a political resolution in Syria without Assad as "too optimistic." "Assad did open his future to discussion when he was in more difficult situations before this. His remarks could be a maneuver in order to take violations of the cease-fire off the agenda. I do not find a scenario that sees Assad leave power in the short and medium term very realistic," he concluded.
RELATED TOPICS