US says PYD should be included in Syria peace talks 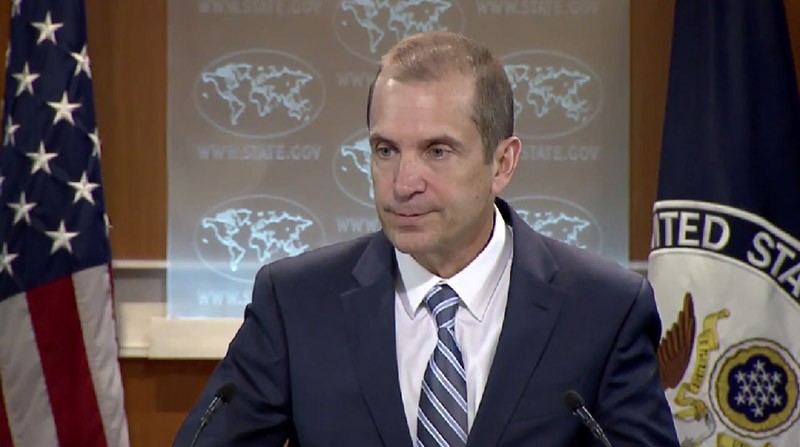 The U.S. continues to insist on the inclusion of the PKK terrorist organization's Syrian offshoot, the Democratic Union Party (PYD), in the Astana talks scheduled to be held on Jan. 23 at Kazakh capital Astana.

The PYD should be a participating party in any Syrian peace talks, a U.S. official said Tuesday.

"This process has to include all Syrians and that includes the Syrian Kurds," U.S. State Department spokesman Mark Toner told reporters.

When asked explicitly if the PYD should be at the table, Toner replied, "At some point they have to be part of this process."

Turkey considers the PYD and its armed wing the People's Protection Units (YPG) to be the Syrian offshoots of the PKK, which has been designated as a terrorist organization by the U.S., the EU and Turkey. However, Washington has refrained from taking a similar approach to the PYD-YPG, which is backed by the U.S. in the fight against Daesh under the umbrella of the Syrian Democratic Forces (SDF), much to the ire of Ankara.

"The U.S. is mindful of Turkey's concerns about this group," spokesman Toner said.

President Recep Tayyip Erdoğan and other Turkish officials have consistently emphasized that fighting the Daesh terrorist organization with other terrorist groups (such as the PYD-YPG) is wrong and may have negative consequences in the future.

Turkey has voiced concerns over the YPG moving into Manbij, which has a predominantly Arab population. Turkey has also warned that the YPG's movements are part of larger aims to make demographic changes in the areas captured from Daesh.

Meanwhile, the YPG presence has become a matter of political tension between Ankara and Washington. Ankara argues that U.S. support for the SDF - predominantly led by the YPG - is eventually being transferred to the PKK and ultimately used against Turkey.

Despite these warnings, Toner still insists that the PYD's inclusion is vital to the long sought-after political resolution to Syria's nearly six-year conflict.

Russia says no delay to Astana talks, will start Jan. 23

Talks on Syria's political future will take place in Kazakhstan's capital Astana on Jan. 23, a source in the Russian Foreign Ministry confirmed with the Agence France-Presse (AFP) on Wednesday.

"At this time, there is no indication that the meeting will be postponed. The date of Jan. 23 is set," the source said regarding the negotiations to be hosted by Russia and Turkey between the Syrian government and rebel groups.

Meanwhile, this week a Russian delegation was in Ankara to discuss technical details ahead of the Astana talks over Syria's future, Turkish diplomatic sources said yesterday.

The Russian delegation arrived in Ankara Tuesday to discuss details of the talks in the Kazakh capital Astana before returning to Moscow, said Turkish officials working with Russia and the Syrian opposition for the talks, and who asked not to be named, due to restrictions on talking to the media.

Officials added that preparations for the Astana talks have been accelerated amid an increasing number of ceasefire violations by the Assad regime in Syria.

According to Turkish officials, in the meeting with Russian officials, Turkey conveyed that work with the opposition to make the Astana meeting as productive as possible will continue, while saying that the ceasefire violations of the Assad regime have made these efforts difficult.