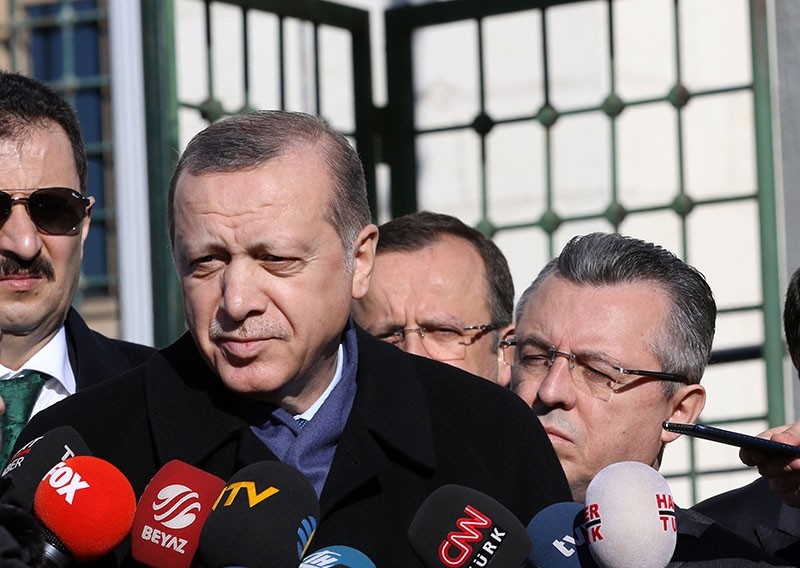 A snap election could be considered if the parliament becomes dysfunctional, President Recep Tayyip Erdoğan said on Friday, as deputies continue their heated discussion on the constitutional amendment package including a switch to presidential system.

Showing outrage at the recent, undemocratic and indecent actions that took place during the General Assembly meeting, the president said that "A deputy's nose was broken while another [deputy] was bitten on the leg. I hope all will [move forward] with common sense and a certain sense of decency in the future sessions."

Erdoğan also noted the progress of the ongoing voting process on various constitutional articles and emphasized that each article received a high level of supporting votes, ranging from 338 to 348, surpassing the 330 threshold. He added that if the rest of the bill receives votes within this range, the final say will be left to the Turkish people, naming the public as "the real decision makers."

Commenting on the rising trend of the euro and the dollar against the lira Erdoğan said :"The Turkish lira will be strengthened after trade in local currencies will be implemented." He called for the Turkish people to convert their foreign exchange savings to Turkish lira, to relieve the markets.

Meanwhile, by the end of the fourth day of discussions at the General Assembly in Parliament, eight of the 18 articles in the constitutional amendment package had been discussed and approved.

Namely, the General Assembly saw the approval of Article 1, which addresses the judiciary, redefining "independent courts" as "independent and impartial courts," emphasizing neutralism.

Addressing the structure, functionality, candidacy and parliamentary election process of the Turkish Parliament, Article 2 and Article 7 would increase the number of parliamentary deputies from 550 to 600 while lowering the candidacy age from 25 to 18 years of age. Furthermore, parliamentary and presidential elections will be renewed on the same day every five years, thereby removing parliamentary authority over the president's cabinet and no-confidence of censure, allowing the president to remain a member of his/her political party while also easing the criterion for presidential candidate nominations.

Article 8, on the other hand, will nullify the office of the prime minister, placing the president as the head of the executive branch and granting the president the authority to appoint members in his cabinet.