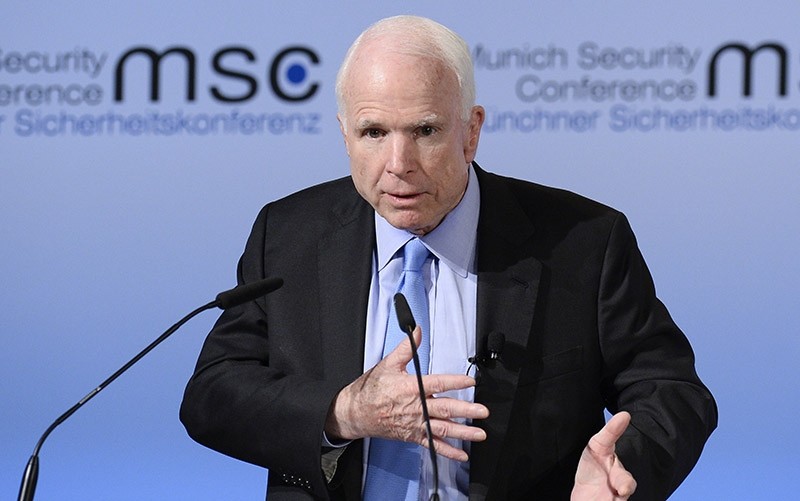 The U.S.-Turkey alliance is more important than ever to confront global threats, according to Chairman of the U.S. Senate Armed Services Committee John McCain, in a statement released following a meeting with Turkish President Recep Tayyip Erdoğan on Monday.

Senator McCain said that he had a "warm and constructive meeting" with President Erdoğan, noting that the partnership between the two countries is "more vital than ever" amid the growing disorder in Europe and the Middle East. The senator said, "Most of our discussion focused on the situation in Syria. The change of administration in the U.S. presents an important opportunity to review and reassess current policy in Syria," referring to the administration of newly elected U.S. President Donald Trump.

Relations between Turkey and the U.S. hit rock-bottom during the Obama administration due to several issues, including Ankara's concern about U.S. support of the PKK terrorist organization's Syrian offshoot, the Democratic Union Party (PYD) and its armed wing, the People's Protection Units (YPG) which are both terrorist groups under the guise of fighting Daesh in northern Syria. Under the Obama administration, Washington had been reluctant to arrest and extradite the leader of the Gülenist Terror Group (FETÖ), Fetullah Gülen, who is accused of masterminding the July 15 failed coup attempt in Turkey and infiltrating institutions of the Turkish state amid aims to topple the democratically elected government of the Republic of Turkey.

The senior Republican senator also said that the U.S. must cooperate with Turkey to defeat Daesh and build a balance of power in the war-torn region, citing President Erdoğan's proposal for the establishment of terror-free zones in Syria and retaking Raqqa from Daesh terrorists,two proposals which McCain said should be given serious consideration in Washington. McCain emphasized that cooperative efforts between Turkey and the U.S. to improve the situation in Syria and the region as a whole will serve the national security interests of both countries, adding that he is looking forward to working with both parties in this regard.

Turkish officials anticipate that President Trump will not repeat the mistakes made by the Obama administration regarding U.S.-Turkey relations, expressing Ankara's expectations for the extradition of terror leader Gülen and the halting of U.S. cooperation with the PYD/YPG.

Since Trump's arrival at the White House, there have been several high-level meetings between Ankara and Washington, including a Trump-Erdoğan teleconference, Foreign Minister Mevlut Çavuşoğlu's meeting with Rex Tillerson, U.S. Central Intelligence Agency (CIA) Director Mike Pompeo's visit to Ankara and the meeting between U.S. Vice President Mike Pence and Prime Minister Binali Yıldırım over the weekend in Munich, Germany.

In addition, U.S. Chairman of the Joint Chiefs of Staff Joseph Dunfordvisited Turkey last Friday where he met with Chief of General Staff General Hulusi Akar. During the meeting, the two generals discussed the position of Turkey and the U.S. with regards to the Raqqa operation, according to military sources.