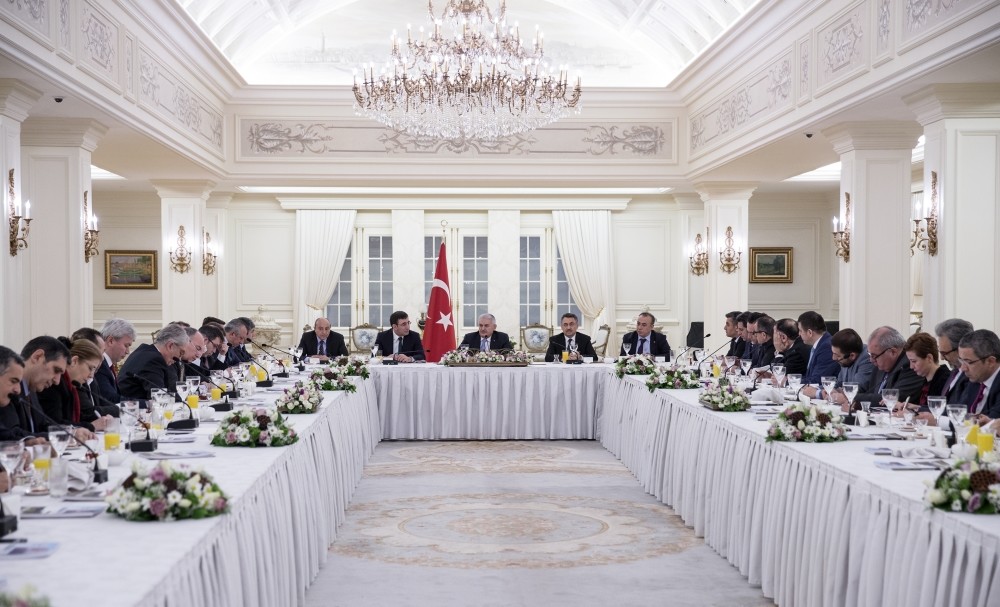 PM Yıldırım pointed to the Obama administration's failure to cooperate with Turkey and support of terror groups such as FETÖ and the YPG, as the main causes behind the negative U.S. perception among the Turkish public, and expressed his wish that the Trump administration act differently than his predecessor on these issues

The main prerequisite to amend the overwhelmingly negative attitude of the Turkish public toward the U.S. is for the new Trump administration to distance itself from the mistaken policies pursued by the previous administration on the Gülenist Terror Group (FETÖ) and the PKK's Syrian wing, the People's Protection Units (YPG), said Prime Minister Binali Yıldırım in a media briefing he held with senior journalists in Ankara Wednesday.

Turkish public anger is directed at the continued sheltering of FETÖ leader Fetullah Gülen in Pennsylvania, U.S. and the open support given to YPG in the fight against Daesh. FETÖ is the terrorist group responsible for the failed July 15 coup last year, which caused the death of close to 250 people. The Barack Obama administration's failure to extradite Gülen, coupled with the U.S. military backing of an affiliate of the PKK, which it recognizes as a terrorist group, have been the main causes behind the negative U.S. perception among the Turkish public. Yıldırım said that the U.S. and the YPG wanted to carry out the Raqqa operation together but Turkish efforts were directed to prevent this from happening. "This would mean strengthening the PKK. This is a matter of utmost importance for us," the prime minister said.

Yıldırım said he hoped the Trump administration will take action on FETÖ and the YPG and conduct its policies differently from Obama to reaffirm the strategic ties between the two NATO allies. Initial signs emanating from the new U.S. administration were encouraging, he added.

Yıldırım said it was not right to question the legal legitimacy of government decrees used in suspending public servants linked to the PKK or complicit in FETÖ's coup attempt, but added that such a process, which is allowed by the state of emergency declaration approved after the coup attempt, should not be too long. He said the process would continue along with efforts to ensure no one innocent is punished.

Meanwhile, Yıldırım commented on Greece's failure to extradite eight Turkish military officers who fled there after the coup attempt failed.

"Greece is our neighbor. You can pick your friends but not your neighbors. One needs to get along with one's neighbors but this doesn't mean one needs to constantly make concessions," he said. "For Greece and the rest of Europe, criticizing Turkey remains a good tool to pick up votes. We need to respect each other's laws. No country has the right to use Turkey as a domestic political tool. Turkey's stance with respect to the Aegean Sea and Cyprus remains known to all."

He referred to the continued Operation Euphrates Shield that is conducted in support of the moderate opposition Free Syrian Army (FSA) as a real alternative to the YPG in the fight against Daesh. "The U.S. wanted to arm the YPG to fight Daesh and we said use the FSA. Just look at the areas freed by the FSA. With Operation Euphrates Shield, Daesh was pushed back from a region to which civilians are returning. Peace and security is established. Schools, shops and courts have reopened. The FSA can do the same for the rest of Syria."

He said no one wanted Daesh or the YPG in the region. "Whenever it conquers a place, the YPG starts by ethnically cleansing Arabs. We won't stand for it. The U.S. assured us that the YPG will evacuate Manbij. We are now waiting for them to keep this promise."

On domestic opposition criticisms directed at President Recep Tayyip Erdoğan's statement that the Turkish military will expand Operation Euphrates Shield to free Manbij and Raqqa from terrorist elements, Yıldırım said: "This is done to fight terror where it is spreading from. With Operation Euphrates Shield, we both protect our own cities on the border with Syria while creating an opportunity for those refugees who sought shelter in Turkey to return to their homes."He also condemned German security operations targeting imams sent there by the Presidency of Religious Affairs (DİB, more commony known as Diyanet). "Accusing imams we sent there of being spies is unacceptable. These imams are employees of the Presidency of Religious Affairs and their duty is not to collect intelligence. Europe is being protected from extremism thanks to these imams, who explain the true Islam to the European public. That's why I told [German Chancellor Angela] Merkel that we are perturbed over accusation directed against these imams."

When asked about improving ties with the U.S. and its possible consequences for relations with Russia, Yıldırım said the two were entirely separate matters.

"Our areas of cooperation and context of the relationships are totally different. Russia has been a neighbor for centuries. Neither is an alternative for the other. We do not need to choose one over the other. We can get along fine with both."

Yıldırım also touched on the recent deterioration of ties with Iran, saying that Turkey would not allow sectarianism in the region and that its aim is to achieve regional peace for the benefit of all.

On the constitutional amendments to be put to vote on April 16, he asked the main opposition Republican People's Party (CHP) not to appease terrorists by campaigning for its rejection. The opposition Nationalist Movement Party (MHP) supported the changes that will pave the way for the introduction of a presidential system, while the CHP fought against it. The PKK has also called for its rejection.

However, he also added that the electorate was free to vote for or against the constitutional changes. "We do not have a say in how they vote. If we did, there would have been no need to hold a referendum.

Yıldırım said there were now backroom dealings going on with the MHP, adding, "Everything done is done out in the open. We cooperated for constitutional changes. As of now, there is no agreement on holding a joint referendum campaign. The two parties have differing political platforms but on this matter, we have a common purpose. During the campaign, these may be a few joint rallies but the campaigns of the two parties are separate."

Prime Minister Yıldırım also cited the Turkish Statistical Institute (TurkStat) figures released yesterday on happiness, noting that figures showed the public was happier in 2016 than in 2015 and praised transportation, security and health services. "In general, hope for future in the short- and medium-term has improved," he said.

The prime minister suggested that the spate of surveys on the referendum could not be trustworthy due to contradicting results.

"Everyone has become a pollster. The real test is on April 16. The rest is speculative," he said, adding that he expected a "meaningful yes," by which, he said, he meant whatever the people wanted. "The aim of our campaign is to persuade those who are undecided."

COMMITTEE ESTABLISHED TO ADDRESS GRIEVANCES AGAINST STATE OF EMERGENCY DECREES 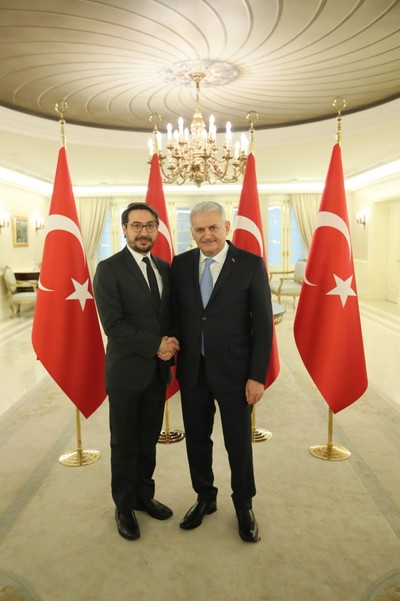 Prime Minister Yıldırım said the July 15 coup attempt had created a trauma and FETÖ, responsible for the act, still posed a threat. "More than 100,000 public servants were suspended or fired through governmental decrees. Mistakes can be made during such major operations and the necessary judicial process to rectify those mistakes is in place."

There were certain instances where judges ignored governmental decrees to disregard anonymous tips and started investigations without the necessary due process, Yıldırım said, adding that there were also officials who tried to exploit the anti-FETÖ operations to get back at some people. "As soon as the state of emergency was declared, we put in place certain regulations to prevent abuse. People are suspended or fired accordingly. Anyone can appeal this. There have been some 19,000 instances where such decisions were revoked. There are over 100,000 appeal applications."

Yıldırım said a State of Emergency Decrees Investigation Commission was founded to look into these appeals. "They will start looking into the applications within the next few weeks. Until now, people who took the decision to fire or suspend were looking into their own decisions. It was not fair but we had no other option. Now there is a legally accepted appeals process. People can take their grievances up to the European Court of Human Rights."

On the firing of academics, Yıldırım said: "There is an impression that the process was exploited by some who took advantage of the process to take revenge on others."

"The government released a set of principles that governed the process but had no way of investigating the decisions in detail," said the prime minister. "There are two ways one can be fired or suspended pending an investigation. They are either having links to the separatist group [PKK] or ties with the FETÖ. Without these two causes, no one should be fired or suspended."

He said universities sent a list of people who should be fired or suspended to the Higher Education Board (YÖK), which in turn sent the list to the Prime Ministry. "People on the lists are not assessed individually. That's not something we have the capacity to handle."

However, now those with grievances can apply to the committee to get their cases reassessed, he said. "Still, some academics are refusing to lodge applications. Their pride was hurt but there is a way to fix the mistake. "They should utilize their right to appeal."

The committee would consist of seven members and several subcommittees to handle the case load, Yıldırım added. "This is not something that will be finished in a few months. It will take a lot of work and a long time."