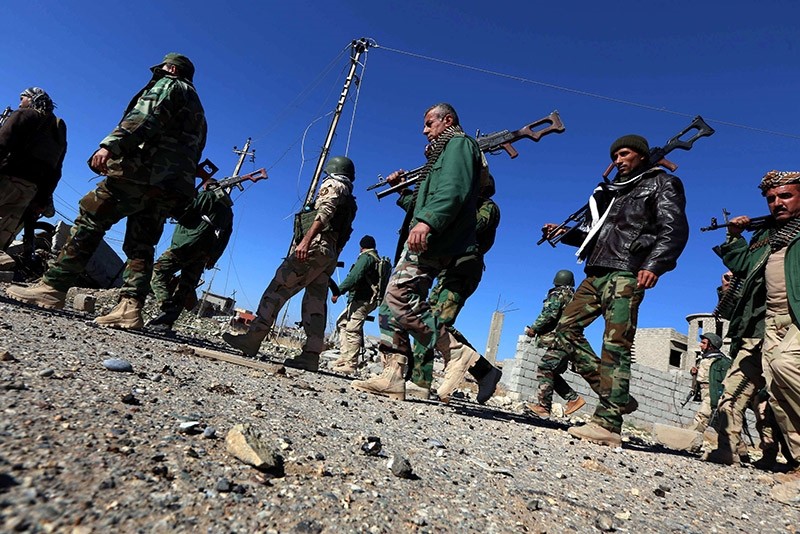 Kurdistan Regional Government's Peshmerga forces and fighters from the Yazidi minority enter the northern Iraqi town of Sinjar, in the Nineveh Province, on Nov. 13, 2015. (AFP Photo)
by Daily Sabah with Agencies Mar 03, 2017 12:00 am

Armed groups affiliated to the PKK terrorist group clashed with the Syrian peshmerga forces late Thursday in Iraq's northern Nineveh province, according to local sources. The incident came just days after Kurdistan Regional Government (KRG) leader Masoud Barzani's visit to Turkey, which has been targeted by PKK terrorist attacks since 1984. Barzani maintains close ties with Turkey, and his government has numerously called for the PKK to leave Sinjar.

"Our forces were prevented from entering the town of Snuny in Hanasur village [in Nineveh province] by the PKK's Sinjar defense units," Colonel Kadir Sheikh Mami, a commander of Syrian peshmerga forces (known as "Roj peshmerga ") allied with conservative Iraqi Kurdish leader Masoud Barzani, told Anadolu Agency. As 500 Syrian peshmerga fighters were deployed to the town of Snuny to reinforce the Iraq-Syria border and drive PKK terrorists out of Sinjar late Thursday, four Syrian peshmerga fighters and three PKK-linked terrorists were injured in the clashes, Mami said. The Kurdistan Democratic Party (KDP) Foreign Relations Office stated on their personal social media account that "A group close to the PKK attacked Rojava peshmarga in Snune and Khanaswr. The Kurdistan region sees this as a threat to the people and institutions of the KRG."

The KDP foreign relations further said, "The KRG will do what is necessary to protect Kurdistan and doesn't ask permission from anyone while moving peshmergas within its border," while urging to the PKK "to respect the KRG's right to govern and control within its borders" to avoid violence and bloodshed. Similarly to the KDP officials' statement, the Ezidi Assembly told Rudaw news agency that they are to publish a statement urging the PKK to withdraw from the Shangal region. While urging the PKK to completely withdraw from the area, the Yazidi Assembly in Iraq stated yesterday that they want "Snune, Shangal, Hanesur and all other regions to be connected to the KRG and be governed by the KRG."

Commenting on the incident, Foreign Minister Mevlüt Çavuşoğlu said Friday during a press briefing that the PKK posed "a threat against the legitimate regional government in northern Iraq and they are used by some countries against the current administration there." Minister Çavuşoğlu further continued by telling reporters in Ankara that "It's our duty to destroy these terrorist organizations wherever they are." Furthermore Defense Minister Fikri Işık stressed Friday that Turkey expects the PKK and Democratic Union Party (PYD) elements in northern Syria to withdraw to the east bank of the Euphrates. Minister Işık also said that the retreat of the PYD and PKK from Manbij is Turkey's priority, and that Turkey expects the U.S. to keep its commitment to remove members of the terror groups from the area.

"First Daesh left some areas for the [Assad] regime and now, as we see the PYD and the People's Protection Units (YPG) is withdrawing from some areas for the regime. This is actually evidence of cooperation between the PYD/YPG, Daesh and the regime," Işık added. Lt. Gen. Sergei Rudskoy, the chief of the Russian General Staff Main Operational Directorate, stated during a press briefing yesterday that the control of Manbij, an area occupied by the PKK-affiliate PYD/YPG, is being transferred to the Assad regime. Rudskoy further added that the Assad regime "is taking steps to resume the work of government officials in Manbij and the surrounding areas" beginning from March 3.