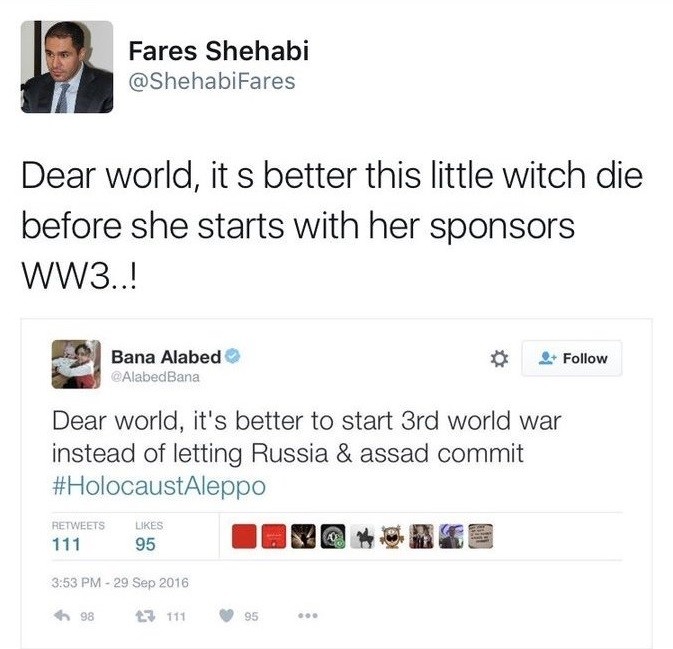 Fares Shehabi, the Assad regime's lawmaker for Aleppo, called for the death of Bana Alabed, describing her as a "little witch." Alabed is the 7-year-old Syrian girl who became the voice of children and adults trapped in Syria's Aleppo, where constant airstrikes and shelling by Russian and regime forces claimed lives and left thousands on the brink of death.

The tweet Shehabi posted on Monday, mentioning one of Alabed's tweets, read: "Dear world, it [i]s better this little witch die[s] before she starts with her sponsors WW3..!" He reportedly deleted his tweet a couple of hours after posting it, following reaction from social media users. 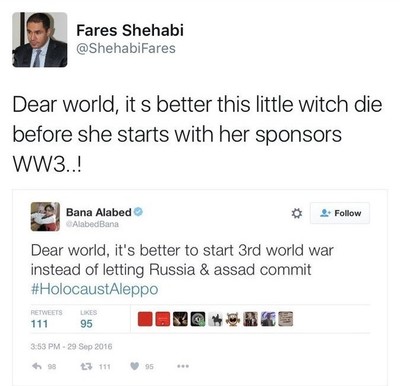 Posting tweets through a Twitter account run by her mother, Alabed put a human face on the drama of the thousands of civilians indiscriminately targeted by Bashar Assad's forces and Iran-backed militias in the five-year civil war in Syria, especially during the Aleppo siege. She frequently posted videos and pictures of her and her brother writing or reading in an attempt to distract themselves from the airstrikes.

With the fall of Aleppo, Alabed fled from home along with some 100,000 people, in fear of the atrocities committed by Assad's forces and Iran-backed militias who frequently opened fire on evacuees as they were heading out of the city during the evacuation process inititated by Turkey and Russia in late December. Turkey is getting ready tent camps for refugees in Idlib, some 7 kilometers (4.34 miles) from the Turkish border.

After evacuated from Aleppo, Alabed and her family were hosted by President Recep Tayyip Erdoğan at the Presidential Palace in Ankara, where the young girl extended Erdoğan the "greetings of the children of Aleppo," and thanked him for his efforts for the people of Aleppo. Alabed already has 363,000 followers on Twitter.