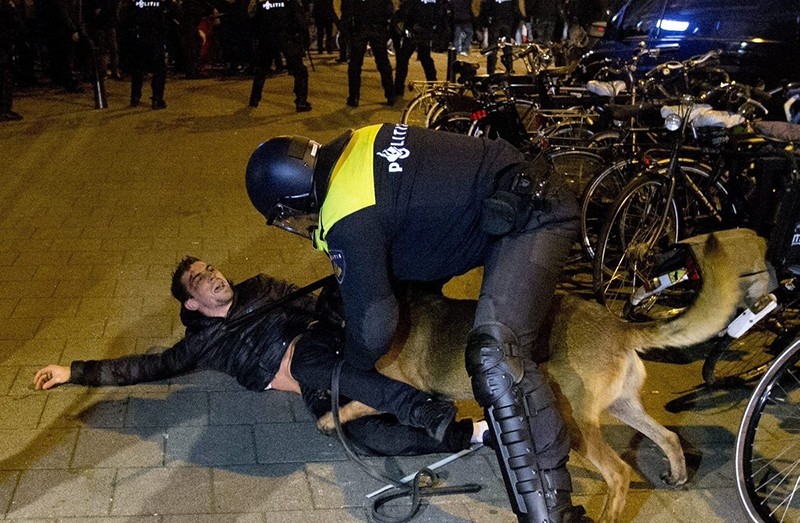 Foreign Minister Mevlüt Çavuşoğlu confirmed on Wednesday that the Health Ministry has taken the responsibility for the medical treatment of a Turkish citizen who was attacked by a Dutch police dog in Rotterdam, near the Turkish Consulate General, during a protest against the controversial bans on Turkish ministers.

Çavuşoğlu said that, the victim, Hüseyin Kurt, was transferred to Istanbul for better medical treatment.

"The Ministry of Health is carrying out his treatment. We will always continue to take care of our citizens under any circumstances," Çavuşoğlu said.

Hüseyin Kurt, our citizen brutally attacked by the police dog in Rotterdam was transferred to İstanbul to be given better medical treatment.

News and images of Kurt and other Turkish protesters being attacked by Dutch police made headlines while the ill treatment was slammed by Turkey.

On March 11, the Netherlands, in violation of diplomatic agreements, first denied landing permission to a flight carrying Çavuşoğlu and then proceeded to block a convoy carrying Family and Social Policies Minister Fatma Betül Sayan Kaya, forcing her to leave the country under police escort.

The ministers were scheduled to meet Turkish residents living in the Netherlands, ahead of Turkey's April 16 referendum on constitutional changes.