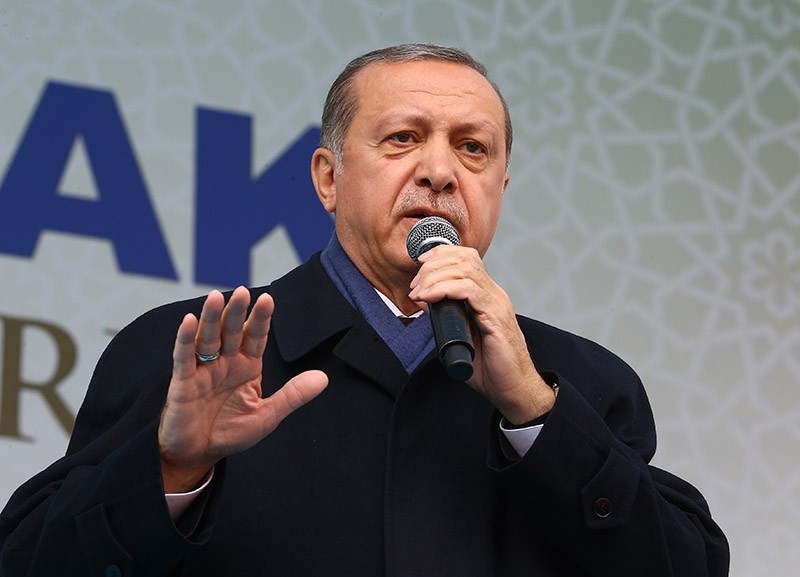 President Recep Tayyip Erdoğan urged Kurds in Iraq's Kirkuk to take down the flag of the Kurdistan Regional Government (KRG), warning that it might disrupt relations with Turkey.

Speaking at a "Yes" campaign rally for the April 16 constitutional reform referendum, Erdoğan said, "I find it wrong that a second [KRG] flag other than national [Iraqi] flag is hoisted in Kirkuk. The owners of this flag must know that this is separatism."

"I call on the KRG to repeal this wrong decision. Iraq's central government has warned them, we also warn from here. We absolutely would not accept the nonsense of 'Kirkuk belongs to Kurds.' Kirkuk belongs to eveyone, including Turks, Arabs and Kurds," Erdoğan said.

"Do not enter into such a bet with us, its price would be heavy. It would disrupt ties with Turkey. Remove these flags immediately!"

Last Thursday, the Kirkuk Governorate requested that the KPC raise the KRG flag alongside the Iraqi flag at local institutions and instated the use of Kurdish alongside Arabic. On Tuesday, KPC adopted a decision to raise the KRG flag in government buildings in a session boycotted by Arab and Turkmen members.

The Iraqi Parliament decided Saturday to reject the decision to hoist the flag of KRG alongside the flag of Iraq at government buildings.

The Council of Representatives also ruled to suspend the sale of oil extracted from Kirkuk, noting that the income from Kirkuk's oil belongs to all Iraqis as cited by Article 11 of the Iraqi constitution, and added that it should be distributed equally among the KRG and other Iraqi provinces.

The decision sparked widespread criticism in Turkey with many officials and politicians warning the KRG to avoid unilateral moves on Kirkuk. The Turkish Foreign Ministry expressed concerns on the decision, noting that the unilateral steps regarding the status of Kirkuk will damage dialogue between groups representing different ethnic and religious groups as well as breach the country's constitution.

Turkey's Presidential Spokesperson Ibrahim Kalın warned that move would be "wrong," stressing that Turkey, which has cordial ties with the KRG, "disapproves bringing up such a matter especially in the times when regional security risks are at their highest."

He further drew attention to the importance of maintaining the territorial integrity of Iraq and noted that "Iraq's possible separation according to ethnic and sectarian lines would not only be limited within the territory of Iraq but would rather spread throughout the region and everyone would pay the price for such a move," Kalın said while stressing that the matter must be analyzed in this regard.

The flag issue also came at a time when KRG leader Massoud Barzani made remarks on holding a possible referendum on independence at the "earliest time."

Moreover, the KPC ruled Tuesday to hold a referendum on the status of the disputed province and annexation by the northern Iraq's Kurdistan Regional Government (KRG) in a session that was boycotted by Turkmen and Arab members of the council.

Rebwar Talabani, the KPC's chairman, said in a press conference alongside other Kurdish members that the council had transmitted its decision to hold a referendum to the Iraqi federal government.

Talabani added that the Iraqi parliament's decision to use the Iraqi flag only in public institutions would not be recognized.

According to the unilateral decision by the KPC, the status of the city and surrounding area, cited as a disputed area by the Article 140 of the Iraqi constitution, will be determined by a referendum that will question whether the central government or the KRG should rule the province.

Foreign Minister Mevlüt Çavuşoğlu also spoke Tuesday regarding the decision: "The parliament in Kirkuk does not have such authorization. The Baghdad government alone can take a referendum decision. But it is clear that something is fishy here. These steps, especially during such a fragile time, risk the future of Iraq."

Kirkuk is among the disputed territories between the central government and the KRG, which is defined in Article 140 of the Iraqi constitution, adopted after U.S. invasion of Iraq and toppling of Saddam Hussein. Accordingly, the administrative statuses of these areas were to be determined with referendums by 2007, but the referendums have not been held so far due to political turmoil in the country.

Although the countryside of Kirkuk is predominantly inhabited by Kurds, the city itself is predominantly inhabited by Arabs and Iraqi Turkmens. The region was subjected to an Arabization policy during the Baath Party rule, but after 2003; this policy was reversed in favor of Kurds, prompting protests by the local Arab and Turkmen population and raised concerns in Ankara.