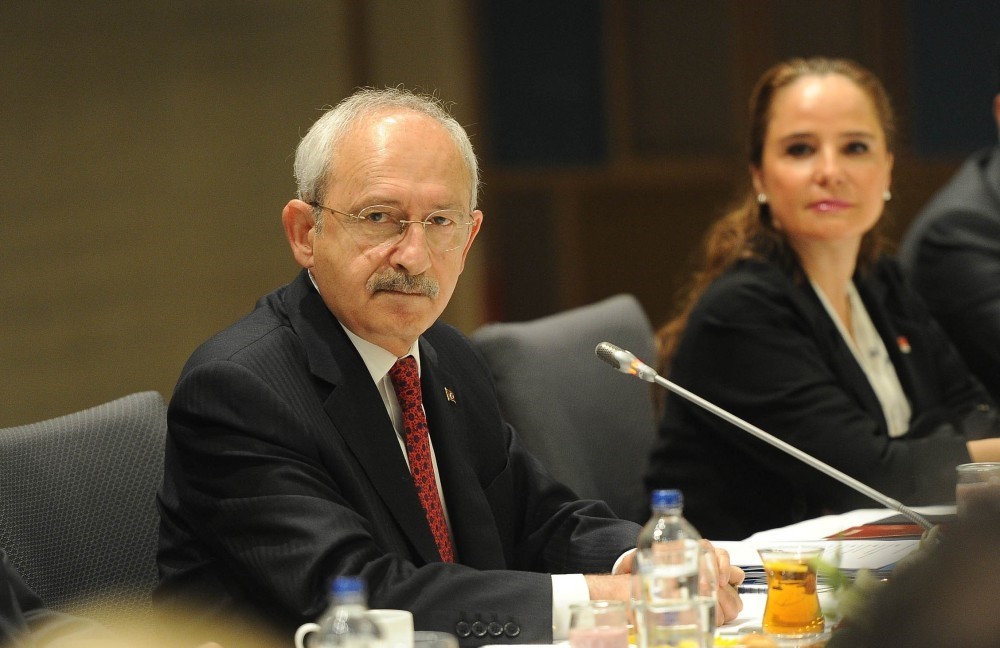 CHP Chairman Ku0131lu0131u00e7darou011flu was criticized by the government for not taking a strong stance against the deputies making undemocratic remarks.
by Daily Sabah Apr 05, 2017 12:00 am

Republican People's Party deputies have been criticized by ‘yes' campaign politicians for making undemocratic controversial remarks, where they threatened those in favor of the proposed changes, referring to them as enemies

Turkish politicians continue to express strong criticisms against the main opposition Republican People's Party (CHP) deputies' controversial remarks made against those in favor of the constitutional amendment over the weekend. Prime Minister Binali Yıldırım speaking yesterday in the central Anatolian province of Yozgat once more condemned CHP deputies Hüsnü Bozkurt and Deniz Baykal's scandalous remarks as he said, "shame on you." Though the CHP's Chairman Kemal Kılıçdaroğlu briefly commented on the 'threatening' remarks of the party's deputies, he however did not condemn or take action against his party's deputies. Kılıçdaroğlu, speaking in Ankara yesterday, said, "We must foremost hold our tongues before saying anything. Those who cannot hold their tongue cannot rule the country properly." While Kılıçdaroğlu's remarks were not satisfactory for many, the CHP's group deputy chairmen and deputies refrained to comment on the matter to Daily Sabah.

Meanwhile, President Recep Tayyip Erdoğan also criticized Kılıçdaroğlu's claims, saying, "If you have any files go ahead and expose them. Don't leave them to after the 16th, you will be ashamed. You always say you have files, whatever you said until now did not happen."

"We are now cleaning all Gülenist Terror Group (FETÖ) members in state institutions and we will continue removing them," he added during an inauguration ceremony in Turkey's northern Zonguldak province.The main opposition party deputy Bozkurt threatened those in favor of the constitutional amendment over the weekend as he referred to "yes" voters as enemies of Turkey. Analogous to Bozkurt, former chairman of the CHP and current Antalya deputy, Baykal, said they will celebrate April 16 as if it were Turkey winning its war of independence in the case of a "no" vote majority. Bozkurt even went further by threatening President Recep Tayyip Erdoğan and the Justice and Development Party (AK Party) by saying, "You will perish away just like Gadhafi, Saddam, Hitler and Mussolini did."

As the Ankara prosecutors launched an investigation on Monday into CHP Deputy Bozkurt over provoking public enmity during televised remarks, politicians continue to express their condemnations over the scandalous remarks. Speaking yesterday in İzmit, Turkey's Defense Minister Fikri Işık said, "Referring to those in favor of the constitutional change as enemies, is a major negligence, sacrilege and in fact a betrayal [to the people's will]." Similarly to Minister Işık, Sports and Youth Minister Akif Çağatay Kılıç stressed that CHP deputies'remarks are a clear indication of their "disrespect" to the people's will, and "disbelief" to the election ballot as well as democracy. "You [referring to Bozkurt] must immediately leave politics," Kılıç underlined.

Additionally, Turkish Interior Minister Süleyman Soylu also speaking yesterday in Manisa province as part of referendum campaign had a meeting with the representatives of the nongovernmental organizations and neighborhoods. Commenting on the statements by Baykal and Bozkurt, Soylu said that the current governing system is what supports and maintains such minded people referring to others as an enemy that Turkey encountered during the war of independence. Soylu harshly criticized Baykal and said "Although he hides himself, he eventually reveals his own real identity and personality… One must not end their political life in such unconscious way."

Meanwhile, CHP leader Kılıçdaroğlu commenting on the matter and only said "we [calling on his deputies] should try to stay away such language as much as possible." In regards to Kılıçdaroğlu's claims on the July 15 coup attempt being a "controlled coup attempt" as well as alleges on hiding list of ByLock [which is a communication application used by FETÖ] users from the AK party, the AK Party took legal action yesterday over false allegations. Prime Minister Yıldırım on late Monday night urged Kılıçdaroğlu once more in a televised interview to bring forward his evidences on the matter and stressed "it is a highly important claim." While noting that Yıldırım has no information on ByLock users in AK Party, the prime minister said, "We do not have such information and if Kılıçdaroğlu had obtained such information then he should go public with the matter and also submit it to the prosecutor's office."